What the world needs now is… the Father’s love

We sing about love coming down at Christmas, but do we really tell others about the great love the Father has for each of his children?

I want to do something different for this season of the year. I want to tell you a story – a true story of a dramatic event that happened on the slopes of a mountain high up in the Alps in Switzerland. It was January and the snow was thick and crisp. 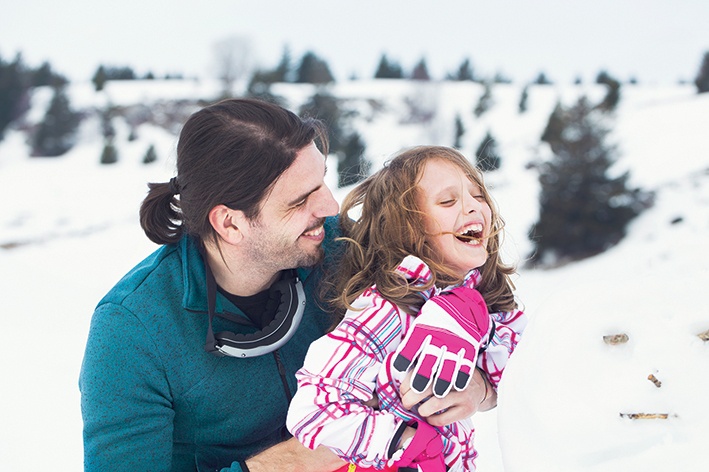 My wife and I were staying at a hotel on the outskirts of the little village of Adelboden. We were guest speakers at a conference of Christians working with students on university campuses.  They came from different parts of Europe for their annual get-together and they had invited us to do some biblical teaching.

It was the week when the World Cup was being held at Adelboden and we were free on the afternoon of the men’s downhill race.  We had seen such things on television, but here was an opportunity to see at first hand these young men flinging themselves down the mountainside at incredible speed, risking life and limb to shave milliseconds off their run time.

As we walked through the village and out towards the foot of the mountain slope, gazing up at the incredible beauty of the surrounding mountain peaks I had a strong sense of awe. It was not just the majestic scenery and an awareness of the God of Creation whose handiwork we were admiring, but I had a strong sense that God was trying to convey a message to me. So I was extra alert, watching all that was happening around me to see if there was something of significance.

But nothing extraordinary had happened by the end of the event and we began the slow climb back up the mountain path towards the village together with an enormous crowd of sightseers who had been cheering and encouraging the competitors. At one point the path became quite narrow and the crowd were pressed together, shuffling along as the path rounded a bend with the mountainside on our left and a low guard rail on the right. This guard rail was the only barrier to a steep slope leading to a drop onto rocks below.

Then suddenly the air was rent with the piercing screams of a child just alongside me. She had evidently missed her footing coming round the bend on the outside of the crowd, slipped under the guard rail and was now sliding fast down that steep slope towards the edge of the precipice.

I swung round and, together with hundreds of others, stood frozen to the spot, helplessly watching the small figure of a three- or four-year-old girl sliding down the mountainside, on her stomach, feet first, arms and legs outstretched, screaming with the full power of her lungs, her eyes looking imploringly upwards as she slid. I shall never forget the look of helpless terror in the child’s eyes as her body gathered speed on its way down towards certain death.

But suddenly, while her first screams were still echoing across the valley, a man leapt the guard rail and began running down the slope at an incredible speed so that he overtook the child and swooped her up into his arms stopping just short of the drop onto the rocks below.

For a moment, he was lost to sight in a flurry of snow as he stopped with the child in his arms, who was now sobbing loudly. The man stood there for a few moments before beginning the dangerous climb back up the snow-covered slope, testing each foothold before digging his boots deeply into the snow and slowly coming up to the pathway. Many arms were stretched out to help the man, whom I later learned was the child’s father, and to lift the little girl over the rail into the comfort of her mother’s arms.

At that moment I clearly heard the Lord say to me, “This is what I brought you here to see. Did you see how the child’s father did not hesitate to risk his life to save the child? That is how I love my children.”

I found myself responding, “Lord, your love is wonderful.”  But I immediately had a sense of rebuke as I felt the Lord saying that his love is at least as great as that of humans whom he has made in his own image – and a million times greater! And then came the words, “Tell my people I love them.”

I have often thought of this and asked myself, “If that had been my child, would I have run to save her?” I think I probably would, but of course the only thing I know for sure is that I did not go for someone else’s child.

There were many other men there but only the father ran to save his child. This, surely, is the message of Advent, that God so loved the world that he sent his only begotten Son to live and die for us, to save us from our sins.

This is a message that our world needs to hear. With so many children in our cities dying from knife crime, others being taken into care because of family breakdown, drugs and alcohol and fatherlessness – the love of our Father God is desperately needed. But, as Paul asks, “And how shall they hear without a preacher?” (Romans 10:14).

We sing about love coming down at Christmas, but do we really tell others about the great love the Father has for each of his children?

“Behold what manner of love the Father has bestowed on us,  that we should be called children of God!” (1 John 3:1).

Christmas and New Year are great opportunities for telling others about the love of God for his children.  Is there even one person to whom you will give this message at this time of the year?