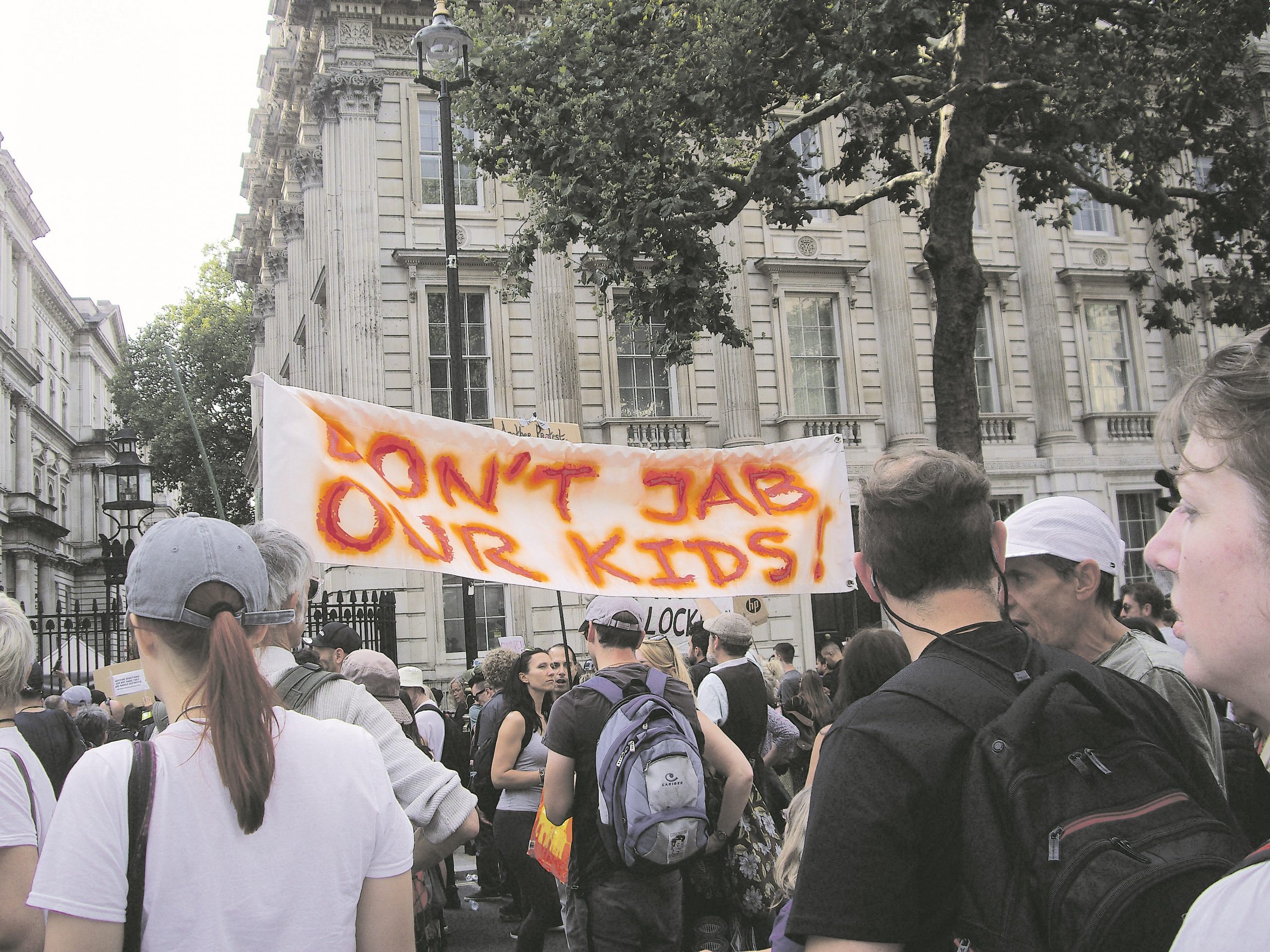 Are citizens’ protests protecting us from the segregation happening in other countries?

Am I the only one whose head is spinning from trying to keep up with the government’s flip-flopping over vaccine passports?

As I write this, the government has given us a reprieve from vaccine passports.

I’m calling it a ‘reprieve’, because the government’s position has changed almost monthly with different ministers giving different decrees.

However, its more lenient position sets the UK on a different trajectory to many other countries, where the unvaccinated are being banished from almost every indoor venue, including public transport, medical facilities and yes, churches.

Australia: no jab, no entry to church

Tony Blair’s recent proclamation that “vaccinated and non-vaccinated people should have different freedoms” is disturbing, but this is precisely how many governments are already treating citizens.

An Australian Christian news website, Caldron Pool, reported that “from mid-October, churches [in New South Wales] will be permitted to return to in-person worship on the provision that they only host vaccinated services”. This is the same country in which police officers wrestle to the ground citizens for not wearing a face mask outdoors.

In Nigeria, Edo State appeared to panic over four deaths in the ‘third wave’, so its council gave its residents two weeks to be vaccinated; from 15 September they would need their certificate to enter churches, mosques, banks and government offices.

UK Column reports that unvaccinated Pakistanis are prohibited from using motorways and from mid- October will need to be vaccinated to buy fuel.

Across the previously free world, thousands of protesters have been taking to the streets. Largely unreported by mainstream media, these uprisings are certainly noticed by those in power; such is the scale of revolt in France that many fear a full descent into a second French Revolution.

Was it the sight of a million people marching peacefully through London in June, July and August that changed our government’s mind over Covid passes?

Or perhaps it was because the government decided to finally follow the real science that shows vaccine passports are pointless from a medical perspective? Evidence gathered from around the world shows that vaccinated people still catch Covid and transmit it to others, so presenting proof of vaccination is irrelevant to public safety. For example, of the 1,798 Covid deaths recorded over the last six months by Public Health England, 70 per cent were vaccinated.

Israel is arguably the most vaccinated nation on earth, with almost two million third doses already administered, yet at 1,080 it has the highest infection rate per one million of population in the world (the highest ever during the pandemic anywhere). By comparison, America has a vaccination rate of around 50 per cent with 512 cases per million and India a vaccination rate of 13 per cent with only 25 cases per million; rather than mass vaccination, the Indian Health Department introduced the widespread prophylactic and therapeutic use of Ivermectin.

Israel’s Health Minister, Nitzan Horowitz was recently caught in an embarrassing hot mic moment admitting to another cabinet minister that vaccine passports had been mandated not to limit spread of the virus, but to coerce Israeli citizens into getting vaccinated.

The fact that vaccination does not prevent transmission removes all medical justification for sacking staff who refuse it. Six out of 10 UK care homes will be forced to sack unvaccinated care workers (The Telegraph, 23 August), leaving a serious staff shortage during crucial winter months. A New York hospital is suspending baby delivery services due to the number of employees resigning over vaccination mandates for staff (The Guardian, 13 September).

Are you a care worker who has lost work due to the CDC’s vaccination requirement?

If you’re looking for new clients, we’ll give you a free advert of up to 30 words.

William Wragg MP stated: “With recent analysis suggesting that vaccinated people carry as much of the virus as the unvaccinated into any setting, the government’s decision to go ahead could reasonably lead people to conclude that there is in fact no such basis. If the real goal is to drive vaccine uptake, then it is a deeply cynical approach that will be counterproductive.”

Based on current vaccination uptake, President Biden’s plan to mandate it for all companies employing over 100 staff will mean around 40 per cent of medical staff being forced to leave employment and almost 30 per cent of its Armed Forces being sacked. Where will this lunacy end?

Anathema to the Gospel

Perhaps church leaders declaring they would not allow proof of vaccination to be a condition of church admission also gave the government pause for thought? Rev Dr William Philip (a medical doctor before ordination) is one of over 1,800 UK church leaders to sign an open letter to the Prime Minister opposing vaccine passports.

He articulated the feeling of many Christians when he said: “It is impossible theologically for the Christian Church to close its doors to those who have been branded by society as socially undesirable. It is absolutely anathema to the Christian Gospel. It would be like the Lord Jesus Christ standing up and saying, ‘Well, come to me all you who labour and are heavy laden, except those of you who are sick, blind, tax collectors and sinners – you’ve got to produce your passport’.

“A Christian would never argue that physical health and protection is the ultimate thing. A Christian must say that eternal health is infinitely more important…To deny people entry to hear  this life-giving message and to receive this life-giving ministry would be a fundamental betrayal of Christ and the Gospel.”

Unfortunately, there are churches already enforcing either “no jab, no entry” or segregation between vaccinated and unvaccinated congregants in a way that could be described as vaccine apartheid.

They are emboldened by cabinet ministers and the press branding those cautious about the vaccine as selfish, dangerous and irresponsible “anti-vaxxers”.

This sinister rhetoric inflames hostility towards those who simply question an experimental gene therapy approved under emergency authorisation, for which there is no long term safety data – but for which there is already substantial evidence of serious adverse reactions, and deaths that already grossly exceed the numbers that prompted withdrawal of previous vaccines. For example, in 1976 the swine flu vaccine was withdrawn in America after only 25 deaths in 45 million vaccinated, whereas the CDC (Centers for Disease Control and Prevention) has so far recorded 13,000 Covid vaccine deaths; a number exceeding all other vaccine deaths combined for the last 30 years. Bearing in mind that it’s estimated only one per cent of adverse reactions are reported, the figure is far higher.

Replace the word “anti-vaxxers” with “Jews” and you are back in 1930s Germany. Replace it with “coloureds” and you are back in the American South during the 1950s. For example, unvaccinated French citizens are not just being refused entry to cafés and public transport; they risk arrest for trying.

Whatever caused the UK government’s sudden U-turn on vaccine passports, it has certainly granted this country a (probably temporary) reprieve from an evil currently running rampant in other parts of the world. For that mercy we should give God the glory and pray and express support for those living under this kind of tyranny.

Former vaccines minister Nadhim Zahawi promises that the UK government has no plans to introduce vaccine passports, while signing off multiple contracts for their implementation.

The government announces vaccine passports for entry into nightclubs and “other crowded venues”, contradicting not only previous promises, but also a June 2021 Commons Select Committee report concluding that there is no scientific justification for them, they are discriminatory, pose serious problems to data protection and no cost/benefit analysis had been done.

Advocacy group Christian Concern immediately seeks and receives government assurance that churches would be exempt from “other crowded venues”.

Health Secretary Sajid Javid reveals vaccine passports will be scrapped, together with parts of the Covid Act that conferred power to close businesses, restrict events and gatherings, disrupt education and detain infectious people. This is irrelevant, though, because the government previously enforced these measures under the 1984 Public Health Act, not the Covid Act. 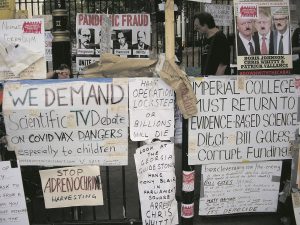 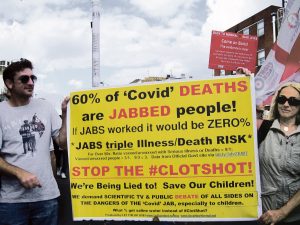 Above and right: Medical freedom demonstrators in London on 18 September. Marches also took place in other cities.Brave faces: Julian and Jane Sykes-Brown are barred from their own property after 11 November