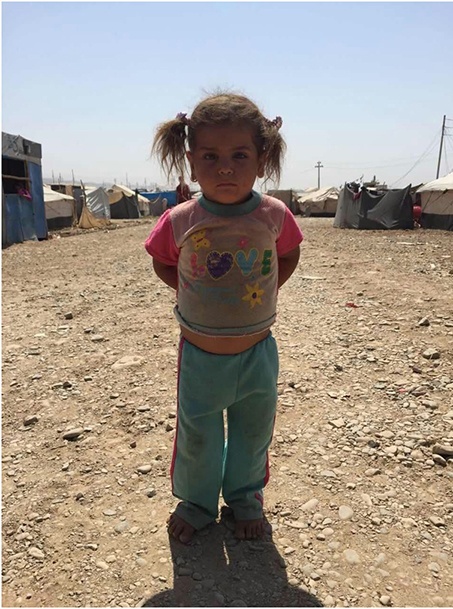 WHILE EUROPE IS CONCERNED ABOUT THE THOUSANDS OF REFUGEES WHO HAVE BEEN KNOCKING ON THIER DOORS, the Kurdish regional government has been proud to give asylum to approximately 1.8 million refugees in less than a year, distributed in dozens of camps in three provinces.

I headed a delegation of five humanitarian aid workers from Europe to one of the camps in the province of Sulaimaniyah this August. My companions were a Swede (Leif), a German (Krzysztof), a Polish (Jacek), and a Jew from Poland (David).

“Father, stay alive! please don’t die!” were Aylan Kurdi’s last words while his father was attempting to hold his family fast around him

This September, we got the opportunity to meet Abdullah, Aylan Kurdi’s father. Aylan was the three-year-old boy who drowned with his five-year-old brother and mother and was later found lying face-down on a beach near the Turkish resort of Bodrum.

Abdullah’s words were heartbreaking, especially when he was telling about Aylan’s last words asking his father to stay with them alive; “Father, stay alive! please don’t die!”, while his father was attempting to hold them fast around him.

When we asked Abdullah what our foundation (Bring Hope Humanitarian Foundation (BHHF)) could do for Kobane, he answered, “Please help suffering children so that they could have a better future and not face the same fate as my sons”. BHHF is working hard to supply children of Kobane with shoes and clothing before the extreme cold of winter arrives.

Particularly shocking for all of us was a visit to Rizgari camp in Sulaiymaniya. Here we found refugees from southern Iraq, Yezidi refugees from Sinjar, and Syrian refugees from Kobane. Children with worn clothing, no shoes, and obviously malnourished, are to be seen everywhere in the camp. The camp only had four hours of electricity a day.

We were horrified to come across an 11-year-old Arab boy from southern Iraq called Samir, who had burns covering about 40% of his body. He had not received any proper treatment, since this is not available locally. Less than 24 hours after our return, Mr Jacek found both funds and a hospital in Poland prepared to treat Samir. But hundreds of children are in Samir’s situation, in need of urgent healthcare which is not locally available.

The Bishop who heads the entire Iraqi Catholic community, in the Kurdish city of Erbil, told us that more than 125,000 Christians had fled from ISIS to the Kurdish area, which is a safe haven for these 1,800,000 refugees, regardless of their nationality, religion or cultural and ethnic background. The Bishop was grateful for the security and protection that Christians received from the local Kurdish government.

We are grateful for all the support you can give to these refugees, as they need every sort of help.