There WAS room INN Victoria Station for Jesus this Christmas!

Street preacher Roland Parsons has refused to let a previous escapade with the police deter him from reading the Bible aloud on Christmas Eve. 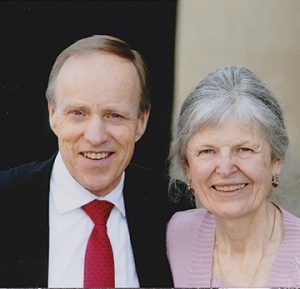 The preacher who wasn’t silenced: Roland Parsons, pictured with his wife Frances, boldly read the Bible aloud at Victoria Station on Christmas Eve

As a result of an incident in 2017 when an officer told him to stop reading the nativity account at Victoria Station, Roland says he originally had “no intention” of returning in 2018.

But after he discovered that a national ministry had mobilised their prayer supporters to pray
for him, Roland, along with his wife Frances, boldly returned to the station on 24 December 2018
and read from Luke 1.

The result was encouraging.

A Christian woman from the Middle East expressed delight at hearing the ‘Advent’ words from the Bible,” he says. “A woman from Bulgaria stood with us. A priest said he would use the words from the Gospel tract [we gave him] in his Christmas Day message.”

Roland’s experience will provide a glimmer of hope to readers who have followed recent cases of arrested street preachers such as Mike Overd.