Giving thanks for the Jews’ most precious gift to us

Just as the modern state of Israel was born out of the ashes of the Holocaust in perfect fulfilment of Ezekiel’s prophecy of dry bones coming back to life, so too did a new love for the Jewish people emerge from the rubble of Germany.

Shocked and devastated by the destruction of their home city of Darmstadt through the RAF bombing of September 11th, 1944, which saw twelve thousand killed and many more made homeless, Evangelical Sisterhood of Mary founder Basilea Schlink saw it as judgment for her country’s mass murder of the Jews.

But it stirred her heart to repentance and sorrow, as a result of which she launched a movement dedicated to confessing the sin of her nation and to making restitution with God’s chosen people, chiefly by loving and serving them in whatever way they could.

Now an international organisation with branches all over the world, they continue to bless the Jewish people as, full of the joy of Jesus, they demonstrate unbounding gratitude for their gift of the Scriptures and, most of all, of their Messiah.

My wife Linda and I recently attended the golden anniversary of the UK branch, based in a Hertfordshire village near London, when they looked back with amazement at the reconciling power of the cross beautifully modelled by the current residents – Sister Thekla from Germany and Sister Glory from England – representing the nations once at war with each other.

A measure of the impact they have made is apparent in the way they have been embraced by the local Jewish community, who have not only accepted invitations to their many events but have also in turn welcomed the sisters into their synagogues! 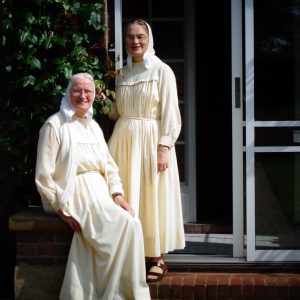 Sister Thekla (seated) and Sister Glory at Jesus’ Return, their home near London.

One of the sisters’ annual Israel Day events included the testimony of the son of a Nazi now reaching out in love to the Jews as part of his role as a disciple of Jesus. Half the audience on that occasion were from the Jewish community, one of whom later wrote: “We were overwhelmed by the event.”

Sister Thekla explained that, in sharing their shame and sorrow for the guilt of the nations, Jewish groups are greatly moved. “The smallest sign that we recognise what they went through touches them deeply.”

Bearing in mind that the name of their UK home is Jesus’ Return, the weekend theme was, appropriately, The Spirit and the bride say, ‘Come!’ (Rev 22.17) – a reference to the Second Coming. And as their house name implies, their focus is very much on Jesus himself and his soon return.

Always welcoming, praying, believing and encouraging, their irrepressible joy is impossible to ignore, proving a magnetic draw to the One they adore.

Against the background of Christianity’s guilt towards the Jewish nation, guest speaker Sister Verita, currently based at their Jerusalem branch and originally from New York, challenged us from Romans 11.11: “That is the call of the Church – making the Jews jealous, causing them to ask what is the source of the faith, hope, love and joy that we have in the Messiah (see Psalm 126).”

Above all, the sisters point to Jesus, who is the way, the truth and the life (John 14.6). But we have lost our way as a nation, and need to rediscover our true destiny.

This was brought home to us when we got temporarily lost after losing our GPS signal en route to the event. Even the road sign we were looking for was covered in foliage, an increasingly common sight across the country, causing Linda to remark: “In a year’s time, no-one will know where to go.”

A prophetic statement indeed for where we are today – lost in a fog of pointless activity as we struggle through a maze of no-through-roads, disconnected from the true source of life while blindly taking wrong turns down cul-de-sacs.

We desperately need to rediscover how to find our way through life, plugged into the Maker’s instructions rather than unreliable Satnavs. Jesus is the way!

We took a lovely walk in the Cotswolds on our journey back, but again got temporarily lost where the once well-worn path was overgrown. We needed to retrace our steps and get back on track.

As Jeremiah wrote, “This is what the Lord says: ‘Stand at the crossroads and look; ask for the ancient paths, ask where the good way is, and walk in it, and you will find rest for your souls’.” (Jer 6.16)

Jesus fulfilled that promise when he said: “Come to me, all you who are weary and burdened…and you will find rest for your souls.” (Matt 11.28f)