Working on the frontline of the global battle to rescue Jews from persecution is not for the faint-hearted. But former head-teacher, lecturer and pastor Fred Wright will stop at nothing to help God’s chosen people make the journey back to their ancient land. And, at 72, he shows few signs of slowing down. 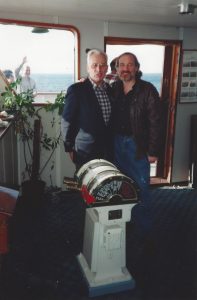 It was some 30 years ago that Dr Wright, of Colchester in Essex, gave up academia for the work of Aliyah (Jewish immigration to Israel). He has since risked his life and endured many hardships and privations in carrying out the task he believes all Gentile Christians should share.

As he points out, the Scriptures are clear that Jews from all corners of the world will eventually be gathered back to the Holy Land in preparation for their spiritual restoration to their Messiah, and that Gentiles will be called to assist them. (Isaiah 11.11, Ezekiel 36.26, Isaiah 49.22)

And in a new book1, A Banner to the Nations, launched to mark 30 years’ involvement in Christian Sponsored Aliyah since the fall of Communism, Fred recounts many inspiring stories of this phenomenal movement. A conference celebrating the anniversary will also be held in Sheffield on November 16 – at the Bushfire Church, 427 Halifax Road, Grenoside S35 8PB, starting 10.30am – featuring Fred, myself and the Sh’ma Kingdom Dancers. 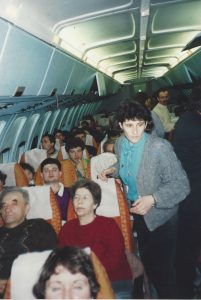 The first flight of Jewish emigrants from Siberia

In the few years I have known him, Fred has suffered physical challenges, setbacks of all descriptions and fought endless battles with red tape in his efforts to find new life and hope in Israel for thousands of Jews, often destitute and forgotten in dark and oppressive parts of the world like Eastern Europe and the former Soviet Union.

Along with Chesed-IM (Messianic Chesed in the former Soviet Union), he works alongside and is advisor to an organisation called Ezra UK, whose ministry is focused mainly on facilitating the required documentation needed – usually the biggest headache for those who have little actual proof of their Jewish heritage.

As an ex-serviceman, his military experience comes in handy for the frequent obstacles he encounters – but he is borne up by his passion for Jesus along with the knowledge that God is always there for him.

Among Fred’s many hazardous journeys were his missions to Ethiopia in a bid to help its largely-forgotten Jews finally return to the land of their forefathers after thousands of years.

On one trip he landed in a war zone as his arrival at the country’s capital, Addis Ababa, coincided with a rebel coup.

But his first visit there was almost as alarming, particularly the internal flight to Gondar, the ancient capital where there was still a significant Jewish presence.

“After the baggage check, a security interview took place in a rickety, curtained booth where I was repeatedly asked to hand over my gun, and it was difficult to convince them that I didn’t have one.

“My rapidly receding sense of safety and well-being was not encouraged when the pilot announced we would be flying at only around 600 feet as the entry door would not close properly. This was especially unnerving in view of the fact that we were in the region of Lake Tana, the headwaters of the Nile. Flying over the world’s most crocodile-infested waters in an overloaded plane with the door not properly shut is a great faith booster!

“At Gondar we saw a ragged huddle of people at the side of the road in a distressed condition. Asking our guides who they were, we were informed rather indifferently that they were Falashas – a derogatory term for Jews there. When further pressed, our informant said they would just stay there until they died because there was no-one to help them and no facilities. But we managed to arrange sleeping mats, fruit and water and subsequently transport them in two trucks to Addis to join those waiting to make Aliyah.”

Fred’s return, a couple of months later, just happened to coincide with the aforesaid coup, having only become aware of the storm into which he was heading through an on-flight newspaper headline.

“Upon landing, we were hurried to awaiting police cars and delivered to our respective hotels. As I began to unpack, I could hear a rumbling noise; as an ex-serviceman I recognized the smell of diesel and cordite – tanks approaching!

“Throughout the night, the sound of gunshot and the familiar rattles of firing squads and double execution shots haunted the darkness as the smells of war drifted through the night air.

“Our focus next day was to try to reach the Israeli compound and enquire whether we could help move some of the Jewish people living in the city to their comparative safety, which we did.

“The market area was strewn with an assortment of contorted bodies covered in flies and the stench of death and we were informed that all international outbound flights were cancelled as the rebels held the airport. 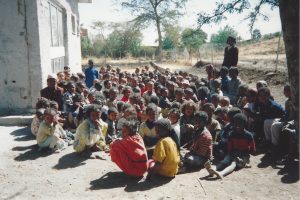 “But at the same time there was a flurry of activity with young boys rushing around, some barefoot, calling all the awaiting Falashas in the area to the compound. Suddenly, the sound of aircraft was heard. Groups of people were being ‘rounded up’ and surrounded by tape to keep them together as they were hurriedly rushed to the airport in special buses, each with an Israeli soldier of Ethiopian origin on board. The best-kept secret of the time, Operation Solomon, had begun.

“We worked through the night and next day, picking up people and taking them to the compound, helping with food and water supplies. We heard some news and rumours, but it was not until the initiative was completed that the enormity and scale of what had happened registered. The top-secret operation saw 34 planes, going on 41 sorties, to bring home to Israel some 14,500 Ethiopian Jews plus five more born in flight.”

Fred is married to Maria who has accompanied him on many of his adventures along with his youngest son Daniel.

1From KDF Chesed Publishing. The book is available online from Lulu Bookstore at www.lulu.com and from Ezra UK.