If you’ve ever wondered why today’s Church seems weak and ineffective, Charles Gardner has the answer 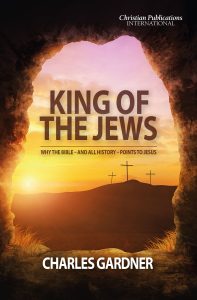 ‘King of the Jews: Why the Bible – And All History – Points to Jesus’

Today’s Church is weak because it sees (or wants to see) only half the story. So says Charles Gardner in his latest book.

In the author’s words: “The Western Church has somewhat lost sight of its Hebraic roots.”

Through the Jews came Jesus and the Gentiles then proclaimed his salvation to all. Having both Jewish and Gentile ancestry, this hit home with the author. He notes that Jesus demonstrated this point at the start of his ministry when he first healed a Jewish leper, and then the servant of a Roman centurion, a Gentile.

The rest of the book stresses that Jesus has not finished with the Jews. To this end, the author starts with the Jewish Tanakh (essentially the Old Testament) which, as the first disciples recognised, points clearly to Jesus, the true Jewish Messiah (Luke 24:32).

And when it comes to the mandated annual “feasts of the LORD” in Leviticus, the author writes: “They all point to the Messiah … every aspect of each festival has a perfect fulfilment in Yeshua (Jesus)”.

The Church is fundamentally weak once she ignores anything Jewish

Amazing! In fact, the feasts go on into the millennial reign of Christ, when the nations go up to worship the “King of the Jews” (Yeshua) at Jerusalem and to keep the Feast of Tabernacles (Zechariah 14). Does the Western Church realise this?

Clearly, as the author argues, the Church is fundamentally weak once she ignores anything Jewish. And except for a few “Christian Zionists” this is generally true for the Church in Britain.

In order to open the eyes of a sleepy, PC church, the book moves on to describe what is happening in the Middle East. For example, did you know that the Dead Sea is now coming to life? Freshwater fish have been observed swimming in new sink holes, and the reader is guided to Ezekiel 47 which talks about the future healing of the salt waters.

Or did you know that nearly half the world’s 14 million Jews have now emigrated to Israel (made ‘Aliyah’), in line with Ezekiel’s end-time prophecy (Ezekiel 37)?

The author claims Aliyah is not preached because it is “a political hot potato”. Neither is the “sign of the fig tree” in Matthew 24, which many assume refers to the end-time blossoming of
Israel.

Here the book makes an interesting observation. One line of theological thought sees the fig tree as a symbol of political Israel while the olive tree (as in Romans 11) represents the original purpose of the nation under God. Recall that Romans 11 refers to the end-time salvation of God’s chosen people Israel, so why does the Western Church not preach this?

The book rightly makes much of the current political scene; Israel has a hard time politically from other governments, with the shining exception of President Trump moving the US embassy to Jerusalem.

As far as Britain is concerned, Gardner has sharp words for the unbridled anti-Semitism in the Labour party under former leader Jeremy Corbyn.

And Britain’s stubborn refusal to back Israel and recognise Jerusalem as the historical Jewish capital is also criticised. In contrast, President Trump’s actions over Jerusalem seem like “a breath of fresh air”.

In fact, Britain failed the Jews miserably in World War 2 when she reneged on her Palestine Mandate and restricted Jewish immigration to Israel. Did this initiate God’s curse on Britain, as in Genesis 12:3?

When it comes to the Middle East, the current Russian-Iranian alliance is a clear danger to Israel, but the author stands on the fact that “the God of Israel rules”. Prophecy says such aggression will be defeated.

In conclusion, Gardner makes the following perceptive observation: “Christians who know their Bible and are committed to following Jesus are also serious about their love for Jews.”

Conversely, if we don’t love the Jews, how much do we really love Jesus? Even more to the point, he asks: “Why do most British Christians not get the connection between following Jesus and befriending the Jews? Could it be something to do with Pentecost?”

Has he touched a raw nerve here? Does the Church need a move of the Spirit?