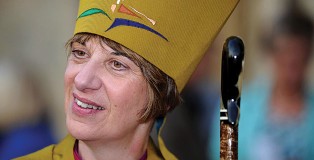 Almost 80 British and American church leaders supported the protest, one year after economic sanctions on Iran were lifted. They demanded government action to prevent persecution of Christians and other minorities in the Islamic state. END_OF_DOCUMENT_TOKEN_TO_BE_REPLACED

It is becoming increasingly difficult for Muslims to go on claiming that Islam is a religion of peace. The mounting evidence of violence contradicts this as Jihadists carry out unspeakable atrocities in the name of Allah. The Paris attack upon unarmed journalists sitting in an editorial meeting was a cowardly act of barbarism which was rightly condemned throughout the world. Once again, this violent attack on a soft target was carried out in the name of the Islamic god Allah END_OF_DOCUMENT_TOKEN_TO_BE_REPLACED