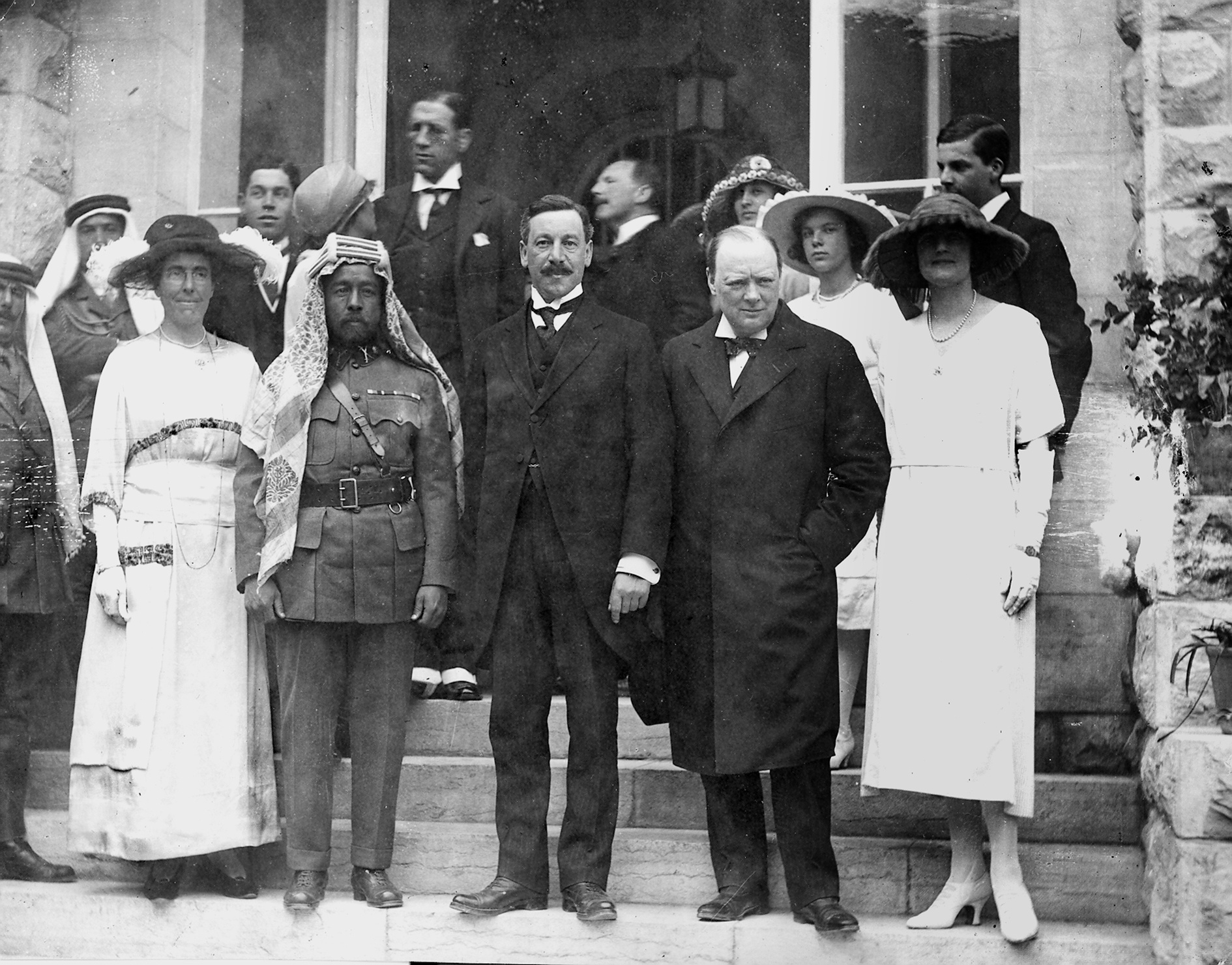 Photo: Mr and Mrs Winston Churchill (right), Sir Herbert Samuel (middle) and the Emir Abdullah (left of Samuel) on the front steps of Government House in Jerusalem, 28 March, 1921. This was the first of only two occasions when Churchill visited Palestine (Photo from Central Zionist Archives in Jerusalem)

Churchill’s biographers paint him as a lifelong Zionist, but his reputation was tarnished among many evangelical Christians over his early role in the rebirth of the State of Israel. Recent research shows he has been misjudged

For decades, many evangelical Christians have believed that Churchill, for all his heroic qualities as a great war leader in World War II, betrayed the Jewish people by giving away 77 per cent of the land that had already been allotted to them under international law.

But filmmaker Hugh Kitson, whose most recent film, ‘Whose Land?’ details the legal situation around the birth of Israel, says, “I think Churchill has been maligned over this – his motive can’t be faulted.”

It was believed that a key conference held at San Remo, Italy, in 1920 defined the borders of the Mandate for Palestine. But Churchill’s reputation was tarnished by the apparent outcome of a conference he hosted in Cairo in 1921, a year later. It has been said that he decided to give away over two-thirds of the homeland promised to the Jews – Transjordan – to the Arabs. (Article 25, allowing this, was added to the Mandate for Palestine in 1922.)

Churchill’s motive, it was assumed, was to appease Abdullah (a son of the Sherif of Mecca with whom Britain had a war-time agreement), in order to stop him attacking the French in Syria.

But recent research reveals that Churchill was more kindly disposed towards the Jewish people than has previously been believed. Indeed, ‘Churchill’s betrayal’ probably became the accepted version of events because key records did not become public for about three and a half decades.

Researcher Dr Elizabeth Allan was one of those who discovered from the San Remo Minutes of 1920 that the borders of the Mandate for Palestine were NOT in fact set at the conference, and the Supreme Council (of the WWI Allies) decided to settle the boundaries later.

He inherited the Middle East tinderbox

When Churchill was appointed Secretary of State for the Colonies in 1921, he was new in the post, yet had inherited the Middle East tinderbox. Thus, Hugh Kitson explains, “He had to rely heavily on the advice of the Foreign Office.”

Convening a conference at Cairo for March 1921, Churchill assembled 15 members of the Palestine political and military committee. At this key meeting, Churchill is supposed to have “chopped off’ 77 per cent of land previously allotted as a Jewish national homeland and given the area later known as Transjordan to the Arabs.

But the Cairo minutes show the territory had still not been promised as part of the Jewish national home.

“Rather,” Dr. Allan explains, “under the recommendation of the Colonial Office’s new Middle East Department, Churchill greatly expanded the area under consideration and incorporated the entire area east of the Jordan under the Mandate for Palestine, but simultaneously disapplied the Jewish national home sections of the Mandate to the area east of the Jordan (including the area where two and a half tribes of Israel had dwelled in biblical times).

“Yes, Churchill assigned Transjordan solely for the Arabs, which deeply disappointed the Zionists. But it appears from the archives that Churchill’s reasons for making the decisions he did were actually intended to protect the Jews, as well as fulfilling commitments to the Arabs.”

Churchill had invited Col T E Lawrence (‘Lawrence of Arabia’) to be his Arab Affairs Adviser, and had asked Lawrence to meet the Emir Faisal, a son of the Sherif of Mecca, who represented the Arabs in the post-WWI deliberations

Elizabeth Allan explains that the outcome of Lawrence’s private discussions with Faisal, communicated on 17 January 1921 to Churchill’s Private Secretary, was that Faisal had “agreed to abandon his father’s claim to Palestine.”

She says, “The initiative for this agreement probably came from Churchill himself. Churchill wanted to guarantee that the Jews in Palestine would be safe from external aggression.

“This was no small concession from Faisal, as he himself had been proclaimed King of Syria including Palestine a year earlier by the Syrian Congress, before being ejected by the French who had been given the Mandate for Syria. His brother Abdullah was marching north through Transjordan to help restore him to the throne.

“In turn for agreeing to abandon his father’s claim to Palestine, Faisal had four ‘questions’ – mainly linked to Britain’s conditional war-time agreements with his father, the Sherif of Mecca – regarding Mesopotamia, Transjordan, ibn Saud and Yemen. The decisions Churchill made at the Cairo Conference two months later meant that these conditions were in effect met.”

Churchill also wanted to stop the Arab raiding bands which had been crossing the Jordan and attacking the Jews. He believed Abdullah could be leant upon to stop these and in addition halt anti-Jewish disturbances and propaganda. He wanted Abdullah to prevent anti-French activity in the north (including Abdullah’s own plans to attack the French!). To assist with all this, Churchill said Britain must provide troops or money.

“Under these conditions, he offered Abdullah the post of Governor of Transjordan under the Mandate for Palestine. Additionally, Faisal became ruler in the British Mandate for Mesopotamia,” Elizabeth Allan says.

“Thus Churchill must have believed he was protecting a Jewish national home within the area west of the Jordan – whether from local aggression from the east of the Jordan, or further afield from the wider Arab Middle East. He must also have believed that his plan fulfilled – as much as possible – British war-time commitments to both the Jews and the Arabs.

San Remo – a cause for celebration

San Remo’s centenary this April will be celebrated by the Jewish and Christian communities because it marks not only the centenary of Great Britain being granted the Mandate for Palestine, but also the decision of the international community to recognise, legally, the right of the Jewish people to establish their national home in their ancient land.