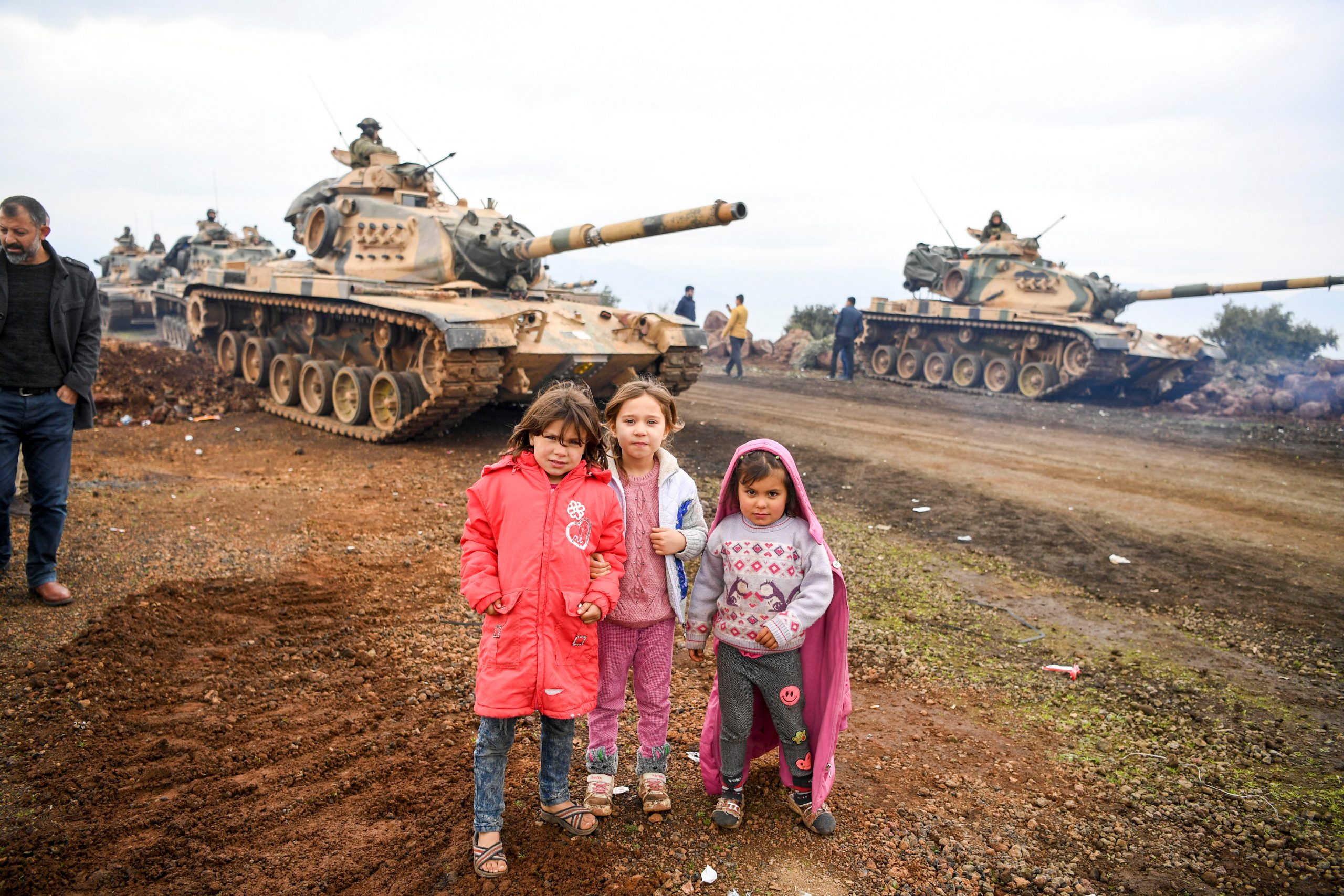 Turkish invasion could wipe out cradle of Christianity

by Andrew Boyd and Andrew Halloway

An uncertain future: will these children, living as refugees in Erbil, Kurdistan, be the last generation of Christians in Iraq and Syria?

Christians are set to flee Syria and Iraq again as the Turkish invasion is turning northern Syria into a ‘death zone’.

Despite the ceasefires Turkey has agreed with the USA and Russia, Turkey stands accused of continuing its military intervention against the Kurds in north-east Syria.

Christians fear that the religious cleansing begun in the infamous Armenian Christian genocide in World War 1 may now start again.

Turkish-backed forces have been attacking villages along the Khabur River where Assyrian Christians have lived since fleeing Turkey over a hundred years ago. The Syriac Assyrian Military Council, a Christian group, repelled the first incursions at the end of October, but it seems there is little hope for them without outside help.

Inside the border zone that Turkey has invaded, a small Christian relief group called the Free Burma Rangers (FBR) reports that the ceasefire is a sham.

A fresh exodus of Iraqi Christians is now expected. Jamal Liddawi, a partner of Release International, which supports refugees in Iraq, warns that Christians feel threatened both by the Turkish invasion of Syria and growing protests in Baghdad.

He said, “Islamic State has sleeper cells. If Isis is finished today, then another movement with a different name will just come and replace it. That’s why the Christians want to leave.”

Of the 300,000 Christians remaining in Iraq from a peak of 1.8 million in 2000, most have lost hope, reports Liddawi. “Many of them are applying to leave the country, and if they can, they will. The Kurdistan government in northern Iraq is preparing for between 100,000 and 200,000 refugees.”

The threat extends to the West, warns Juliana Taimoorazy, an Assyrian Christian, who is founder and president of the Iraqi Christian Relief Council. “As the cradle of Christianity empties and everybody migrates to the West, radical Islam will be on the rise because there is no buffer between the Islamic East and the Christian West.”

Betrayed and neglected, many Iraqi Christians have been refugees several times over

Many have lost the desire to rebuild again

The Kurdish people in northern Iraq were shocked by the American decision to pull their troops out of Syria, which precipitated the Turkish invasion in early October.

Their militia, the YPG, had played an important role in defeating Isis. Until Turkey invaded, they had been guarding thousands of Isis prisoners, but after the invasion YPG troops have been diverted to the front line, resulting in prisoner breakouts.

“The Kurds feel betrayed by the US decision to take their troops out of the north,” says Jamal Liddawi. “They believe it has given the Turks the right to invade the Kurdish area in Syria. Many people have been killed. This has impacted Kurdistan because even more refugees are now coming into the region. Everybody’s confused and shocked by the decision.”

The recent death of Islamic State leader, Abu Bakr al-Baghdadi, will do little to allay the growing fears of the Christian community in the region. Baghdadi blew himself up, along with his children, in a surprise attack by US special forces.

But even though the self-proclaimed Caliph has died, his ideology lives on, which heightens Christians’ foreboding, believes Liddawi.

Many have already fled to Erbil, where the Kurds have given them safe haven. Some 50,000 others are said to be scattered across the plains of Nineveh, in towns and villages near Mosul, which until recently was occupied by Isis.

The street protests in Baghdad and Karbala, to the south, are deepening the sense of insecurity in the region. Hundreds have been killed in continuing protests over government corruption, high unemployment and the influence of Iran in the country.

There are now more than 6,000 Christian families in Jordan, who have been trying for years to get asylum in the West

Many Iraqis have been refugees several times over – driven out by the Gulf War, insurgency and Isis fighters. They’ve had enough, believes Liddawi. “For the last hundred years they have been under attack. They have lost hope. They have lost the desire to rebuild again.”

He says there are now more than 6,000 Christian families across the border in Jordan, who have been trying for years to get asylum in the West. “We encourage them to go back to Iraq but their homes have been burned down, there’s no water or electricity, there are no jobs and some of their villages still don’t have schools.”

Liddawi has been working with Release International in Iraq to help the Christian community support refugees, be they Christian, Muslim or Yazidi.

He does so with the blessing of the Kurdistan government. “They saw the impact of what we were doing and said we want you to do more. They have given us a huge open door to reach the refugees, and permission to distribute food and Christian books everywhere we go. They have even given us a thank-you letter. Please pray for our protection and the continuing favour of God to help the refugees and displaced people in the region.”

Andrew Boyd’s new book, ‘Neither Bomb Nor Bullet’ is published by Lion Hudson. It tells the inspiring story of Archbishop Benjamin Kwashi, whose wife was nearly killed by Boko Haram, and gives a heartfelt call to true discipleship. He is the General Secretary of GAFCON, the Global Anglican Future Conference. Read an extract here.