Our children are being blinded to the reality of evil 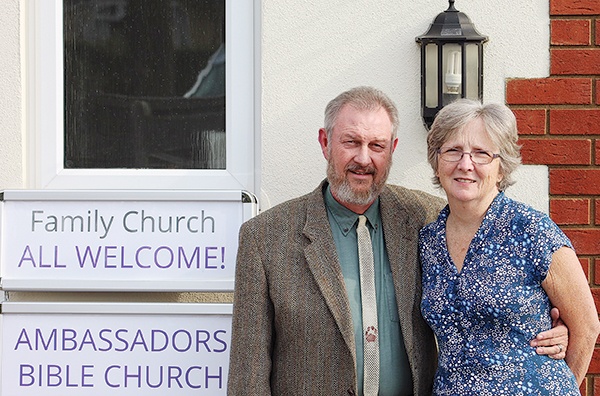 A FORMER CHILD MEDIUM WHO IS NOW A CHURCH PASTOR has warned that the occult has infiltrated popular culture so deeply that our young people are in danger of accepting witchcraft as normal.

Dr Greg Hibbins, who was dedicated to Satan as a baby and indoctrinated in the occult, miraculously became a Christian, then a special forces soldier, evangelist and church pastor. From his own
experience of abuse and then wrestling to escape demon possession, he knows the frightening reality of the occult world.

He warns those who might dabble in it this Halloween: “Satan wants to get you hooked.”

Dr Hibbins believes that the popular Harry Potter series is simply the modern equivalent of the occultic fiction which he was made to read as a boy. In this paper he explains how, as a 16-year-old, he resisted being taken over completely by the demonic and ultimately found his way to church, where he was completely set free.

He says, “That night I found Jesus Christ as my Lord and Saviour and became ‘born again’. I physically felt the weight of sin and the years of occultic oppression lift off me instantaneously.”

With this startling childhood, he speaks from first-hand experience when he claims that many fantasy films, games and books, particularly Harry Potter, are designed to inure our youth to witchcraft. He says, “Harry Potter is just the poster boy for many lesser but equally dangerous occult streams used by the media and entertainment industry.”

In recent years the popularity of Harry Potter has led to primary classrooms’ bookshelves being full of occultic fiction, with no spiritual safeguarding in place.

Glynis Sullivan, a former librarian for Leicestershire’s education service, told HEART, “When the first Harry Potter book was published, teachers, librarians and children were deceived into thinking it was the most exciting book, not realising the danger as the story was based on the occult. Many other books followed on the same theme, even non-fiction, encouraging children to devise their own spells and to think that witchcraft was harmless and fun.”

During her 11 years of selecting books for schools, Mrs Sullivan saw an enormous increase in the publication of children’s books based on the occult world: “People think books with ghosts and goblins will interest young readers, but many authors are basing their stories around actual witchcraft and pagan practices.”

Pastor Greg concurs: “Young people get inspired to cast real spells after reading Harry
Potter, because they see witchcraft as an easy way to get people to do what they want.”

He recognises the Harry Potter books as the modern-day equivalents of the fiction by Dennis Wheatley that formed part of his education in evil.

According to Dr Hibbins, the phenomenal success of Harry Potter is demonic in origin: “A huge amount of money has been poured into it, because Satan has people working for him in high positions of government and business. Younger workers who have already given allegiance to Satan are being fed into places of authority just like I would have been had I joined the South African Navy as a young occultist.”

Pastor Greg is also concerned about the “huge” panorama of occult activity prevalent in today’s entertainment industry: “Many of the demonic characters in horror movies, children’s books and computer games look exactly like the terrifying demonic beings that manifested themselves to me in my bedroom after my conversion to Christianity.”

He believes that Halloween has also played a large part in making people accept witchcraft. “Halloween is basically a holiday geared to Satan. Satan is trying to get people hooked in order to open spiritual doors and lure them deeper into witchcraft.

“Today he is propagating the belief that he does not exist because it makes people easier targets. But the enemy you don’t believe exists is the one who will kill you.

“My church in South Africa used to come under huge attack from occultists at Halloween because they knew my past. We had dogs slaughtered outside the church. Witchdoctors would come to our house in the dead of night to burn things and throw amulets, bundles of porcupine quills and feathers over our wall as part of their satanic ritual.”

Dr Hibbins, who was also subjected to Satanist Ritual Abuse (SRA) when growing up in the former Rhodesia, is able to say with authority that occultic children’s literature is dangerous, because at the very least it blurs the lines between spiritual good and evil in the reader’s mind.

Campaigner Wilfred Wong, who has highlighted cases of Satanist Ritual Abuse, such as the testimony of abuse survivor Vicky Ash who was interviewed in this paper (Oct/Nov 2017), told HEART: “All witchcraft, whether ‘black’ or ‘white’, is demonic in origin. Black witchcraft is satanism by another name. Satanism and Satanist Ritual Abuse are very extensive in the UK. It is growing very rapidly and there are satanists in many influential positions in our society including Parliament, social services, the judiciary, media and police. This is one reason why it is often so difficult for victims of SRA to obtain justice.

“Halloween is the major date on the satanist calendar and is one of the dates when satanists conduct animal and/or human sacrifice. Truly demonic evil exists at the heart of Halloween and at the heart of books that try to attract children to the occult. For more information and extensive evidence regarding SRA in the UK please follow this link to my website: www.casra.org.uk.”

Dr Hibbins, who has written a book about his fearsome past, can see how current culture is pointing the way to the fulfilment of biblical prophecy: “Satan has many different occult streams, but they all flow from the same cesspool. I don’t think people will even recognise the Antichrist when he manifests with his demons because they will be so desensitised.”

Many churches now put on ‘Light parties’ on 31 October or 1 November (‘All Saints Day’) to help their youngsters focus on the new life that Jesus offers. But with Halloween widely accepted, the battle goes far beyond the church doors. And when children’s school shelves are full of occultic fiction, is it surprising that one primary school girl told her pastor father that most of her classmates prefer Halloween to Christmas?

We hope that readers will understand the seriousness of this warning and be inspired to pray for our young people.