A holy war has broken out – and though the Jewish state is surely its epicentre, this war is not confined to Jerusalem or even Israel as a whole

As I started writing this, Israeli cities such as Tel Aviv and Ashdod were under a barrage of rocket fire and cities with a mixture of Jewish and Arab citizens are plagued by riots.

But Jerusalem’s battle over holy sites is symptomatic of a spiritual battle that is being replicated in UK classrooms.

At the heart of the conflict is Jerusalem

How did it all begin? Palestinians throwing rocks at police is not a new phenomenon during the ‘holy’ month of Ramadan. But there was a significant rise in tension this year, with PA (Palestinian Authority) leaders once again inciting further violence against Jewish ‘settlers’ and Gaza-based Hamas weighing in with their deadly missiles.1

At the heart of the conflict is Jerusalem, and it is inexorably building up to the climax foretold in Bible prophecy of a time when the city is attacked by an alliance of nations who subsequently come under God’s judgment when Jesus returns to usher in his kingdom (Joel 3:2, Zechariah 14:4).

For the God and Father of our Lord regards Jerusalem as his own – the “city of the Great King” and the “joy of the whole earth” (Psalm 48:2) – and all who try to move her (ie change her boundaries, divide her, or claim her as their own) will injure themselves (Zechariah 12:3).

The devil has always wanted Jerusalem as his own, in the same way he seeks to usurp God’s place in all our hearts. But he senses that his end is nigh and is striking out with all the fury of a snake that has been trodden on.

He certainly doesn’t like being reminded that East Jerusalem and Judea (the so-called ‘West Bank’), illegally annexed by Jordan in the independence war of 1948, were recovered in the Six Day War of 1967. This victory
reunited the city for the first time in nearly 2,000 years, giving Israel legitimate access to all the land from the Mediterranean to the Jordan River, in accordance with the San Remo treaty of 1920 and, indeed, the Bible (Genesis 17:8).

The Jewish people are not ‘settlers’ in Jerusalem, or anywhere in Israel, which is theirs both by right of international law and the Word of God

The Jewish people are not ‘settlers’ in Jerusalem, or anywhere in Israel, which is theirs both by right of international law and the Word of God.

The spiritual battle could even be seen in the protracted problem of leadership; after two years and a spate of general elections, Israel still has no majority government.

But the Lord watches over Israel, and will neither slumber nor sleep as he ensures ultimate protection for his chosen people, now gathered to their ancient land from the farthest corners of the globe, and soon to be welcomed into the loving arms of their Messiah.

Yes, the scene is being set for the climax of the ages – the return of Jesus, King of the Jews, which also explains the fearsome end-time battles for people’s minds – especially those of our children, in Great Britain, a gentile nation greatly used in spreading the Gospel of the Jewish Messiah.

Thus independent school chaplain Rev Dr Bernard Randall was sacked for refusing to kow-tow to LGBT ideology, after another staff member secretly reported him to the anti-terrorism Prevent programme. His crime? He had delivered a sermon defending the right of pupils to question the introduction of LGBT ideology to their Christian school. He had even been asked about this by a puzzled pupil.

Prevent was established to identify those at risk of radicalisation, and police duly advised the school – Trent College, near Nottingham – that he posed no such risk.

With the school having a ‘Christian ethos’, Dr Randall was appointed to provide pastoral care in 2015. But then the school began implementing Educate and Celebrate, a programme run by Dr Elly Barnes who, during a training session, urged teachers to chant “Smash heteronormativity” (the normalisation of attraction to the opposite sex).

Dr Randall, who pointed out that some of the programme’s beliefs were contrary to Christian values, is suing the school for discrimination, harassment, victimisation and unfair dismissal.

The saga – and his entire sermon – were spread over four pages of the Mail on Sunday, in addition to columnist Sarah Vine (wife of Cabinet Office Minister Michael Gove) devoting the majority of her page to the injustice faced by Dr Randall.2

Andrea Williams, CEO of the Christian Legal Centre, which is supporting Dr Randall, told the Mail on Sunday: “Who are the extremists in this story? The partisan agency which teaches young children that they can be born in the wrong body, or the school chaplain moderately presenting what the Christian Church has taught about marriage, sex and gender for the past 2,000 years?”

The foundations of what is left of our Christian society are being undermined at every level; and the battle is essentially over Gospel truth which incorporates God’s great plan for marriage.

The hordes of hell are gathering their forces against the Lord, both on the holy sites of Jerusalem and in the hearts and minds of pupils in our UK classrooms. Whose side are you on?

1 In a briefing arranged by the Israeli Embassy in London which drew over 300 participants, former IDF military spokesman Lt Col Peter Lerner said: “You cannot expect Israel not to protect itself because Hamas is hiding behind civilians. But we are doing everything we can to safeguard civilian life.” Anticipating criticism for taking retaliatory measures, he wondered what we would do if France began raining rockets on us. “I don’t think British people would pick up a white flag and surrender.”

The 30th anniversary of Operation Solomon, the dramatic airlift of Ethiopian Jews from Addis Ababa in the midst of a civil war, is being celebrated with the launch of further efforts to support this unique community in Israel, now numbering 160,000.

“The rescue of Ethiopian Jews is the first time that black Africans were brought out of oppression into freedom, not the opposite”

The return of Jews to their ancient land from the four corners of the world – a process known as Aliyah and a fulfilment of many Bible prophecies – is one of the great miracles of the modern era.

Several thousand Ethiopians are still waiting to make the historic journey, and much more still needs to be done to help assimilate those already in Israel, according to the Genesis 123 Foundation.

One bishop has commented: “The rescue of Ethiopian Jews is the first time that black Africans were brought out of oppression into freedom, not the opposite.”

The original 1991 airlift saw 15,000 rescued from the war-torn country within 36 hours as commercial and military planes shuttled back and forth, a phenomenon witnessed by Colchester-based Dr Fred Wright, who has been helping Jews around the world make Aliyah for several decades. In his book, ‘A Banner to the Nations’, Fred recalls the horror of landing in a war zone as his arrival in Addis coincided with a rebel coup.

The Black Lives Matter movement has been accused – by a black organisation – of using their platform to push an anti-Israel message.

Joshua Washington, director of the Institute for Black Solidarity with Israel, said: “BLM leaders are using the black community as a cudgel against Israel, garnering much personal wealth in the process.”

Jerusalem and Jaffa were rocked by a wave of anti-Semitic attacks and riots coinciding with the Muslim holy month of Ramadan (see main article).

Violent clashes became tied to TikTok Terror – a new phenomenon through which videos of Arabs abusing Jews were shared on social media. The violent street protests in Jaffa – the biblical port of Joppa, just south of Tel Aviv – were sparked by an unprovoked attack on a rabbi. At the same time a barrage of rocket fire from Gaza, led by terror group Hamas, further unsettled Israeli residents.

The Orthodox Jewish community of Jerusalem’s French Hill neighbourhood was apparently reeling from the news of a rabbi in their midst having been outed as a ‘Christian missionary’.

There were rumours and suspicions about him for some time, but it all came to a head when his 13-year-old daughter, who attends a Haredi (ultra-Orthodox) school, told a friend that Jesus still loves her. “This is apparently a much bigger problem than we’re aware of,” a spokesman is reported to have said.

London-based negotiators Hussein Agha and Ahmad Samih Khalidi argued that the wave of normalisation between Israel and Arab states had left the Palestinians marginalised. Stating their case in an issue of Foreign Affairs, they argued for a position short of a state.

That was before the latest attacks on Israel, leading to the customary UN condemnation of Israel’s defensive actions.

South Africa’s Chief Justice, Mogoeng Mogoeng, is refusing to apologise for loving Israel and standing up for his Christian values after being ordered to do so by the country’s Judicial Service Commission.

In appealing the order, he says he would prefer to lose his position than dishonour God. A self-confessed ‘Christian Zionist’, he added: “I cannot, as a Christian, do anything other than love and pray for Israel because I know hatred for Israel by me and my nation can only attract unprecedented curses upon us.”

Students at London’s City University have voted to reject the International Holocaust Remembrance Alliance definition of anti-Semitism – formally adopted by the UK government in 2016 – in a campus-wide referendum.

Anti-Semitism still thrives in British universities, but Education Secretary Gavin Williamson has warned they face funding cuts for failing to adopt the definition.

The German federal government is giving millions of euros each year to Palestinian non-governmental organisations without bothering to check whether they have ties to EU-listed terror groups. 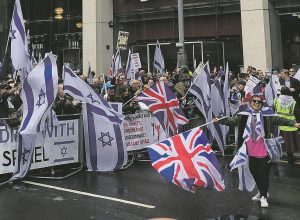 Around 1,500 enthusiastic Israel supporters gathered outside the Israeli embassy in Kensington on 23 May, holding placards supporting Israel’s right to self defence. 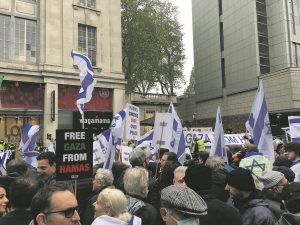 Israeli ambassador Tzipi Hotovely with MPs Christian Wakeford and Theresa Villiers addressed the rally, which was organised by the Zionist Federation. The event followed a 600 per cent increase in anti-Semitic incidents between 8 and 18 May, when Hamas fired over 4,000 rockets at Israel’s civilians. 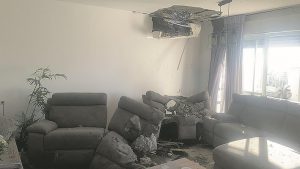 The home of Messianic pastor Javier Montenegro in the city of Beersheba in southern Israel was hit by one of Hamas’s Iranian rockets while he and his wife were sleeping in the flat’s shelter.

Ambassador Tzipi Hotovely is Israel’s latest envoy to the UK. Interviewed by Revelation TV’s Simon Barrett before May’s Hamas attacks started, she explained that the best way to campaign for Israel is on social media.

Appointed by Prime Minister Netanyahu, at 41 Tzipi Hotovely is young by ambassadorial standards. The daughter of immigrants from Georgia, she is also a married mother.

She spoke of Israel as a start-up nation and explained that they were longing to see tourists. Although Israel was requiring tourists to be vaccinated before the Gaza attacks began, it has since lifted its internal Green Pass scheme, which limited some everyday activities to those who had had Pfizer’s experimental Covid injection.

Mark Regev, Israel’s former ambassador to the UK, was one of several experts who gave briefings by Zoom during May on the conflict. He spoke of the inaccuracy of the reporting of the land disputes in East Jerusalem as a trigger to the recent attacks and gave the true causes as the desire to postpone Palestinian Authority elections, which angered Hamas. He said: “It was convenient for everyone to take it out on Israel.”

To receive reports on these briefings, including a brief history of the State of Israel, please email admin@heartpublications.co.uk or send £5 for p&p to the HEART office.