Life and death on the Nile 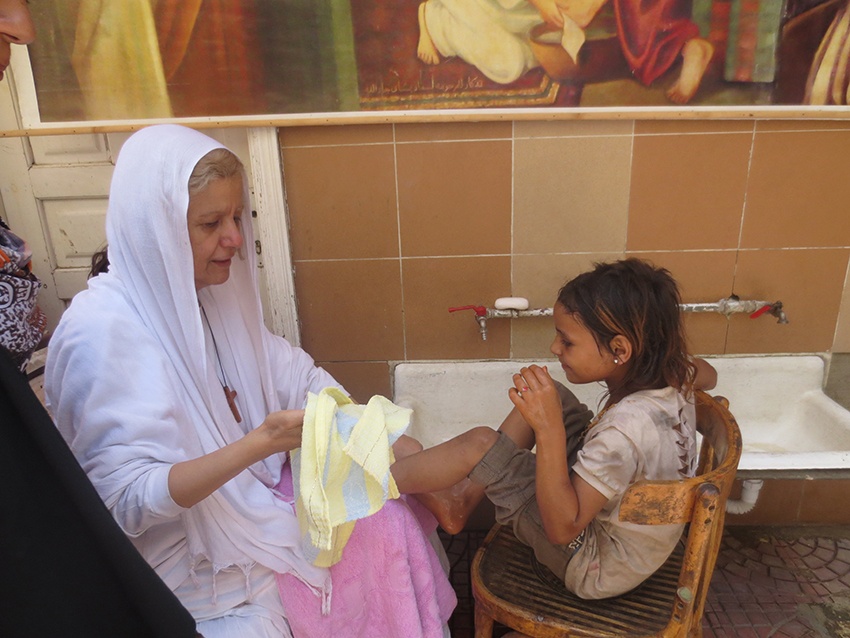 As Egypt’s Christians are targeted by Islamist extremists and rats bite off the ears of slum-dwelling Christian children, Wilfred Wong reports on this country that has long played a mysterious part in God’s purposes

Amid the darkness of persecution and poverty, God has raised up an amazing woman to serve Egypt’s forgotten Christians.

Dressed all in white, the angel-like figure of ‘Mama Maggie’ (as she is affectionately known) can often be seen washing the feet of the Christian children of Egypt’s slums.

Egyptian Christian Maggie Gobran grew up in an affluent family. After working in marketing she

became a distinguished professor of computer science at the American University in Cairo.

Her eyes were opened to the plight of other Christians living in squalor when she first visited Cairo’s notorious ‘zabala’ or garbage slums. About 80% of Egypt’s Christians live in poverty, on less than US $2 a day, according to Mama Maggie.

She was horrified: “How could babies be born somewhere without clean water?”

By 1989 she felt God calling her to give up her well-paid academic work to serve poor Christians. In 1989 she founded the ministry of Stephen’s Children, declaring that God told her that his call to work with the slum children was her “promotion”. She sold most of her possessions, including items of sentimental value, to help fund the work, which is still supported entirely by donations. 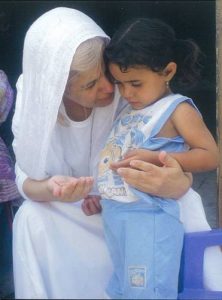 Often called the ‘Mother Teresa of Egypt’, Maggie has been nominated repeatedly for the Nobel Peace Prize.

On a visit to Egypt to help Stephen’s Children, I saw a Christian woman clutching her little baby and searching for items to sell for recycling. Next to her was a stack of bread that she had picked out from the garbage to eat.

There are huge rats amid the garbage that often scurry into the families’ little homes at night. One Stephen’s Children worker who saw Christian children with bits of their ear lobes missing was informed that the rats had bitten them off while they were sleeping.

Stephen’s Children offers these children access to education or vocational training so they can earn a good income when they grow up. It also provides medical and dental care, children’s camps, vocational training centres, literacy schools, kindergartens and orphanages and distributes food, blankets, scarves and shoes.

Each week ministry workers visit and spiritually mentor a child (this includes prayer,
Bible reading and Bible memorisation), helping to lead hundreds of thousands of nominally Christian children to Christ.

Mama Maggie is married and has a son and daughter of her own, but continues to lead a very simple life, spending most of her spare hours in prayer.

Addressing the Christian Global Leadership Summit in 2011, she said: “We don’t choose where to be born, but we do choose either to be sinners or saints—to be nobody or the heroes. If you want to be a hero, do what God wants you to do.”

To find out how you can help Egypt’s Christians, email Wilfred Wong at: wilfred.wong@btopenworld.com

Egypt was one of the first nations to widely follow the Christian faith. The apostle Mark is believed to have brought the Gospel to Egypt in the first century AD, possibly between AD 43 and 48 when he preached at Alexandria.

In biblical times, God has twice used Egypt to rescue his people from calamity; Egypt was a safe haven for the patriarchs of Israel, to save them from starvation (Genesis 42:1–47:12) and of course for baby Jesus (Matthew 2:13–21).

Abraham lived in Egypt for a time, Joseph was Pharaoh’s minister there and Moses “was trained in all the wisdom of the Egyptians” (Acts 7:22). After the return of Christ, Egypt will be greatly blessed by God (Isaiah 19:19–25).

Although they form the largest Christian community left in the Middle East, today’s Egyptian Christians face shootings and forced conversions to Islam at the hands of Muslim extremists.

It is the latest manifestation of Egypt’s long history of anti-Christian persecution, with the Egyptian Church proudly calling itself the Church of the Martyrs. The ancient Christian writer, Tertullian,
declared, “If the martyrs of the whole world were put on one arm of the balance and the martyrs of Egypt on the other, the balance would tilt in favour of the Egyptians.”

The Coptic Orthodox Church comprises about 90% of Egypt’s 12 million strong Christian community, and Protestants about 1% (including evangelicals and Pentecostals).

As Islamic State’s (Isis) power in Iraq and Syria has waned, it has grown in strength in Egypt and neighbouring Libya. Thus Egypt’s Christians are now targeted for extermination more than ever: