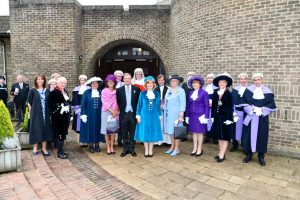 Dignitaries outside Worth Abbey after the Judges Service

DIGNITARIES in their Sunday best heard an unmistakeable Gospel message at a Judges Service. The annual event, usually a rather dry occasion, was given new life by West Sussex High Sheriff Davina Irwin Clark and her husband, Peter, a former rector, who now acts as the High Sheriff’s Chaplain.

Some 300 of the county’s leading figures assembled at the starkly beautiful Worth Abbey chapel in September to hear the Chief Constable, assuming the role of Moses, reading, “If your presence does not go with us, do not send us up from here,” before testimonies from  PC Deborah Akinlawon, former High Court Judge Sir Jeremy Cook, and Tom Mawer, a former prisoner now working for the churches in Chichester.

Everyone was told, “God’s verdict on each one of us is that we are guilty under his law — but he makes us innocent if we allow ourselves to be united with Jesus for eternity.”