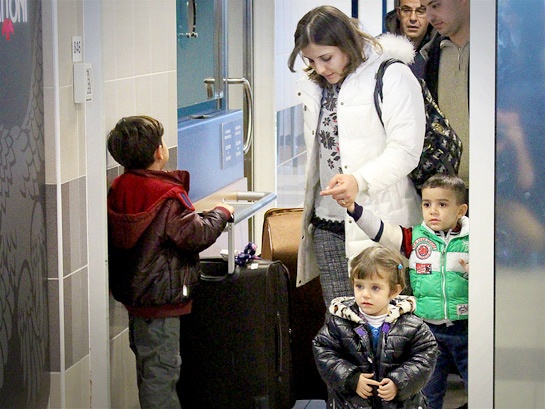 In moving scenes at Prague airport, the first of 37 families rescued from Iraq arrived in late January.

Majid Rashid, one of the first ten arrivals, expressed relief: “For Christians, life is very hard in Iraq, we could describe it like living hell.”

He declared: “For us living in Iraq means giving your life and accepting death moment after moment.”

Two Czech government officials, a member of the European Parliament and the waiting media welcomed the first Iraqi arrivals. Their escape was funded by British relief charity Barnabas Fund’s Operation Safe Havens project, which still hopes the UK government will also open its doors to Christian refugees from Iraq and Syria. Currently the UK government is only taking refugees from UN camps, whereas Christians are fleeing to temporary shelter in churches.

153 Iraqis are expected to arrive in four main groups over the next two months on refugee visas supplied especially by the government of the Czech Republic. Barnabas will also support their first year costs of resettlement in partnership with Czech charity, Foundation Generation 21.

Barnabas Fund’s Chief Executive, Hendrik Storm, travelled to Prague to welcome the newcomers and praised the Czech government and Czech partners for recognising the “desperate plight” facing Iraqi and Syrian Christians: “We pay tribute to the vision and bravery of the Czech government in recognising that Christians are uniquely targeted and abandoned by the international community.”

“From the very beginning we were telling the Czech government that we have a strong financial partner in Great Britain, Barnabas Fund. They had many questions about financing the project, so it was very helpful in the whole process of receiving agreement from the Czech government. Without you the project would not be possible.”

The late Lord Weidenfeld, who died this January aged 96, helped to fund and support Operation Safe Haven. Although he became famous as founder of the publishing house Weidenfeld and Nicolson, young Georg Weidenfeld had experienced being a refugee from Austria as a boy to escape the Nazis. Thanks to the care of a Plymouth Brethren family (not Quaker as reported in the last issue of this paper), who also helped his father to flee Austria, he wanted to help Christians as they had helped him. Interviewed by Revelation TV last November, Lord Weidenfeld recalled becoming close to the late Pope John Paul II who had told him, “The Jews are the elder brother of the Church.”