How revival, followed by ‘enlightenment’ caused Britain’s rise and fall

The Triumph of the Political Class

Tracing the demise of integrity in British public life, Peter Oborne shows that British politics – once the envy of the world – has become “rotten to the core.” His book was first published in 2008 and is still all too relevant as we head towards a General Election.

He argues that, particularly in the last 20 years, the “political class” has succeeded in sidelining, and virtually destroying, all remnants of the checks and balances so carefully set up by our Victorian forefathers that made our politicians accountable to the nation.

Perhaps most striking of all is his claim that our politicians are fast reverting to a situation similar to that which existed in England in the 18th century when, “public men sought office as a means of enriching themselves and rewarding their relations, clients and dependants.”

Oborne highlights how, towards the end of the 18th century, and throughout the 19th, our ancestors gradually established a series of dividing lines between private and public, and between party and state. “Transgression often led to personal disgrace or jail.”

He claims that this change was the work of a relatively small group of people: a group of classical scholars wanting to emulate classical Roman virtue, and evangelical Christian reformers guided to return the nation to the spiritual, social and moral tenets of the Bible. Thus:  “The Victorians had created something extremely unusual in the long history of political society: the idea of an unselfish public domain and an altruistic governing class.”

Why had God brought the 18th century revival to an undeserving nation?

By the end of the 18th century the Industrial Revolution and expansion of the British Empire through the British army and navy, together with Gospel proclamation, church building, overseas missionary endeavour and social reform  saw Britain change from a small backwater in Europe to become the major world power with a new sense of moral purpose.

It was certainly not because Britain deserved it! The simple explanation is that God had designed that, through Britain, he would initiate a new and powerful wave of missionary endeavour to ensure that all the earth should hear the Gospel of Jesus. And, from Britain, the aftershocks of the renewal reverberated all around the world.

Why is there today such a falling away from God’s Gospel and blessing?

However, “Enlightenment” thinking, born 100 years earlier, began to challenge the 19th century’s Christian consensus through the publication of Darwin’s ‘Origin of Species’ and the onslaught of Higher Criticism, the theological school that views biblical texts as having human rather than supernatural origins.

The double effect of undermining trust in the Bible, on the one hand, and proposing an alternative to the God of Creation on the other has, over many decades of persistent infiltration into our schools, our media, even our churches, materialised into the kind of  spiritual and moral relativism that we see today. This has now become the new consensus, in which we have left the God of the Bible out of our private and public life, It is not hard to recognise that, at the very heart of this change that has come over our nation, lies a deeply ingrained spirit of rebellion against Almighty God and all he purposes.

However, the same God who brought past revival to the nation can do so once again. Let us seek his face on behalf of the people! 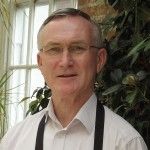 Ian Milmine grew up in Chile where his parents were SAMS missionaries; his father is retired Bishop Douglas Milmine. After completing his secondary education in Santiago, he went on to read History and Geography at the University of Chile, working on the development of natural resources for 6 years with a Chilean Government Department. Since then he has worked full time in various Christian ministries, coming back to the UK in 1990, where he served with The Hour of Revival radio ministry in Eastbourne for 25 years until his retirement last year. The Hour of Revival radio ministry was founded by Dr Eric Hutchings who worked with Billy Graham; as General Secretary Ian worked on establishing and building the radio ministry. Ian is married to Ruth; they have five sons and seven grandchildren.

New Archdeacon for Brighton and Lewes