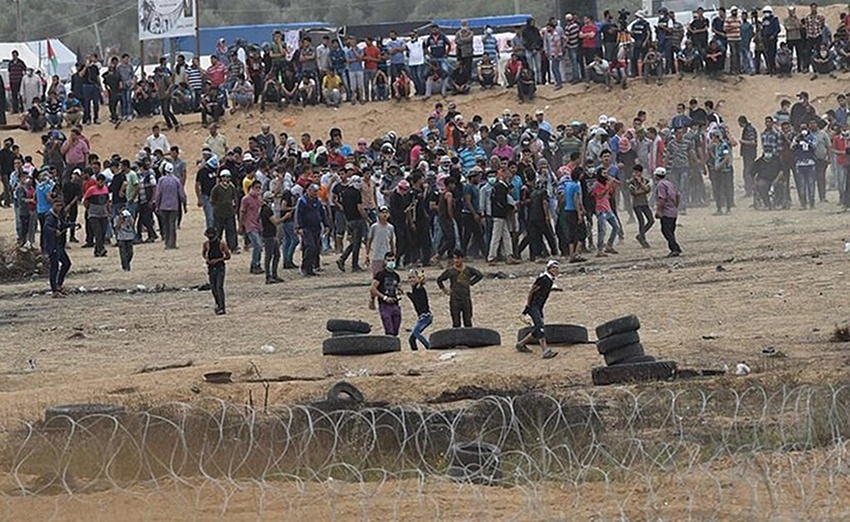 Gazans reveal: Hamas is pushing us to charge Israel’s border

Three Palestinians, who were arrested by the IDF in May after crossing the fence into Israeli territory, told the Shin Bet (Israel Security Agency) that Hamas terrorists in civilian clothes encourage children to try to cross the fence in order to steal IDF equipment. (United with Israel, 15 May 2018)

Former Israel Defence Forces’ South Commander Maj. Gen. Yoav Galant said the people in Gaza “are hostages of Hamas – 20,000 gangsters and terrorists are holding 2 million people as hostages – and this is the result,” referring to the dozens of deaths along the Israeli-Gaza border on 14 May. (JNS, 14 May 2018)

In an interview with Al Jazeera, Hamas co-founder Mahmoud al-Zahar called allegations that the terrorist group was employing “peaceful resistance” against Israel “a clear terminological deception.” (United with Israel, 16 May 2018)

US Ambassador to the UN Nikki Haley addressed the organisation’s Security Council on 15 May, defending President Donald Trump’s decision to move the US embassy to Jerusalem and calling out those who expect Israel not to defend itself. (United with Israel, 16 May 2018)

Australian Prime Minister Malcolm Turnbull told Melbourne Radio 3AW that the deaths were “tragic,” but that “Hamas’s conduct is confrontational. They’re seeking to provoke the Israeli Defence Forces.” (JNS, 15 May 2018)

Hamas’s press conference on 14 May said, “The mass popular movement and the marches are continuing and will continue… Our people’s marches have provoked the enemy to more bloodshed.” Hamas leader Yahaya Sinwar urged followers, “We will take down the border and tear out their hearts from their bodies”. (Christians United for Israel, 15 May 2018)

In a five-minute video entitled ‘Tel Aviv is Also a Land of Muslims,’ Al-Qaeda leader Ayman al-Zawahiri called on Muslims to carry out a jihad against the United States in response to America’s move of its embassy in Israel from Tel Aviv to Jerusalem. (JNS, 14 May 2018).  Meanwhile an Iranian student organisation offered a $100,000 bounty to whoever blew up Jerusalem’s new US embassy, according to Farsi-language reports. (The Washington Free Beacon.)