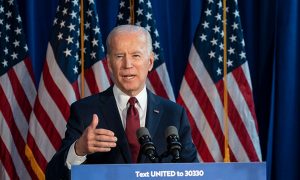 The Iranian Foreign Ministry said that Iran has prepared a list of demands for which Biden must “compensate” the Islamic Republic, Al Arabiya reported.

Meanwhile, Saudi Arabia was the last country to congratulate Mr Biden. Under President Trump, a close alliance against Iran’s extremism had been formed with the oil-rich kingdom.

The Palestinian Authority’s Culture Minister, Atef Abu Saif, has denied over 3,000 years of Jewish history in the land of Israel by saying: “There is no such thing as an Israeli.” He added that they are simply a group of settlers who arrived from all the world states.

Corbyn back after  anti-Semitism inquiry

Former Labour leader Jeremy Corbyn was swiftly suspended from the party he once led when he refused to accept the findings of an inquiry into anti-Semitism.

The investigation, by the UK’s human rights watchdog, found Labour guilty of “unlawful acts of discrimination and harassment” while Mr Corbyn’s office was accused of political interference in the complaints process.

Mr Corbyn said the scale of the problem was “dramatically overstated for political reasons by our opponents inside and outside the party, as well as by much of the media”.

But Sir Keir Starmer, his successor, insisted: “If there are still those who think there is no problem with anti-Semitism in the Labour Party…you are part of the problem too.”

Following a disciplinary hearing, Sir Keir Starmer readmitted Mr Corbyn to the party, but denied him the Labour whip, provoking a furious response from Mr Corbyn’s supporters, who include Unite union leader Len McCluskey. Unite is a major donor to Labour.

Meanwhile The Guardian newspaper has been accused of anti-Semitism for publishing a cartoon of Sir Keir carrying Mr Corbyn’s decapitated head on a golden plate.

The problem goes back to Labour’s candidate selection, according to a Talkradio caller in November. He explained that prospective  Labour councillors or MPs used to demonstrate that they had spent time at an Israeli kibbutz as proof of their enthusiasm for a communal lifestyle.

These days they need to show that they have spent time in a Palestinian refugee camp.

Mass protest over criticism of Islam

Some 12,000 Muslims took part in a mass protest on Jerusalem’s Temple Mount after French President Emmanuel Macron said Islam was “in crisis all over the world” and it was time for reform.

BBC forced to back down

The BBC has been forced to apologise and drop a planned documentary for its Arabic TV service allegedly promoting sympathy for convicted Hamas terrorist Ahlam Tamimi, mastermind behind the 2001 Sbarro pizzeria suicide bombing in Jerusalem that claimed 16 lives. This follows a campaign led by the father of 15-year-old Malki Roth, one of the victims.

Malawi has followed the lead of President Trump and others by announcing that it is opening a new embassy in Jerusalem, thus recognising the city as Israel’s ancient capital. The African nation’s president is a born-again Christian who called the nation to prayer and repentance over coronavirus.

Other recent articles by Charles Gardner, which can be found at www.heartpublications.co.uk, include:

Charles is also now editor-in-chief of ‘Prophecy Today’ at www.prophecytoday.uk as well as a regular contributor to Israel Today at www.israeltoday.co.il

His new book, ‘King of the Jews’, is available from Christian Publications International,  Eden Books, or HEART Publications (tel: 01903 209383).

He is also author of ‘A Nation Reborn’ (CPI), ‘Israel the Chosen’ and ‘Peace in Jerusalem’ (olivepresspublisher.com & Eden) – all available from Amazon.

US charity The Genesis 123 Foundation is organising an international prayer event for Israel to celebrate Hanukkah in December. Christians and Jews all over the world will be invited to pray together.

Hanukkah remembers the re-dedication of the Temple and associated miracles. John 10:22-23 records that it was celebrated by Jesus himself. The prayers will be held in countries all over the world, in a variety of languages, and will be streamed on the charity’s Facebook and YouTube pages.

“Each segment will incorporate both live and recorded prayer and worship, as well as Jewish teaching,” said Jonathan Feldstein, an Orthodox Jew who is president of Genesis 123 and lives in Israel. “Because of the miracles related to Hanukkah, prayers will focus on miracles relating to Israel.

“People can also send their prayers for Israel, for themselves, and for their loved ones, which will be placed in Jerusalem’s Western Wall.”

Some of the leaders who took part in last year’s Global Chanukah prayer event were:

The winter festival that Jesus DID celebrate

Under occupation by a hostile foreign power, God’s ancient people learned to survive and preserve their heritage, even when it was illegal to do so. As a result, they saw miracles

Like Christmas, Hanukkah is not a biblical festival. It dates from the period between the Old and New Testaments. In the Bible it is mentioned in John 10, where we read that Jesus celebrated the Feast of Dedication (‘Hanukkah’ in Hebrew) referring to the rededication of the Temple in Jerusalem after its desecration.

He outlawed Jewish practice and massacred Jews who refused to obey

About 200 BC, Syrian king Antiochus Epiphanes ruled in Judea (modern-day Israel). He outlawed Jewish practice, massacring Jews who refused to obey. He looted the Temple in Jerusalem, sacrificed pigs on the altar and ordered an altar to Zeus to be erected in the Temple, which the Prophet Daniel had foretold as the “abomination that causes desolation” (Daniel 9:27).

By a miracle it stayed alight for eight days

In 164 BC, Jewish resistance led by Judah Maccabee reclaimed the Temple. However, priestly service could not resume until it was cleansed and rededicated to God. One small jar of uncontaminated oil remained, only enough to last for one day. They lit the menorah, the huge seven-branched golden Temple candelabra, and by a miracle it stayed alight for eight days until a new supply of purified oil was ready.

Commemorating this miracle, Jewish people celebrate the Festival of Hanukkah every year for eight days. Each day, using a special candelabra with nine stems, they light the prominent shamash or servant candle and use it to light the others: one candle on the first day, two on the second and so on.

Each day, new souls all over the world are lit up by the transforming light of Jesus the Messiah

At Christmas we often read John 1, which says, “the true light that gives light to every man was coming into the world”. Jesus is that light, the servant flame, laying down his life and lighting the lives of those who approach him humbly in repentance and faith.

Each day, new souls all over the world are lit up by the transforming light of Jesus the Messiah, just as each night of Hanukkah one more candle is set aflame. Once we have been set alight we must guard that flame, turning to Jesus daily so that our lives are sustained by the blaze of his Spirit.

The toy whose letters point to Messiah

Games are often played during Hanukkah, including spinning the ‘dreidel’, a four-sided spinning top. There is a Hebrew letter on each of the dreidel’s four sides – un Gimmel Hey Shin – standing for the phrase: “Nes gadol hayah sham,” meaning “A great miracle happened there”, referring to the miracle of the oil in Jerusalem.

It used to be thought that the dreidel dates back to the Maccabean revolt when Bible study was outlawed and Jewish children studied  in secret. If enemy soldiers came calling, pupils would put away their scrolls and pull out their spinning tops.

In fact, the dreidel is more likely to relate to life in the diaspora.

Amazingly, though, the numerical value of the dreidel’s Hebrew letters adds up to that of the Messiah.