Britain’s change of heart over their Israel policy is a welcome answer to prayer, and goes some way towards making  amends for their shameful betrayal when voting for January’s UN resolution aimed at delegitimising the Jewish state.

But their refusal to sign the Paris ‘peace conference’ communiqué is nevertheless a contradiction, reflecting the moral confusion of a government no longer recognising right from wrong.

“There are risks,” the UK government warned, “that this conference hardens positions at a time when we need to be encouraging the conditions for peace.”1

Thankfully, the Paris meeting merely re-stated the oft-repeated position of most nations, calling on Israel and the Palestinians to renew their commitment to a ‘two-state solution’, whereas it was expected to try to impose a settlement on the protagonists. This was despite their absence from the proceedings, derided by Israeli PM Benjamin Netanyahu as “futile” and described by Israeli Foreign Ministry spokesman Emanuel Nahshon as “flat as a failed soufflé”.2

Indeed, much hard-earned taxpayers’ money will have funded a luxury weekend jaunt for diplomats from the 70 participating countries just to read a script.

However, the expense could in one sense be justified as the conference mobilised Christians in prayer and action, according to the European Coalition for Israel’s (ECI) Founding Director Tomas Sandell.

“The Paris peace conference has helped to galvanise grassroots support for Israel around the world”, said Mr Sandell in a statement in Stockholm on the Tuesday morning after the conference, where he was to speak in the national parliament. Sweden currently holds the rotating chair of the UN Security Council.

An ECI briefing to supporters said it had been raising awareness through an active social media campaign for weeks. On the previous Sunday many Christians travelled to Paris to show their support for Israel while many more hosted prayer vigils in churches and organised rallies around the world.

In the conference conclusions, the participants (except for the UK and Australia) confirmed their support for a two-state solution with a call to the two parties directly involved in the peace process to dismiss any government representatives who do not share this goal. But the text of the final conclusions was softened after pressure from the outgoing US administration; criticism of Israeli settlements was balanced by the inclusion of a statement of the need to stop (Palestinian) terrorism and incitement.

A hundred years ago, when Britain pledged their support for Jewish repatriation in their ancient homeland through the Balfour Declaration, many of the Cabinet looked to the Bible for guidance. They were, after all, evangelical Christians.

Now most of our politicians choose instead to consult the Politically-Correct Dictionary. On this occasion, however, they have changed their tune which many believers put down to divine intervention in the form of answered prayer.

Tragically, the same government we expect to honour Israel (for biblical reasons as much as anything else) and do right by other nations passes laws approving wholly inappropriate behaviour between members of the same sex and then disapproves of those, like Christians, who refuse to hold that view because it is plainly wrong and against the teachings of the Bible.

Dame Louise Casey, for example, in addressing a parliamentary committee on the findings of the Trojan Horse scandal (exposing radicalisation within certain Muslim schools), suggested that Christian schools may also be targeted for their teaching of biblical views on sexuality.

She said the issues raised by Trojan Horse were “not okay, in the same way that it is not okay for Catholic schools to be homophobic and anti-gay marriage.”3

Equally absurd at a time when the National Health Service has been in the headlines for being in a state of virtual collapse amid huge demands in the face of lack of staff, facilities and finance, we hear of a completely unnecessary operation they are funding at a cost of around £29,000.

A 20-year-old woman who has been living as a man has become the UK’s first ‘transgender’ individual to become pregnant. She has been taking male hormones, but decided to postpone surgery to have her breasts and ovaries removed so that she could give birth, and duly became pregnant after finding a sperm donor through a Facebook group.4

What incredibly warped, upside-down, thinking drives our leaders these days? But this is what the Bible says: “Woe to those who call evil good and good evil, who put darkness for light and light for darkness, who put bitter for sweet and sweet for bitter” (Isaiah 5:20).

It’s time to awake from our spiritual slumber. 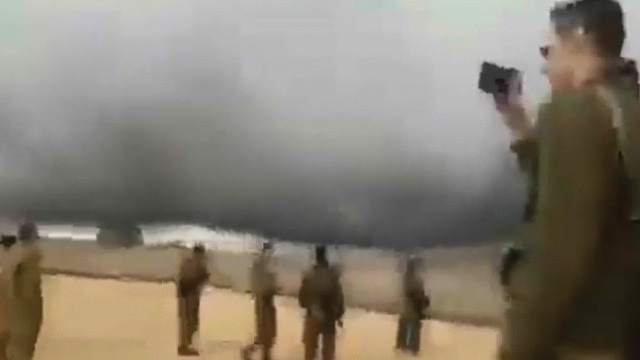 Israeli soldiers defending their northern border witnessed divine protection in the form of a literal ‘pillar of cloud’ akin to that experienced by their ancestors in the wilderness.

Amidst increasing ISIS activity on the Golan Heights recently, a bizarre storm of dust, cloud and rain completely engulfed the Syrian side of the border, but stopped at the boundary with Israel, acting as a barrier from their enemies.

A similar intervention marked the battle for the Golan Heights during the 1973 Yom Kippur War when Israeli tanks were outnumbered almost ten to one. At one point, IDF soldiers were trapped within a massive minefield. Then, through the night, a violent wind caused them all to crouch down with their faces to the ground. And when it stopped, a bright moon enabled the Israelis to see that the wind had exposed all the mines, allowing the soldiers to walk straight through unhindered. (Israel Today & CFI’s David Soakell)

The settlements are not the problem

In the week before Christmas (and Chanukkah, which joyfully coincided last year), the UN passed a resolution declaring that Israel is illegally ‘occupying’ much of the land to which it is historically, and biblically, entitled – including the Temple Mount, Western Wall and the Old City itself (every inch of east Jerusalem, in fact) which has been part of Judaism for thousands of years. And Britain, to its shame, voted for this! Palestinian spokesmen have been quoted over and again saying that they only want such a state as a launch pad for ridding the region of Jews altogether.5

After the truck-ramming attack in Jerusalem which killed four Israeli Defence Force soldiers,2Arab Palestinians took to the streets and social media to celebrate and, in Gaza, the ruling Hamas terrorist group praised the attack as a “natural response to the Israeli occupier’s crimes”.

According to the PA, the murder of Israeli youths is sanctioned by Islam and the Authority will now reward the terrorist’s wife with a lifetime monthly allowance of £627 ($760 or 2,900 shekels). And this in a territory led by Mahmoud Abbas – a so-called ‘moderate’. No, the problem is not the settlements, or Jewish communities, built on disputed land claimed by the Palestinians. The root of this enduring conﬂict is antiSemitism, currently in the shape of Islamic fundamentalism.

Actually, Israel is entitled under international law to Judea and Samaria (currently known as the West Bank) courtesy of the San Remo Conference of 1922 in the aftermath of World War I. In fact it was around this time that a ‘two-state solution’ was frst tried when, with the stroke of a pen, the British Government handed over a major portion of the territory originally earmarked for Israel to the Arabs – the country now known as Jordan. So why is there a need for further division?

Jewish students were left “in a state of distress” after Manchester University’s Student Union voted to support the Boycott, Divestment and Sanctions movement.

Joe Glyn-Davies said: “My Judaism, and my relationship with Israel, is the single greatest element of my identity… Now I am made to feel ashamed of my Zionism, and I can’t possibly grow in an arena that espouses vitriolic abuse and shuts down debate.” (Jewish News)

Iran has opened an ‘amusement park’ teaching kids to fight America and Israel. Children wear military uniforms as they simulate fighting enemies of the Islamic Revolution with plastic missiles and bullets.
(United with Israel & MEMRI)

A growing number of British children are being radicalised by neo-Nazi ideology, stoking fears that a new ‘Hitler Youth’ is on the rise, the Daily Mirror reported. And students at ten Italian high schools included Adolf Hitler’s Mein Kampf in lists of their top ten favourite books, media sources reported. (Algemeiner)

Russia and Iran are in talks over an arms deal worth $10 million. But against that, persecuted Iranian Christians are now part of the fastest growing church in the world. (Saltshakers)

Arab social media responded with incendiary remarks about Israel as the Jewish state was ablaze with a series of devastating fires, many of them ignited by arsonists.

Send your comments to letters@heartpublications.co.uk