It can be clearly seen by the way we behave

The TBN channel1 treated us recently to a showing of the film Faith Like Potatoes, the wonderfully inspiring testimony of South African farmer-evangelist Angus Buchan.

We’ve seen it several times, but the faith of this man is worth examining again. For as a Brazilian Jewish friend emphasized the very next day, the Hebrew understanding of faith is of something you exercise or train like going to the gym to build up your bodily strength.

It is not an intellectual assent of a belief system. It is about trusting God for any and everything, flexing and stretching and building up muscles until they are capable of believing him for miracles. When you see answers for ‘little’ prayers, it gives you the boldness to pray for bigger things.

After all, you don’t run a marathon without training. You build up your strength gradually, little by little, mile by mile. Angus learnt to trust God that way, even to planting potatoes in a drought, taking his cue from the book of Ecclesiastes: “Whoever watches the wind will not plant; whoever looks at the clouds will not reap.” (Eccles 11.4) 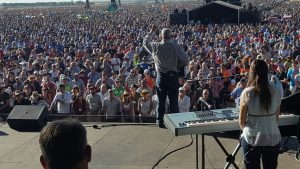 His first mission was to Ladysmith, my home town, where not many turned up to hear him – one wag declaring it to have been ‘over-evangelized’! But he was not put off; he knew God had called him, and was soon filling stadiums urging Christians to pray for an end to drought and bloodshed.

Later he hosted up to 400,000 men on his farm, challenging them to godly leadership within their families. Soon these so-called Mighty Men’s Conferences spread nationwide. And today he continues to win souls for Jesus while also influencing national leaders.

And it all began in a little Methodist church, where he committed his life to Christ at an evangelistic outreach 40 years ago. Tragically, the Methodist denomination has since lost it soul, having sold out to worldly agendas both in opposition to Israel and in support of same-sex ‘marriage’ in flagrant defiance of God’s unchanging word.

It was because they refused to compromise that first century Christians were thrown into arenas to be torn apart by wild animals – their lifestyle condemned the culture of the day.

More tragically still, the perverse hedonism of Roman society described by the Apostle Paul (see Romans 1) has not only swept across the Western world like a flood, but has even taken root in the very nation called to be “a light to the Gentiles” (Isa 49.6).

Tel Aviv has become a hotbed for homosexual activity and ‘Gay Pride’ parades have even invaded Jerusalem, the city God calls his home (Psalm 48.1-3) and where a sizeable proportion of the population are openly religious.

In an extraordinary move, PM Netanyahu has recently appointed Amir Ohana as Justice Minister, the first openly gay senior minister in Israel’s history! The speed with which the gay rights movement has swept all before it is very significant, and poses questions about the nearness of our Lord’s return.

In the Book of Revelation, which graphically describes the great upheavals that will usher in the Second Coming, Jerusalem is referred to as ‘Sodom and Egypt’ (Rev 11.8). And the prophet Daniel, speaking of the false Messiah (or Anti-Christ) who will make his appearance at this time, suggests that he may well be ‘gay’: “Neither shall he regard the God of his fathers, nor the desire of women, nor regard any god; for he shall magnify himself above all.” (Dan 11.37, King James Version)

At the end of the day, the devil is after our souls. This is what the king of Sodom wanted from Abraham (when still called Abram), saying: “Give me the people and keep the goods for yourself.” (Gen 14.21) But Abram replied: “I have raised my hand to the Lord…and have taken an oath that I will accept nothing belonging to you…” (Gen 14.22f)

The world, the flesh and the devil is after our souls, but Jesus asked: “What good is it for a man to gain the whole world, yet forfeit his soul?” (Mark 8.36)

As my Brazilian friend, Ariel Keren-Or, put it: “Faith is visible,” by which he meant that you can see it by what it produces. The result of regular gym workouts is very evident in the physical body. In the same way, a man who has faith in Jesus doesn’t keep it a secret! It spills out of his every pore as he lives out his passion for the Lord.

As Jesus goes on to say in the passage quoted above from Mark’s gospel: “If anyone is ashamed of me and my words in this adulterous and sinful generation, the Son of Man will be ashamed of him when he comes in his Father’s glory with the holy angels.” (Mark 8.38)

Asia Bibi stands up for other ‘blasphemy’ victims