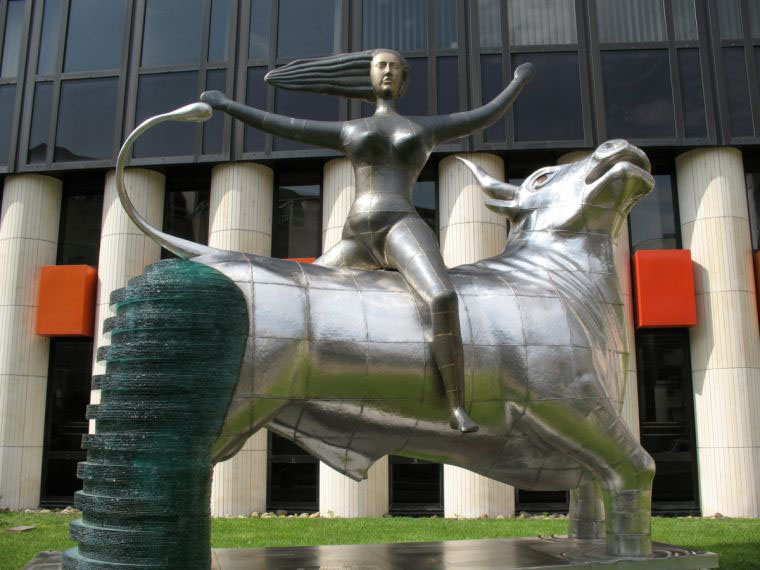 The statue of Europa astride a bull in front of the EU Parliament in Strasbourg. Some Christians associate this EU symbol with the “woman sitting on a scarlet beast” in Revelation 17

A poll by Lord Ashcroft shows that the percentage of Christians who voted to leave the European Union was higher than in the country as a whole.

Nearly 60 per cent of respondents who identified themselves as Christians voted for Brexit, compared with the 52 per cent national result.

Many of the ‘Christians’ in the poll may have been nominal rather than committed, and the result might have as much to do with their ethnicity and age as their faith, but suspicion of the EU was promoted among Christians at the grassroots level.

The Anglican Church’s two most senior Archbishops and many other church leaders were in favour of Remain, and most evangelical organisations remained neutral, but a large number of Christian blogs, websites and prophetic groups cited biblical arguments against membership of the EU.

The influential Ellel Ministries said that Christians should vote to leave “for deeply spiritual reasons”.

Evangelist David Hathaway cited biblical prophecy in his ‘The Rape of Europe’ video which was produced long before the referendum, but reviewed in the April-May issue of this paper and also given prominence on Revelation TV. The video now has over 95,000 views on You Tube.

Intercessors for Britain produced a booklet that stated: “What we see in the EU has striking similarities to what was trying to be achieved at the Tower of Babel”. The EU building in Strasbourg is based upon Pieter Bruegel’s painting of Tower of Babel and the EU once promoted itself with the slogan: “Many tongues, one voice”.

The Prophecy Today UK website said: “It is our firm conviction that a vote ‘Leave’ is the right way forward for Britain, before God.” Also supporting Leave were the Protestant Truth Society, and Catholic former government minister Ann Widdecombe led the pro-Brexit campaign group Christians for Britain.

Whether interpretations of Bible prophecy had much to do with the outcome is hard to say. It may simply be that Christians felt that to be increasingly governed by a secularised EU was a more dangerous future than leaving. As Ann Widdecombe told Christian Today: “We are certainly not self-governing for as long as we are in Europe.”