Christian leader in India run over by motorcycles

Violence against Christians in India hit a new level when Hindu extremists ran their motorcycles over a key evangelical leader after beating him.

Armed with bamboo rods and a thick metal chain with a heavy lock on it, the ten Hindu nationalists in Sehore, Madhya Pradesh state beat Isaac Paulose, 48, and then ran their five motorcycles over him, fracturing one of his ribs, said Uttar Kumar Deep, pastor of Grace Fellowship Church of CEA (Christian Evangelistic Assemblies), Sehore. 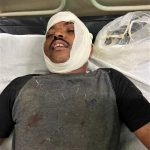 Isaac, an elder at the church and coordinator of the New India Evangelistic Association for Madhya Pradesh, was attacked shortly after dropping his 5-year-old son off at school on 3 March. His wife, Elizabeth, said he was just 300 metres from their home. Pastor Deep said that the men “scorned and taunted him, asking him to call on the name of Jesus”. They also threatened to kill him if he continued to convert people.

Isaac has had surgery to his left hand, which was also fractured, and stitches to his head.

Hemant Lal, a Christian leader from Bhopal, told Morning Star News: “I was amazed at his faith. He told me he was not scared… but that he was glad that he suffered for the name of Jesus.”

Hindu extremists routinely attack Christians for “conversion” despite the practice being legal in India.

Murdered for using water from a well