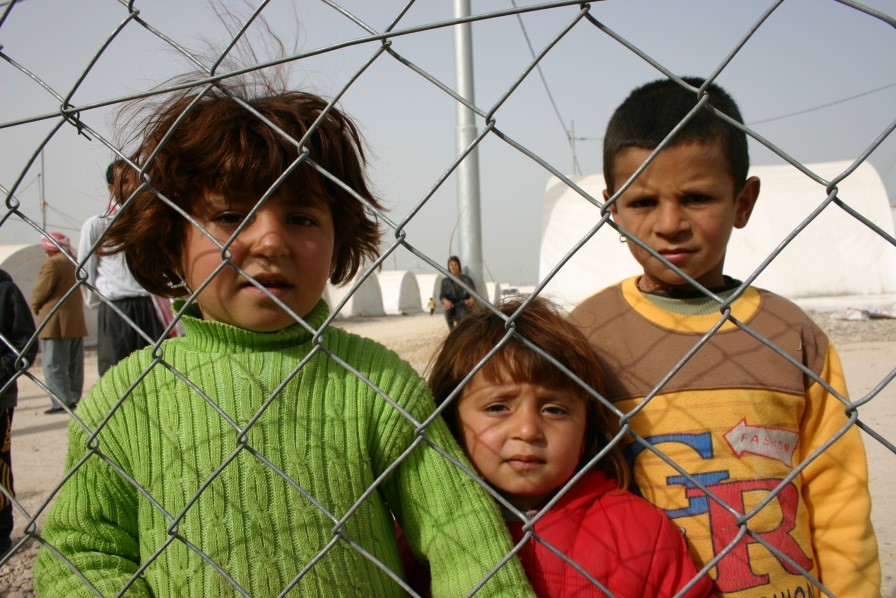 The shocking figure of those who froze to death in refugee camps – an estimated 6,000 according to the regional governor – were revealed to HEART by a Kurdish-born Danish doctor working with the thousands of homeless Christians, Yezidis and Muslims in Iraqi Kurdistan.

Speaking exclusively to HEART via a Sussex charity contact, Dr Mariwen Baker said he is using his own money to arrange shipment of vital medicines and vitamins for the survivors, who are now suffering from a lack of clean water, food/milk, medical drugs and electricity in the extreme summer heat of up to 48 degrees Celsius. And the next biting winter weather is just a few months away.

The horrors the families endured was related by their children to Dr Baker and ‘David’, an aid worker who visited the camps in Duhok, Kurdistan with relief supplies collected by Christian and Jewish charities.

Those who did not see their parents murdered for being Christian, Yezidi or Shi’a Muslim, still lost family members after they fled their homes to hastily erected tents. Winter came they were still there and while some men survived, thousands froze to death – mainly women and children who were less hardy.

In Kurdistan there are approximately 1.8 million refugees distributed over three provinces; Erbil, Duhok and Sulaimaniyah. There are 0.8 million of them in Duhok alone (where the population before their arrival was less than 1.2 million). Regional government and local relief agencies are fully stretched in trying to cope with this huge increase despite their limited budget, because earlier in 2015 the Iraqi government cut funding to the Kurdish government.

David, a Polish aid worker representing Jewish and Christian charities, including the Sussex-based Shekinah Legacy run by retired businessman Nevill Smith, spent a week in Duhok to help distribute humanitarian aid collected from companies and communities in the UK and Europe. He delivered new clothing, medical drugs and equipments, nappies, toiletries, boots and shoes for all ages.

It has been known for over a year that these refugees – Christians and Muslims from Syria and Southern Iraq, Yezidis from Sinjar in Iraqi Kurdistan – have lost everything after being driven from their homes, but actually meeting them and hearing their stories reduced aid workers with 30 years’ experience to tears. As Dr Baker explained, “Possessions, livelihoods, their loved ones and their dignity are all lost. They have also lost hope. They have fled for their lives. Parents, sons and daughters, cousins and uncles and aunties have been victims of IS attacks – and many themselves have been victims of the atrocities. Family members are missing. Children are disappearing in large numbers. The stories were unbelievable.”

Dr Baker translated for David, who introduced himself to the refugees as a Jew from Poland; his family were victims of the holocaust 70 years ago and the stories he heard were horribly familiar.

Small children wept and told David how they’d witnessed their parents and family members being killed – deplorable violence and decapitations. They trembled and cried and told of the violence they’d somehow escaped. Protected behind barbed-wire to keep them safe, David was chilled by the sight of them as pictures of the holocaust flashed through his head. Hitler had given people numbers. Each of these children had a name.

David declared himself impressed by how the Kurdish people are helping all the refugees in their own region; Christians, Muslims and even some Jews already live side by side in Kurdistan. David promised to tell the story and publicise the plight and despair of these people, all victims of circumstance. On the subject of publicity, David was further shocked when the refugees became visibly nervous of IS repercussions if their photos were publicised. Permission has been given on-site to publish the pictures within this article.

David discussed with the refugees’ representatives and local authorities how the West could help and send more goods before the bitter winter 2015. Mariwen Baker is already negotiating with Scandinavian governments to donate winter clothing and medicines. Dr Baker said, “We need warm clothing for them – boots, shoes and socks, bedding and medical drugs. Then we urgently need funds to get the goods to them. Please contact us immediately to let us know if you and your community or company can help us.”

Needs: Warm clothing – boots, shoes and socks, bedding and medical drugs. Funds to get the goods to them – this is urgent

TO DONATE OR SUPPORT

Our Associated Charities are:

Networking together with you we can make a massive difference for these poor desperate people.

Why are Britain’s doors closed?

THE BRITISH GOVERNMENT HAS SO FAR REFUSED TO OPEN ITS DOORS TO FLEEING CHRISTIANS ESCAPING THE MIDDLE EAST BLOODBATH.

Barnabas Fund, one of the main organisations working to help the persecuted Church, has launched a petition for voters to ask the Government to help. It can be signed at https://barnabasfund.org/save-the-christians-petition

It has launched Operation Safe Haven to provide refuge abroad for Christians and the first results were seen this July when 47 Christian families arrived safely in Poland after being smuggled out of Syria via Beirut. Yet so far the British government has not made any special arrangements for them. A spokesman told HEART, “We have been trying for the best part of a year to get visas for these Christians, yet the British government has been singularly unhelpful.”

The petition calls on governments to work with Middle East countries and “recognise that Christians are especially targeted and uniquely in need of safe refuge”. It points out that the Christian communities in Syria and in Iraq are among the oldest in the world but face a threat similar to the Armenian and Assyrian genocides of history. It adds: “They are being killed, enslaved and persecuted by so-called Islamic State and are forced to flee from their homes. Their homes are being destroyed and they have no safe areas in the region.”

The first signatories to the petition include Lord Carey, former Archbishop of Canterbury, Dr Patrick Sookhdeo, International Director of the Barnabas Fund and Canon Andrew White, the former Vicar of Baghdad.

Dr Patrick Sookhdeo said, “With the rise of Islamic State we are seeing what looks set to become a ‘genocide’ of Christians in the Middle East, yet the UK has its doors firmly closed. So many British Christians have been in contact with us to tell us that they have a spare room or even a second home in which they want to welcome Syrian and Iraqi Christians. Yet our government seems determined to turn its back on some of the most vulnerable people in the world.”

Background to the refugee crisis in Iraqi Kurdistan

When the instability came over Syria, over 250 000 refugees fled to Kurdistan in the beginning of 2014. When the IS attached Mosul, second largest city in Iraq, in June 2014 most of the Christians and Shia Muslims fled to Kurdistan, the safest region in entire Iraq since 2013 (since second Gulf War). Number of the refugees increased when ISattacked Kurdistan in August 2014, especially when they captures Sinjar, where Kurdish Yazidi live. Yazidi is a religion as Christian and Muslims. ISIS captured the city of Sinjar (still under the IS control), but never reached Duhok, or Erbil. Erbil is the capital of Kurdistan. They captures thousands of families, killed their men, and took their women. Still over 5,000 Yazidis, mostly young girls, are missing.

David and I saw two of them just escaped/rescued from IS. Their stories were horrible, which I will not relate. In short, the number of the refugees in Kurdistan increased to approximately 1.8 million, most of them in Duhok. In Duhok there are 23 camps. Yazidi kurds, besides Christians and Muslims, are distibuted among most of the camps. I was in Kurdistan, with delegate from a Norwegian Charity organisation “Visjon Norge Nødjelp AS” in March 20015, when three of our aid loads, containing clothes and medical equipments, arrived in Duhok. We visited the General Director of Health in Duhok, and his department facilitated transport for us.

In June I was with David in Kurdistan to distribute two more loads with clothes, and deliver medical drugs. During our visit, we met Duhok’s Governorate and General Director of Health. They informed us that thousands of children and women, all over those 23 camps, lost their lives during last winter due to the lack of warm clothes. While we were visiting the camps, the temperature was reaching 44 degrees Celsius, and in July was up to 48 degrees.  One of the camps we visited, KABARTO, had approximately 6 000 families. Let me write some facts about these camps.

The list is LONG, but let me stop here.

Just one more thing, there is a plan of recapturing the city of Mosul (now with 1.5 million population, but before IS attacked it had over 2 million). The city of Duhok fears that another 0.5 million refugees might seek help in Duhok province. Mosul is close to Duhok, with a distance less than 80km.