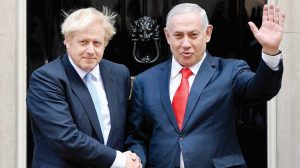 Boris and Benjamin Netanyahu on steps of no 10

With both leaders facing the imminent prospect of elections, Israeli PM Netanyahu met with Boris Johnson at Downing Street for 30 minutes to discuss the threat of Iran and other issues.

Beleaguered by Brexit, Mr Johnson was applauded for his staunch friendship and support of Israel, but also stressed backing for a ‘two-state solution’, about which his opposite number indicated they would have to talk further. Mr Netanyahu currently favours annexation of Judea and Samaria in light of the abject failure of ‘land for peace’ exchanges.

Holocaust Memorial could be rejected