The man who led 79 million to faith 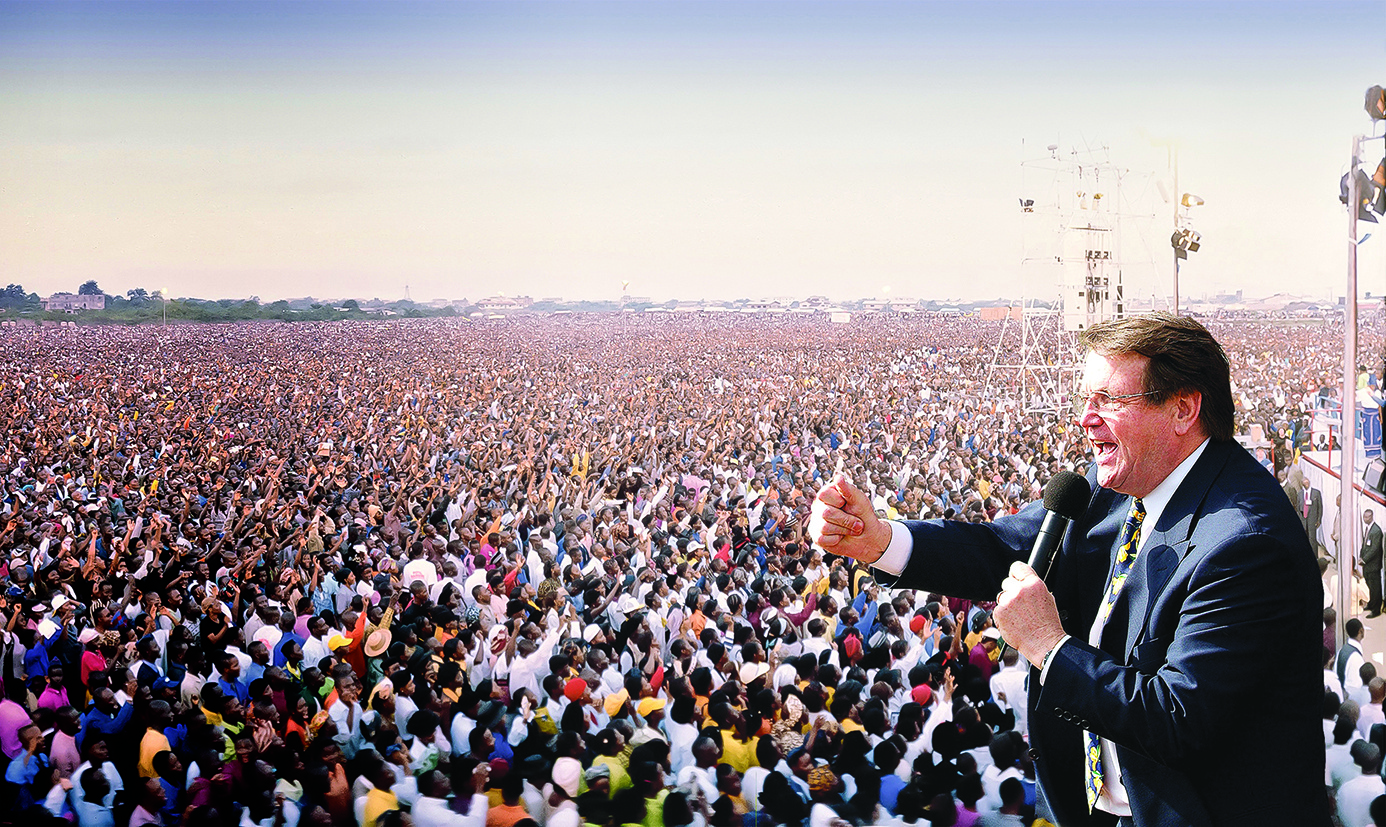 Reinhard Bonnke preached to an audience of 1.6 million people in Nigeria in 2000

GERMAN Pentecostal evangelist Reinhard Bonnke, who died aged 79 on 7 December, saw more than 79 million people become Christians through his ministry – a million for every year of his life!
Reinhard Bonnke was dubbed the ‘Billy Graham of Africa’ be- cause, although he preached around the globe, his biggest crowds were in Africa. In 2000, a record 1.6 million people gathered in Lagos, Nigeria, to hear him speak of God’s healing power. Bonnke attended the Bible College of Wales which was led by Samuel Rees Howells, son of the legendary intercessor Rees Howells. Samuel Howells’s ex- ample deeply inspired Bonnke, who prayed, “Lord, I also want to be a man of faith. I want to see your way of providing for needs.” After college, Bonnke took up a pastorate in Hamburg, Germany. When Bonnke was 21, the aged healing evangelist George Jeffreys met and blessed Bonnke the day before he died. Bonnke would later point to that encounter as the moment he received the ‘mantel’ of a healing evangelist.

He heard a voice declare, “Africa shall be saved!”

Through most of the 1960s, he pastored in Germany, marrying his wife, Anni, in 1964. In 1967, with two small children, the fam- ily relocated to the tiny South African kingdom of Lesotho as missionaries. The ministry was nominally successful, and then, Bonnke had a dream: he saw the entire continent covered in the blood of Jesus and heard a voice declare, “Africa shall be saved!” In 1974, Bonnke founded the Christ for all Nations (CfaN) mission in order to fulfil his dream of a “blood-washed Africa”. Dis- appointed that his first meeting was only attended by about 100 people, he determined to preach as if to thousands, until one man suddenly shouted, “I’ve been healed!”, followed by others.

“The dead have been raised, blind eyes opened, crippled legs made to stand and walk.
Demons have been cast out, depression healed, and families restored”

News of miracles drew thousands and ultimately millions to his multi-day evangelistic events. His website states: “The dead have been raised, blind eyes opened, crippled legs made to stand and walk. Demons have been cast out, depression healed, and families restored… The numbers have been so consistent and overwhelming that even to cynics it seems more impossible for them to have been faked than for them to be real.”

One anecdote relates how Bonnke was persuaded to pray for Israel, which had not been a concern of his before. When crying out to God one day: “Give me Africa!”, he heard the reply, “If you pray for Israel, I’ll give you Africa!”

HEART journalist Charles Gardner recalls interviewing the evangelist in 1995 for another Christian publication: “He told me how he was reaping where others had sown, particularly with the likes of the legendary David Livingstone in mind.”

“A great loss to Nigeria, Africa and the world”

Nigerian President Muham- madu Buhari paid tribute to Bonn- ke’s astonishing legacy, saying his death was a “great loss to Nigeria, Africa and [the] entire world”.
Bonnke’s worldwide campaigns were supported by Suzette Hat- tingh, who headed up his inter- cession department and later be- came his associate evangelist.
Following Bonnke’s retirement in 2017, Daniel Kolenda was named his successor.
Kolenda said: “Those who knew Reinhard off-stage can testify to his personal integrity, genuine kindness, and overflowing love for the Lord.”

“Let my mortal lips preach the eternal Gospel, and my mortal hands build your eternal Kingdom – to the glory of the Father.” (A prayer by evangelist Reinhard Bonnke)