Clear-thinking academics give invaluable
ammunition for the battles to come

The New Normal: The Transgender Agenda 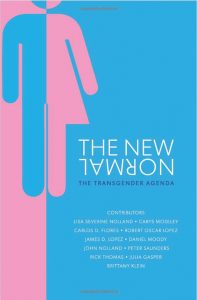 It seems that while the Church was asleep, the LGBT movement has established itself as the ‘new normal’.

The need for this book is stated starkly in its preface: “Solid church organisations and leaders have largely been ‘Missing in Action’… Some insist that ‘preaching the Gospel’ will sort things, unaware that the Gospel’s very essence and terminology (such as what sin even is!) are being hollowed out and re-defined.”

Thus this group of experts has undertaken a labour of love to dissect the assumptions, daring to expose the LGBT ‘Emperor’ bestriding our media and our education system. As Julia Gasper says in the final chapter, “We should be confronting the LGBT movement by pointing out its complete lack of any foundation of evidence either in the sciences or the humanities.”

This is a brave and important book, primarily featuring a series of essays from six different experts in their fields.

They tackle the LGBT agenda via theology, Christian practice, science, psychology, medicine, law, ethics and sociology. Reading through, their clear thinking and thorough research (there are plenty of footnotes) make you feel you’re in safe hands.

My favourite chapter is ‘I’m Transgender’ – How to Respond’, by Daniel Moody, because it drives straight to the heart of the contested question, ‘What is gender?’.

The essay on gender dysphoria stresses that, as Christians, “Our identity is not in our felt gender but in Christ, whether male, female, intersex or gender conflicted. In the words of John Wyatt, we are ‘flawed masterpieces’ undergoing restoration in the present and with a glorious future to come.” These are wise words and our anchor in a world that grows menacingly stranger by the minute.

Other essays cover the theological approach we should take with regard to children, gender dysphoria, sex reassignment surgery and transsexual rights and ideology in the UK. There’s a mine of relevant information in these chapters, and academic Julia Gasper emphasises the importance of this subject for Christians when she says, “In our lifetimes, the LGBT movement has carried out a coup-d’état in the western world. Armed with huge funding, it has taken over political parties, governments, education systems and the media, to impose its agenda on most of the population.”

The second half of the book features eight more essays by experts and covers fringe issues related to the subject, such as same-sex parenting, chastity, marriage and family, polyamory,
sex and the Bible, teenagers, Kinsey and LGBT icons. These are worth dipping into if you need extra colour, but I would recommend you to rather exercise your brain cells on the first part of the book, which concentrates on the core issues.

It is time we took a stand on such matters and a book such as ‘The New Normal’ will prove invaluable in providing us with the necessary ammunition for the battles to come.

Author and speaker Steve Maltz’s latest book, ‘Into the Lion’s Den’, explores how a Christian should respond to LGBT and related issues. His conference in Devon in October, ‘Foundations 10’, will examine these issues further. More information at www.saltshakers.com