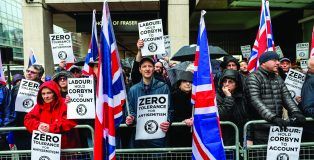 One in three of Britain’s 300,000 Jews are reported … END_OF_DOCUMENT_TOKEN_TO_BE_REPLACED

The story of how one of America’s greatest heroes was well and truly knocked off his pedestal almost overnight is a salutary lesson both for his and other nations today.

Charles Lindbergh gripped the world with his tremendous skills as an aviator, becoming the first pilot to cross the Atlantic when he flew non-stop from New York to Paris in the summer of 1927 – and that in a one-seater plane with no forward view!

Millions lined the streets of American cities to hail the heroism of this handsome boy from Minnesota; streets and schools were named after him; he was feted and wooed by politicians.

In an age when celebrities were generally confined to the glitz and glamour of the emerging film industry at Hollywood, Lindbergh captured the imagination in a way no-one else had managed.

But then, just as America was about to enter World War II, he rose to make a speech urging them to stay out of the conflict. By this time he was a known Nazi sympathizer, being much influenced by the ‘science’ of eugenics which sought to ensure the continuance of a pure race without physical, mental or other defects.

As for Jews, they were partly to blame for the war, along with Britain and America, in his view. In fact, he went on, they were a particularly malign influence because of their ownership and domination of “our motion pictures, our press, our radio, and our government”.

The high-flying hero crashed to the ground in the minds of his listeners almost before he had finished his speech, which was being carried on national radio. His name came off streets and schools and airports. And TWA (Trans World Airlines) stopped calling itself ‘the Lindbergh Line’.

A 1957 movie about his flight to Paris, starring Jimmy Stewart, was a failure at the box office. And as the years passed, he largely withdrew from public life.

By taking sides against the Jews, Lindbergh had touched the ‘the apple of God’s eye’ and was either ignorant or defiant of the Scriptures – that those who bless the seed of Abraham will themselves be blessed, but those who curse them will come under judgment.

The enigmatic aviator is featured among a host of characters – many of them anti-heroes – in Bill Bryson’s new best-seller One Summer – America 1927, a truly fascinating read with a liberal sprinkling of his trademark humor that also includes a peek at Henry Ford, the car magnate, who might have avoided some of his own troubles – including commercial ones – if he too had not insisted on berating the Jews. He did, however, regret breaking the Sabbath, admitting that his much-heralded Model A would have been ready in half the time had he not made its designers work at weekends and evenings.

Looking at the bigger picture, Britain’s rise and fall virtually parallels its actions for and against Israel. By the turn of the twentieth century, it was said that the sun never set on its empire with much of the globe covered in pink in our atlases. We were blessed with great power, authority and influence, and it is my belief that it was entirely due to the consistent way in which Evangelical Christians had prayed for and loved the Jews – because they read in the Scriptures that this is God’s will and command – to such an extent that they even prevailed on the Government of the day to do all in their power to provide a homeland for the Jewish people.

The result was the Balfour Declaration of 1917 – Lord Balfour was the British Foreign Secretary – which promised to work for such an outcome. And the opportunity for its fulfillment came within just nine days when General Allenby’s forces liberated Jerusalem from the Turks.

Britain was subsequently given the mandate over what was then known as Palestine but, conscious of Arab opposition, hesitated over the implementation of its promise and even allocated most of the territory originally earmarked for Israel to Jordan before the Jewish state finally rose from the ashes of the Holocaust.

As much as we were blessed when true Christianity influenced our politicians, we have come under a terrible curse since successive governments (backed by a sleepy church) sought to appease Arabs rather than look to Israel’s best interests. We lost our empire, and we lost our way as a nation which once spread the good news of Jesus, the Jew, all over the world. We have rejected the Judeo-Christian civilization on which our nation was built, so it’s hardly surprising that the social fabric of society is collapsing around our ears.

Part of the ongoing problem with the West, especially as it affects Israel, is that the church needs to wake up. Perhaps you can pray for us to that end.

I’ll close by paying tribute to Mike Evans, the American Jew (and disciple of Jesus) behind the new Friends of Zion Heritage Centre in Jerusalem which seeks to demonstrate that true Christians through the ages have loved and supported the Chosen People – some of them even paying with their lives. These include the Dutchwoman Corrie ten Boom, whose family hid Jews from the Nazis. She ended up in a concentration camp and had to watch her sister being murdered at the hands of a guard, whom she later met – and forgave! Another such heroine was Scotland’s Jane Haining, who died in Auschwitz after being ‘convicted’ of the crime of loving the Jewish girls in her care at a boarding establishment in Budapest.

God is looking for heroes who seek his honor, his ways and his glory.

END_OF_DOCUMENT_TOKEN_TO_BE_REPLACED

THE IMPORTANCE OF STUDYING THE SCRIPTURES FROM A JEWISH PERSPECTIVE

God chose his Scriptures to be written and preserved by Jewish men from a Jewish culture and from a Jewish frame of reference.  God also chose our Saviour Messiah Jesus to be born a Jew and raised in a Jewish family.  His life was played out in the Jewish culture of 1st Century Israel. We need to understand the Scriptures as God wrote them through the Jewish perspective if we are to “rightly divide the word of truth” (2 Timothy 2:15).