Son of Holocaust survivor continues to save lives in disaster zones 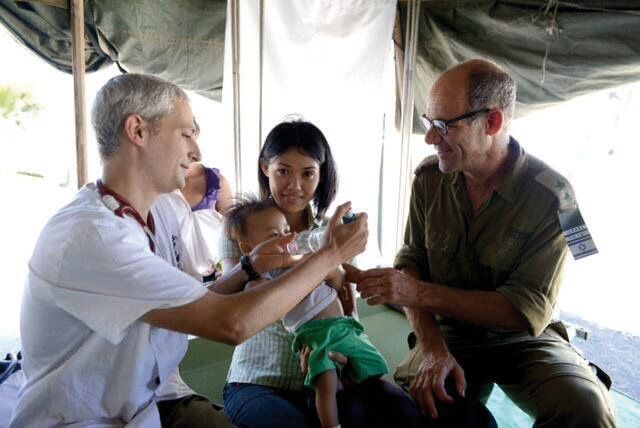 AN ISRAELI DOCTOR – whose father was spared from the Holocaust by a Christian woman – is among those on the frontline of rescue missions to disaster zones, most recently the Philippines.

Commander of Israel’s IDF Field Hospital Unit, Dr Ofer Merin, is described as “an expert in helping people survive”. The Jewish Telegraph Agency reported that his 125-member medical team had been seeing about 300 patients a day after Typhoon Haiyan devasted the Philippines.

They have also carried out rescue work in Haiti and Japan. Israelis, said Dr Merin, are “ready to drop everything and come and assist anywhere in the world that we need to be”. No wonder, as Merin himself is the result of a brave rescue.

During the Holocaust, in a ghetto in Poland, all the Jews were rounded up and put on trains by the Nazis. One mother knew the final destination of the trains – Auschwitz, according to Breaking Israel News, which published Dr Merin’s dramatic story.

“With one last look at her children, a son aged eight and a daughter aged six, this mother threw her children out of the train,” said the agency. “The children ran away to a small Polish village. There, a young Christian lady hid these two children for the duration of the war.

“The war ended and the children survived. A few years after the war, with the founding of the State of Israel, the children made their way to Israel and began their lives here. The boy eventually got married and had three children. Dr Merin is the second son of this boy who was saved by the kindness of the young Christian woman.”

Dr Merin is quoted as saying he believes his story embodies a principle of his, a familiar saying in Judaism, “To save one person’s life is to save the whole world”.

His medical team is on the way immediately when a disaster happens, according to Breaking Israel News. “Some say don’t leave Israel if you don’t know where you are going to go,” said Dr Merin. “No – [as in the case of the disaster in Haiti] if we would have waited, we would have lost 24 hours.”

The report added, “Arriving with the unit are not just medical and rescue professionals, but a host of the latest technologies, some of which are not even available in the countries they are working in. To further add to the extraordinary efforts of the Field Hospital unit, all equipment is left behind, regardless of circumstances.”