When US Secretary of State Mike Pompeo announced that Covid-19 came from a Chinese lab, the UK media reported that the science did not support that idea. 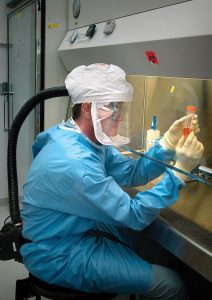 An influenza researcher in a bio-lab in America (Wikipedia)

However, independent scientific research has since emerged that concludes Pompeo may be right.

On 3 May Pompeo declared: “I can tell you that there is a significant amount of evidence that this came from that laboratory in Wuhan.”

The intelligence agencies of the US, Canada, the UK, Australia and New Zealand, the ‘Five Eyes’, said they had no evidence that the virus escaped from a Wuhan lab, although they agreed that China knew about the outbreak in early December and tried to hide it.

According to the Australian Daily Telegraph, a ‘Five Eyes’ dossier confirmed that the initial cover-up allowed the virus to spread across the globe to the “endangerment of other countries”, but the agencies disagreed over the source of the outbreak.

The novel coronavirus was optimised for penetration into human cells

However, LifeSiteNews reports that a team of Australian scientists has produced new evidence that the novel coronavirus was optimised for penetration into human cells instead of animal cells, suggesting it was indeed altered in a laboratory.

Although the study is preliminary and had not yet been peer reviewed at the time of writing, it suggests that the virus did not come from a wet market but the Wuhan Institute of Virology.

Lead researcher Prof Nikolai Petrovsky stated that it is “entirely plausible that the virus was created in the biosecurity facility in Wuhan… a laboratory that was known to be cultivating exotic bat coronaviruses at the time.”

Meanwhile, LifeSiteNews also reports that evidence from Wuhan’s morgues and crematoriums suggests that Covid-19 deaths were 20 times higher than the official count. The Chinese government claims that only 2,535 people died, but a more realistic number is 50,000 dead. In addition, LifeSiteNews claims its articles on the cover-up have been deliberately suppressed by Facebook.