“Jesus set me free from depression”

Excruciating back pain and four years of depression made Daniel Richards, 19, suicidal. But thanks to his mother’s persistent prayers, divine intervention was just around the corner

“If it wasn’t for Jesus, I’d either be dead or in a psychiatric hospital.”

That was in March 2019, when he’d already spent weeks in his bedroom with the curtains closed, rocking on the floor or crying under his bed. “I didn’t want to live any more, but I was also afraid of what happened after death,” he told HEART.

His life hadn’t always been a struggle. As a boy growing up near Midhurst, West Sussex, Daniel used to enjoy reading the Bible, praying and going to church with his mother, older brother and sister. However, his father wasn’t a Christian, so there was no paternal encouragement to develop faith and by the time he was eight, Daniel didn’t understand why he had to be “stuck in church” while all his friends were having fun.

Then a family tragedy shocked Daniel deeply. The day before his ninth birthday, his uncle, a successful lawyer, committed suicide. Worse, Daniel’s cousin found his father’s body hanging from a tree. A few months later, Daniel decided being a Christian wasn’t for him.

By the age of ten, he had developed a passion for playing the drums and would practise for hours at a time. As a teenager, his ambition was to join a rock or metal band, although meanwhile he went to college to study engineering.

However, his dreams of fame were dashed when a niggling pain in his back flared up. “The pain felt like a knife inside. I could barely drive to college without being in agony. Worse still, I was forced to give up drumming. I was devastated.”

This was the start of a four-year nightmare which only ended in March 2019. Disillusioned with life, Daniel felt that his mind was “getting really unstable”. He didn’t tell anyone and without help soon developed mild depression.

After finishing college, he worked in Sainsbury’s and held various other temporary jobs. “My life wasn’t going to plan; my hopes and dreams were crumbling.”

“I thought Mum was giving me religion to cope”

However, Daniel’s mother, Tania, a committed Christian, was faithfully praying for him. Both sides of the family had a history of depression and suicides, and she believed his mental health issues had a spiritual root.

But Daniel became furious whenever she suggested that he needed Jesus. “I was hostile towards my family and thought Mum was giving me religion to cope with my problems.”

Terrifying panic attacks followed, causing uncontrollable shaking and tightness of breath. Yet Daniel was still determined to fix his life himself. When he turned 18, he started drinking and clubbing to fill the void inside. Weightlifting also consumed him and he idolised gargantuan bodybuilder Tom Platz.

But severe back pain continued to dog him, and although his father paid for him to see numerous doctors, including private specialists abroad, tests were inconclusive; the doctors even suggested that his condition might be stress related. Cognitive behavioural therapy was prescribed, which proved too much for Daniel. He also refused antidepressants, as, ironically, one of their side effects was severe depression.

Meanwhile, the expensive search for a cure reminded Tania of the woman with the haemorrhage in Luke 8 who was healed by Jesus after spending all she had on doctors.

Praying for a prodigal son 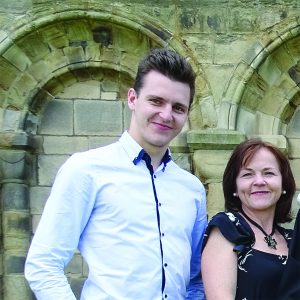 Daniel with his mother Tania

Daniel’s mental health continued to deteriorate during 2018, leading his mother to pray more intensively. Happily for Daniel, Tania was inspired to keep praying by Jesus’ parable of the persistent widow, who refused to give up until she obtained justice. Tania spent a lot of time in Daniel’s room, interceding for her prodigal son to find God again there.

“My eyes were fixed only on God; no one else could help”

“I began fasting frequently, knowing that it was a big spiritual battle,” she recalls. “I was going through a test of my faith to see if I could put my complete trust in the Lord. All my prayers were based on the Word of God, reminding God of his promises and pleading for his mercy and grace. Knowing that I could lose my son at any point made me persist – my eyes were fixed only on God, as no one else could help.”

But the more she prayed, the worse things seemed to get. Daniel recalls struggling with twisted, perverse thoughts, some too evil to name. “I would spend sleepless nights trying to get them out of my mind. Then came suicidal thoughts like, ‘Go into the woods naked and hang yourself.’ I would go for late night drives and smoke in a field, crying because I felt utterly hopeless.

“I used to tell Mum that I wished I’d died in my sleep. Every morning she would peep round my door to check I was still alive.”

“I showed up to work still high on drugs”

One morning, after getting “smashed” on cocaine and alcohol with an old friend the night before, he woke up in someone’s attic, unable to remember how he’d got there. “I showed up to Costa Coffee, where I was working, still high on drugs. My eyes were red and wide as saucers. My manager didn’t fire me, but I got sent home. I felt completely humiliated.”

He spent weeks shut in his bedroom

Unable to cope any more, Daniel finally quit his job a few months later in February 2019. Still only 19, he spent weeks shut in his bedroom, only leaving to eat and smoke.

“I was rocking on the floor or lying under my bed, crying”

“I closed my curtains and sat alone with my alcohol and my sorrows. I became paranoid, rocking on the floor or lying under my bed, crying. I knew I was going insane and was terrified of ending up in a psychiatric hospital.”

“I was overcome by pure happiness”

Although Daniel would still say a half-hearted prayer for help sometimes, he had no real desire to change his lifestyle.

But late one evening in March 2019, Daniel hit rock bottom. Alone in his car and desperate to end his misery, he googled, “Least painful ways to die”.

“I didn’t want to live any more, but I was also afraid of what happened after death,” he recalls. “What if it was something worse?”

A voice in his head cut across his despair with the simple command: “Go to your room.”

“God, if you are real, please help me”

Once home, he knelt in his bedroom and prayed with his whole heart: “God, if you are real, please help me. Please take this depression from me. I’ve tried to fix it myself, but I can’t. I’m willing to turn from the life I was living. Please save me and I’ll do whatever you want me to do.”

Nothing happened immediately, but undeterred, Daniel announced to his mother, “I’ve come back! I’m a Christian again.”

“No drug or party could compare to that sense of joy”

At that very moment, his depression finally lifted. “I was overcome by a feeling of pure happiness. I started crying and laughing. No drug or party could compare to that sense of joy, satisfaction and peace.”

Overwhelmed, Tania got on her knees: “I just started crying and praising God. Indescribable, perfect joy filled our hearts.”

Daniel’s sister Olia was also astounded by her brother’s dramatic transformation: “It was a 180-degree turnaround. His face looked different and he started apologising for his wrong attitude towards me.”

The miracle, Daniel believes, had been triggered by his verbal profession of faith. “The depression left me the moment I told a witness, my mum. I believe I was set free from a demon of depression.”

Shortly afterwards, Daniel attended Bethel Christian Assembly in Shalford, near Guildford – and for the first time, really enjoyed the service. “I’d gone a few times before, just for Mum’s sake, but the worship used to make me feel weird and horrible. Once I became a Christian, I loved worshipping Jesus!”

Daniel got rehired at Costa and couldn’t stop telling customers about how Jesus had changed his life. “I remember thinking I felt so happy that I wouldn’t mind living in a cardboard box for the rest of my life if God asked me to,” he says.

He also got rid of unhelpful ties with the past. “I stopped hanging out with my worldly friends and threw away a black hoodie which I used to smoke in whenever I got severely depressed.” 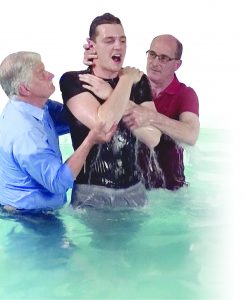 June 2019 saw him baptised in water by full immersion as a symbol of his newfound faith. But Daniel wanted more: “Jesus said in Matthew 12 that once a demon leaves a person, seven worse spirits can enter if your body remains ‘empty’, so I knew it was important to be ‘filled’ with the Spirit.”

His prayer was answered two days later. “While praying with Mum, I started ‘speaking in tongues’.” Daniel knew that this new prayer language was one sign of being ‘baptised’ in the Holy Spirit, as experienced by Jesus’ disciples (Acts 2:4).

And whereas Daniel had previously hated reading and couldn’t concentrate, he found that God had given him a desire to read the Bible; in just a few months, he’d read it right through.

A new job also followed and Daniel now works in sales for a church friend who owns an office supplies company.

“You need to know where you’re going when you die”

To young people in a similar situation, Daniel says, “Don’t be tempted by the things of this world; they don’t last. You need to know where you’re going when you die, but you can’t just add God to your life; you have to submit to him completely. Pray to God with your whole heart and ask for forgiveness from your sins.” 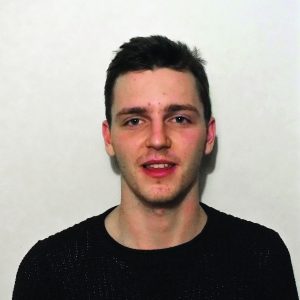 Today, the smile on his face and the sparkle in his eyes say it all; the 20 year old hardly recognises his old, depressed self and says, “I am completely transformed. My old desires have been buried and I have a new life. My back is also a lot better!”