Day of prayer for Britain 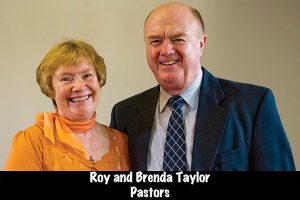 Around 1900 believers packed out the available space in the Emmanuel Centre to unite in prayer for the nation.

There was a strong sense of occasion as the visitors were reminded that the King had called a national day of prayer exactly 77 years earlier.

Afterwards evangelist David Hathaway, who had convened the event with Roy and Brenda Taylor and Dennis Greenidge, rejoiced in the huge response to the day: “God’s blessing was with us powerfully, and the general opinion is that we must repeat it. I had called the day because of the need for the nation to repent for turning away from God.”

He had also sent a declaration to the Queen via a trusted channel, assuring her of her Christian subjects’ support for her as head of the national Church. 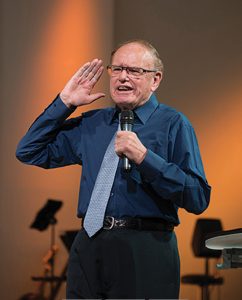 Finally, he urged: “Please join me in praying for a suitable time and place for our next National Day of Prayer; we must not quit until the battle is won! If God is on our side, he will fight with us and defeat the enemy!”

Dennis Greenidge also led prayer powerfully during the day and was joined by Pastors Clive and Jane Urquhart of Kingdom Faith Church, who led prayer for the nation’s youth.

Clifford Hill taught from Jeremiah and showed clearly how ancient Israel had crossed both political and spiritual ‘red lines’. The lessons for today were painfully obvious; judgement had followed disobedience and rebellion against God’s laws. He and David Hathaway agreed that the nation is under judgement. David Hathaway declared: “I fear if the Church doesn’t repent, it’ll be destroyed.”

Much corporate repentance took place for the sin of the nation, agreeing that only God in his mercy could deliver us.

Andrea Williams, CEO of Christian Concern, spoke briefly about how, from a legal standpoint, the Gospel is a matter of ‘public truth’ and therefore Christians should not be discriminated against for standing for biblical values. She also admitted that seeing so many gathered to pray had strengthened her resolve to keep fighting for Christian values in public life, despite the pressure and opposition. 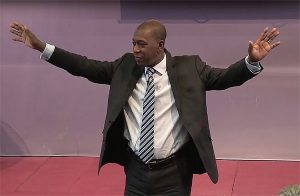 Dennis Greenidge has led prayer for the nation for several decades

Over 100 local groups gathered across the country as well. Denise Prichard, who met with two others in Farnham, said: “We prayed for repentance for the UK Church and also about our young people, bombarded by deceptions in today’s media. It was a joy to be part of the wider prayers going up to Heaven’s throne.”

An intercessor from Worcester Park, Surrey, wrote: “As seven of us prayed together, we strongly felt that the Church is at a crossroads. We repented of the lie of replacement theology and prayed it would be replaced by the truth of the Word. We enjoyed a sense of the Lord’s presence throughout.”

John Mummery, one of HEART’s longest serving local distributors, reported: “Here in Lindfield the URC church was open for prayer from 10am to 1pm. When I looked in there were 7 at prayer. The church supplied Bibles, hymn books and an A5 leaflet welcoming people and suggesting relevant Scriptures, songs, and suitable items for prayer. Then at 3pm at the Evangelical Free Church, Pastor Mervyn Weeks led 15 people through about six relevant prayer topics. He repeated this at 6.30pm, when I attended along with nine others for a good hour and a quarter of deep, fervent prayer.”

My experiences prove that Halloween is far from harmless