DAVID HATHAWAY spoke in Britain for the first time in many years at an event hosted by the Shekinah Legacy, at Seahaven Academy, Newhaven, from 11-12 July

Several hundred people packed a school hall from July 11 to July 12 to hear the man with Britain’s largest evangelism ministry speak. Visitors came from as far as Cornwall. 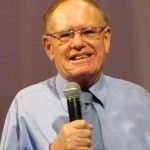 Here are some paraphrased highlights of what he said:-

Standing up for the Gospel

I live in the most dangerous town in Britain. It’s known as the Islamic Republic of Dewsbury and the particular Muslim sect that virtually controls the town is the radical one which trained the London bombers and wants to build an enormous mosque in London. Currently we have the largest mosque in Britain – it houses 15,000 out of a town population of 50,000. But a local curate friend of mine is allowed to go on the local Muslim radio station and debate his beliefs – because Muslims respect people who have strong faith.

I’ve been working there for many years and am allowed to preach there. Someone was sent to listen to one of my meetings to see if I was subversive, but reported, “He’s just talking about Jewish history”! We’re seeing many Russian Holocaust survivors come to faith in Yeshua (Jesus). Although I spent a year in a Communist jail in the 1960s for my Christian activities, I told them, “How can I speak to you, when you’ve survived places like Auschwitz?” But they replied, “You can because the Russian prisons and Gulag were worse than Auschwitz…”

I’d love to see a change in the Church. The Church really must wake up and start preaching the Gospel because the time is so short. If you’re not seeing miracles, there’s something wrong.

It’s already started. I received a letter inviting me to a planning meeting. But when I go, it will be to preach the Gospel.

This is the last battle on earth, between Satan and the forces of God for control of this world. Christians must know their authority – we’ve been given spiritual authority which will open doors to preach the Gospel. I see this regularly, such as when governments in Eastern Europe have allowed me to preach in stadiums and even broadcast it on their national TV!

In Romans 1:16, Paul is speaking to the Italians and says “I’m not ashamed of the Gospel of Christ because the Gospel of Christ is the power of God to deliver.” I want you to understand something of the power and authority that we have over the devil. The devil is not going to win. We win the battle through Christ.

We have to pray more. I have a favourite ‘prayer mountain’ where I can spend time alone with God.

Allah is not the same as the Christian God. Our God is a God of love who does not encourage his followers to kill non-believers.

My call is to preach the Gospel in Europe. People don’t realise that Europe is the world’s least evangelised continent.

God revealed the truth about the EU to me over 15 years ago. We were the first people to reveal that its Parliament building in Strasburg was built deliberately as a replica of the Tower of Babel in order to show the whole purpose behind the EU, which is rebellion against God.

In autumn 2008, we published an issue of our magazine showing exactly what would happen if we remained in the EU. Britain will be divided into ten separate parts and the whole of the south coast will become part of France. Why? Because for 1,000 years Britain has stood firm for the Gospel of Jesus Christ and there is no nation apart from Israel that God has used so powerfully to spread the Good News. People complain about the colonies, but every single nation we colonised received the Gospel. Today the strongest and fastest growing churches have sprung from those colonies. To me that’s a miracle and that’s why the devil is seeking to destroy this nation. So part of the plan is that Britain would be broken up so we can never again resist Europe – or present the power of the Gospel.

God reveals prophecy to me, not because I’m a prophet, but because I’ll go and preach the Gospel to those who are perishing. We’ve been criticised for printing things in our magazine which are now evident.

We see thousands of people healed; I can’t heal – Jesus is the healer. I’ve been healed of throat cancer and lung cancer (although I’ve never smoked) supernaturally, both times.

Our ministry runs entirely by faith, but people don’t realise how much it costs to spread the Gospel. We’re preparing a mission to Poland this September and have had 250 people working there for nearly two years, so our wage bill is around £25-30,000 per month. But most of that nation will hear the Gospel.

David Hathaway’s magazine, ‘Eurovision’, is available free on request from his ministry office in  Dewsbury. For copies of the conference CDs call 0845 0132404 or email info@shekinahlegacy.org