LONDON, February 11, 2019 – Revelations expected to further stoke the fires over Jeremy Corbyn’s handling of anti-Semitism within the Labour Party have been published in the British press.

The Mail on Sunday dedicated a dozen pages of coverage to initial serialisation of a new book by one of the country’s leading investigative authors.

Tom Bower’s Dangerous Hero (William Collins, £20) is a damning expose of a man “not fit to govern”, even in the words of long-time friend and former hard-left MP Reg Race.

“He’s not fit to be leader of the Labour Party, and not fit to be Britain’s Prime Minister,” the man who worked closely with Mr Corbyn over three decades is quoted as saying.1

Coinciding with the serialisation comes news of vicious racist attacks against Jewish Labour MP Luciana Berger over claims she plans to join a breakaway movement along with several others.

And this was followed by an admission from the party’s deputy leader Tom Watson that the Liverpool parliamentarian is indeed being bullied by constituency activists, as claimed.2

In doing so, Mr Watson repeated his call for the party in Liverpool Wavertree to be suspended over its treatment of her.

Alarmingly, tucked in among the acres of copy on Mr Corbyn straddling the voluminous Sunday paper was the observation that he was ‘insult-proof’. 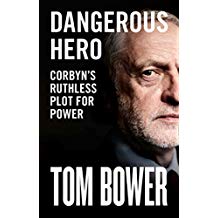 The culture of intimidation that is shaping today’s Labour Party is a culmination of 40 years of following Lenin and Trotsky’s bloody blueprint of seizing power, purging moderates and crushing dissent, Bower concludes.

“And, just like today, the man secretly driving it all swore blind that it had nothing to do with him.”

Upon his resignation in 1992 as Corbyn’s constituency agent, Keith Veness is quoted as having said: “You’re an anarchic shambles, without any discipline.”

The leader of Her Majesty’s official opposition has famously talked of engaging in “a kinder, gentler politics”, but a very different story of ruthless tactics is emerging.

A relentless campaign to root out moderates classified MPs into five categories in which every Jewish MP was ‘hostile’ or ‘negative’ including former Labour leader Ed Miliband, who represents the Doncaster North constituency in my hometown.

High on the list of targets was Ben Bradshaw, the MP for Exeter in Devon, who denounced Corbyn as a “destructive combination of incompetence, deceit and menace”.

And the intimidation of Ms Berger was not unique. “Many female Labour MPs, particularly Jews, complained of renewed abuse by the Left,” writes Bower.

Corbyn was evidently an academic failure who apparently doesn’t read books, which is a shame because, for his 16th birthday, his mother gave him a collection of George Orwell’s essays. Orwell’s Animal Farm – a classic allegorical tale of the destructive and hypocritical dogmatism of communism – might have proved a useful lighthouse keeping his ship away from the rocks.

The trouble is, he has failed to build his life on the Rock – Jesus, the Jewish Messiah – which ultimately explains his reluctance to deal effectively with gross anti-Semitism within his party.

Opposition to Israel is usually associated with denial of God, for it is the God of Israel whom Christians worship and who forms the basis of our Judaeo-Christian civilization which the likes of Corbyn are so keen to destroy.

In its place, all they have to offer is the prospect of a lifeless, colourless, totalitarian regime that imprisons people into ghettoes of misery, poverty and purposelessness.

But the greatest teacher of all time said: “Watch out for false prophets. They come to you in sheep’s clothing, but inwardly they are ferocious wolves. By their fruit you will recognise them.” (Matthew 7.15f)

And then he added: “Everyone who hears these words of mine and puts them into practice is like a wise man who built his house on the rock. The rain came down, the streams rose, and the winds blew and beat against that house; yet it did not fall, because it had its foundation on the rock.

“But everyone who hears these words of mine and does not put them into practice is like a foolish man who built his house on sand. The rain came down, the streams rose, and the winds blew and beat against that house, and it fell with a great crash.” (Matthew 7.24-27)