Foreign Secretary regrets our turning back refugees from Nazi-occupied Europe

LONDON, February 6, 2019 – Foreign Secretary Jeremy Hunt’s apology over Britain’s treatment of Jews during the Mandate of Palestine is an encouraging development to be greatly applauded.

But it has been a long time in coming. Not from him, I mean, but from successive British governments. He is believed to be the first holder of this office to have acknowledged our criminal behaviour over the plight of Jewish refugees trying to escape the Nazis.

Calling it a “black moment” in history, it involved denying entrance to the very homeland we had pledged to help recreate for the Jews at the time they needed it most. And Britain has been under a curse ever since, fulfilling the negative part of Genesis 12.3 – that those who curse the seed of Abraham would face judgment.

Mr Hunt was addressing the annual parliamentary reception of Conservative Friends of Israel, hailing the “very strong relationship” between Britain and Israel and declaring Israel’s right to self-defence as being “absolutely unconditional”.

But he added: “There have been some black moments when we have done the wrong thing such as the 1939 White Paper which capped the number of visas issued to Jews wanting to go to the British mandate of Palestine.”1

Anne Heelis, who heads up a group2 dedicated to comforting those who suffered as a result of British Mandate policies, said this “wonderful development” had come just a day after confession for our role was made during a Holocaust memorial service in Northern Ireland.

“Hundreds of thousands of Jewish people could have escaped death in the Nazi concentration camps if they had been allowed free entry into their ancient homeland, but Britain cruelly blocked this way of escape by severely restricting Jewish immigration,” Anne said. 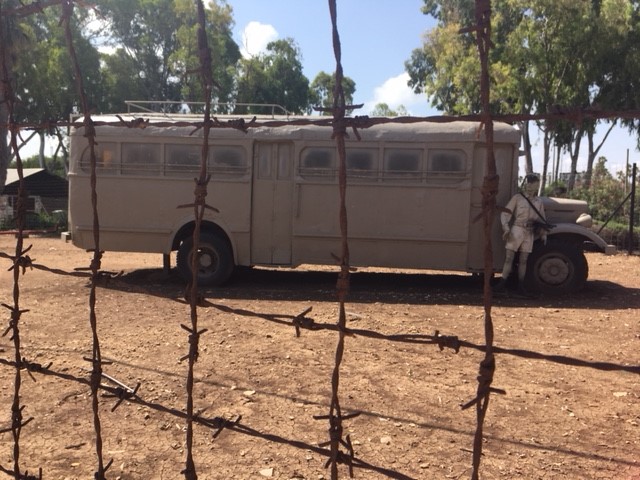 The Atlit detention camp, near the port of Haifa, where many ‘illegal immigrants’ were held by the British. (Gemma Blech)

Those who had been praying for a change of heart were “deeply grateful” for this development, and though Mr Hunt’s remarks were “most welcome”, they did not amount to an apology.

“They are indeed a wonderful answer to prayer and a great encouragement to continue praying with broken hearts for our government to make a full apology to Israel. There is still a deep wound in the heart of many Israelis as a result of Britain’s misconduct of the Mandate.”

Rosie Ross, whose organisation Repairing the Breach has also been working with those who suffered under the Mandate, said Mr Hunt’s statement was “a major breakthrough” that was clearly an answer to prayer, some of which has been specifically targeted at the Foreign Office.

She plans to thank Mr Hunt personally and also looks forward to a full apology.

Because the 1917 Balfour Declaration – promising to do all we could to aid Jewish repatriation – had subsequently been legitimised both by the 1920 Treaty of San Remo and the League of Nations in 1922, Britain had all the delegated power she needed to rescue many thousands of God’s chosen people from disaster.

But they failed to act because of Arab opposition, choosing to pursue a policy of appeasement that had never worked with Hitler. And we are still suffering the consequences, with the Middle East up in flames, the rest of Europe in turmoil and Britain in particular in a state of utter chaos and bewilderment.

We lost our empire, beginning with India in 1947, along with much of our power and influence and, as we succumbed increasingly to secularisation, we broke loose from our moral moorings. We also lost our sovereignty as we got sucked into the godless European whirlpool which further weakened our Judaeo-Christian foundations.

All this leaves us frantically splashing about in an ocean of confusion while the political elite are engaged in a desperate bid to avoid carrying out the people’s wish of regaining our national pride.

I pray that Mr Hunt will stick to his guns, and I would like to encourage him by emphasising the undeniable link – both at an individual and national level – between political longevity and treatment of the Jews.

It is worth noting, for example, that the three longest-serving British Prime Ministers of the modern era – Harold Wilson, Margaret Thatcher and Tony Blair – were unflinching in their support for the Jews. Mrs Thatcher not only helped save a Jewish girl’s life from the Holocaust but also faithfully served her strongly Jewish constituency throughout her parliamentary career and Mr Blair inaugurated the annual Holocaust Memorial Day to help ensure it doesn’t happen again.

Others, including Neville Chamberlain, Anthony Eden, James Callaghan and even Winston Churchill, disappeared from the political scene after letting God’s ancient people down.3

Where are the great empires of the past – Egyptian, Assyrian, Babylonian, Greek and Roman – who have treated the “apple of God’s eye” (Zech 2.8) with disdain? They are buried in the dust of history.

With this in mind, Christians United for Israel UK has launched Operation Mordecai to highlight the threat to Israel and the West posed by Iran with the primary aim of ensuring that Britain positions itself on the right side of history by defending Israel against tyranny.

The campaign takes its inspiration from the biblical account of Esther’s cousin Mordecai who, having heard of a plot to annihilate the Jews, sought the Lord, warned about what was planned and took action.

Let’s not go the way of Ireland, Amnesty International or Jeremy Corbyn’s Labour Party. Ireland is currently pushing through legislation designed to boycott the sale of Israeli products from so-called “illegal settlements in occupied territories”.4 They are referring to Judea and Samaria, which is the heart of Israel though obviously disputed by those who oppose their right to the land (which, as I said, is theirs by international treaty as well as God’s sovereign Word).

Amnesty International is calling for a boycott of Israel’s tourism industry in the same region, accusing them of “occupation, human rights violations and war crimes”.5

Paul Charney, chairman of the Zionist Federation of the UK and Ireland, said the humanitarian organisation thus demonstrates its lack of neutrality by whitewashing any Palestinian culpability for the conflict.

“Amnesty must recognise the incitement, the children’s television programmes encouraging violence and terrorism, and the salaries to convicted terrorists under the Palestinian Authority’s ‘Pay to Slay’ policy, to name but a few of the many disgraces which bear much responsibility for the current situation.”

He added that such boycotts harm the very people they wish to help.

Returning to our relationship with the Jewish state, Labour ties with its sister party in Israel were officially cut last year over its handling of anti-Semitism, which bodes ill for any potential Labour-led government.

It was in 2016 that Mr Corbyn refused an invitation from Isaac Herzog, then leader of Israel’s Labour Party, to visit Israel and tour the Yad Vashem Holocaust museum.

Herzog, now chairman of the Jewish Agency for Israel, is reported to be “extremely distraught” by what is happening in Britain’s Labour Party.6

So should we be. And our Foreign Office has a bad record of dealings with Israel; so let’s hope Mr Hunt’s statement signals a turning of the tide.

For we do not wish to be numbered among Israel’s enemies, of whom the Psalmist wrote: “Come,” they say, “let us destroy them as a nation, that the name of Israel be remembered no more.” (Psalm 83.4)

And Psalm 146 adds: “Do not put your trust in princes, in mortal men, who cannot save. When their spirit departs, they return to the ground; on that very day their plans come to nothing.” (verses 3-4).

The forgotten friend of Israel