Do we ever stop to consider just how wonderfully special our planet is?

If you bought a new house with all the mod cons, you would know it was specially designed to live in. And the same goes for our amazing planet!

Life on earth is only possible because of unique conditions which scientists sometimes call “fine-tuning”.

Is this a lucky accident, or did a wise Creator design it for our benefit?

Let’s have a brief look at some of the features which make earth unique.

If earth’s diameter varied ten per cent either way, life would be impossible 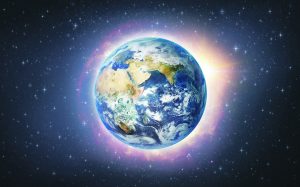 The earth’s diameter is 8,000 miles. If it varied ten per cent either way, life would be impossible. Were it only 7,200 miles, its magnetic field would be weaker, allowing the “solar wind” to strip away our atmosphere.

This layer of gases around the earth allows us to breathe and protects us from meteorite bombardment.

Conversely, a wider diameter of 8,800 miles would double the weight of the atmosphere, increasing the total amount of water and probably flooding the whole planet.

The earth’s orbit lasts 365¼ days, and its 23½ degree axial tilt gives us our four seasons. This allows crops time to be planted and harvested. Imagine if the earth took 84 years to orbit the sun, like Uranus, or only 88 days, like Mercury!

The earth’s 24-hour rotation period is very convenient. A longer period would mean excessive heating during the day, but life-destroying cold at night.

Most of the other planets in our solar system have much longer or shorter periods, ranging from Saturn’s ten hours to Venus’s 43 days. Earth also has an ozone layer that protects us from deadly solar radiation which could destroy all life in minutes.

The Bible says: “God… did not create it to be empty, but formed it to be inhabited.” (Isaiah 45:18) As far as earth is concerned, there’s no place like home!

“God did not create the earth to be empty, but formed it to be inhabited” (Isaiah 45:18)

There is something else that makes our planet special: 2,000 years ago, God our Creator visited earth in the person of Jesus Christ. “For God so loved the world that he gave his only Son so that whoever believes in him should not perish but have eternal life.” (John 3:16)

That’s what Christmas is all about! Have you responded to God’s initiative and accepted the gift of salvation, freely available through the death and resurrection of Jesus?