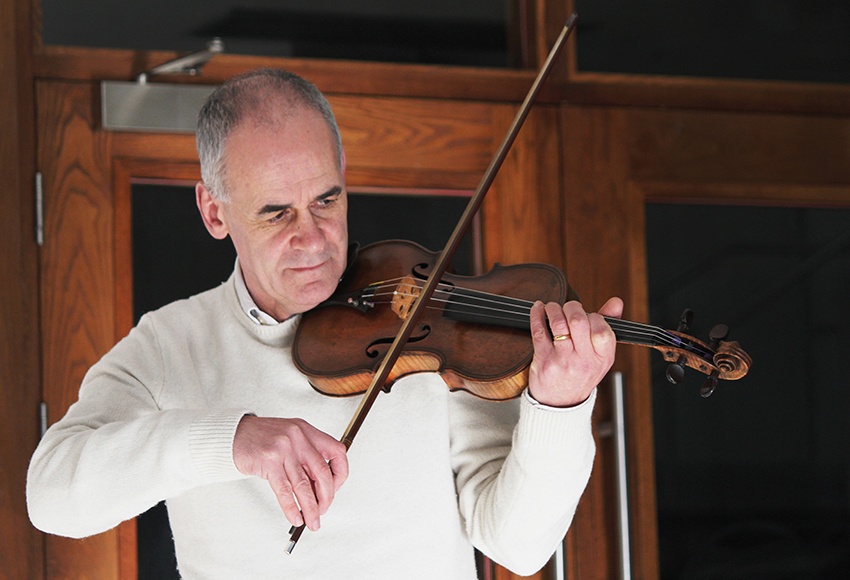 Pastor and professional musician Alex Robertson wrote a provocative book about the power of music over 20 years ago. He spoke to HEART about why Christians need to heed his warnings more than ever

When it comes to music in the Church, classical violinist and pastor Alex Robertson is not afraid of controversy.

His book ‘Playing with Fire: The Use and Abuse of Music’ asked radical questions that challenged Christians to check whether music captivated them more than God.

“When I wrote the book in 1996, there was a lot of material for and against rock music, but nothing explaining what makes a particular style godly or ungodly – ie the spirit behind the music and the message its composer was attempting to convey,” he says. “I tried not to present too many conclusions so that readers would think for themselves.”

It turns out that his views haven’t really changed since ‘Playing with Fire’ was published. Rather, he says that Christian music has progressed along lines he foresaw in the book: “Christian artists tend to follow the trends of the culture at large, which has been steadily moving away from God for the last 2,000 years. They will always introduce music styles that start out subversive and ‘on the edge’ but slowly become mainstream.

“It’s worth asking: why don’t teenage girls swoon at the Beatles’ ‘She Loves You’ any more? Is that because the anarchical spirit behind some rock music in the 60s has now been absorbed into society, and we’ve become conditioned?”

Alex’s years of musical experience, coupled with his passion for true worship, make him the ideal person to be asking these hard questions. A Cambridge University graduate and former member of the Brodsky string quartet, he has recorded two of his own albums and is involved with Epiphany, a creative Christian classical music ensemble.

To young people who want to be a godly influence on the secular music scene, he says: “If that’s your aspiration, you need to keep taking a step back and ask if you’re achieving what you set out to do – or has the world influenced you instead?”

Now a viola tutor at the Royal Northern College of Music, he is also on the pastoral team at The Lighthouse Christian Centre, Salford with his wife, Nancy. His main concern is the increasingly blurred lines between performance and worship in the Church. “I don’t have an issue with a Christian artist performing, but make sure you call it a performance! There’s nothing wrong with people clapping someone who’s singing songs about God – but at the end of the day, it’s about their skills, abilities and glory.

“It seems that the more middle of the road an artist is, the more likely they are to strike a balance between good music and a God-glorifying message. We haven’t seen someone like the singer Keith Green for a long time. He liked his bluesy riffs and wasn’t afraid of showing off, but his evangelist’s heart for Jesus far outshone his musical skill. He made it clear that his music wasn’t the main point.

“Thankfully we’ve moved away from the trite nursery rhyme choruses that made me turn up my nose as a new Christian in the charismatic renewal. Today the battle is to get through all the musical excellence which can pass itself off as God’s presence! We also need to look out for wrong teaching creeping into songs.

“To worship leaders, the message needs to go out more than ever that worship is not performance – it’s about coming into God’s presence. Ask yourself at the end of a worship time: ‘What am I walking away thinking? Was it just a good musical experience appealing to my self-esteem, or has God convicted and touched me?’

“The performance aspect always fades into the background if the driving force behind the musician is hunger for God.”