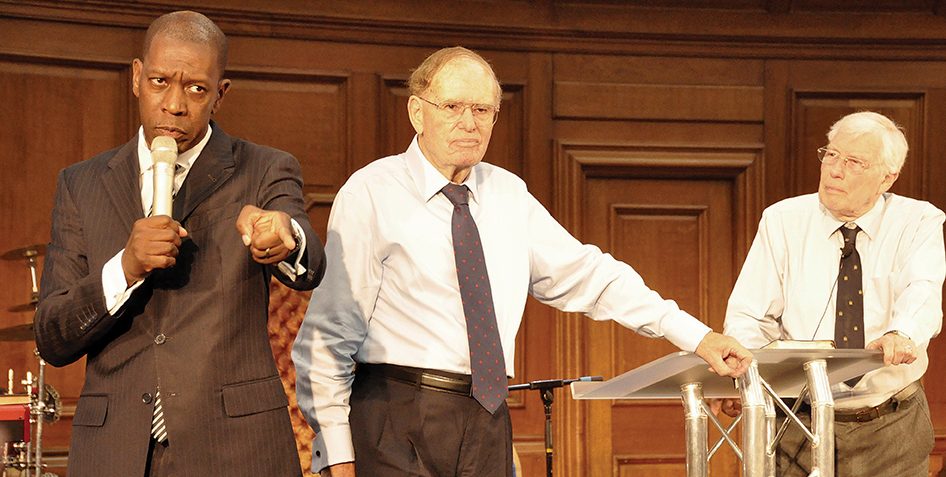 I WAS extremely encouraged by the tremendous response to the call to pray for the nation held on 8 September last year, 77 years since the Battle of Britain!

Many asked that we repeat it, suggesting that it should be even larger, so we could accommodate as many as 7,000, representing those who did not “bow the knee to Baal” as in the days of Elijah (1 Kings 19:18). However, having been much in prayer, I could not settle on a suitable venue but felt very strongly in my spirit that we need to pray in March.

The only date and place available is again the Emmanuel Centre on 23 March and, at this short notice, I feel it is right to return there. But we are possibly looking at a larger event in September.

I sense strongly that, as a nation, we are drifting away from God’s standards laid down in Scripture, that the nation is reeling under a complete breakdown of Christian morals in every part of national life: government, media, public life, even in the Church. We are even making accusations against those who cannot answer because they are dead. Yet the only answer must come from us; it is our responsibility as believing Christians to be both salt and light… but “if the salt has lost its savour” (Matthew 5:13)?

We must pray for the government which has clearly lost its way, unable to set a standard or lead with conviction. Financially first, most nations are living under a mountain of debt which it is impossible to repay – search online for ‘the debt clock’ and see what is happening in the USA.

Here in the UK there is talk of austerity and debt repayment, but study the figures – we are not reducing the national debt, only stemming the rate of its increase. When can these debts ever be repaid?

We are leaving an enormous black hole for our children to fall into. Where does the money come from that we borrow and spend; why are we moving so rapidly into a cashless society which will inevitably lead to the chip and “mark of the beast” (Revelation 19:20)?

The banks have stated that the contactless card has a chip which will eventually, for security, be placed in your hand. This system is already used in some offices for security.

I warned of the problem with Europe 20 years ago with my film, ‘The Rape of Europe’. This has in part already been fulfilled, not only with Brexit, but with the growing unease within Europe. Ask Poland and Hungary, see what is happening in Italy and Spain, question why even Angela Merkel recently struggled to form a German government.

The EU is clearly the “feet of iron and clay” in Daniel’s vision (Daniel 2:33), because it is fractured and will break; Britain is only the first to leave. Prophetically the EU will not be finally destroyed until replaced by Christ’s Kingdom; I believe the EU is the final empire which is destroyed by the “stone not cut by hand” (Daniel 2:34).

Jesus will come sooner than expected, “as a thief in the night” (1 Thessalonians 5:2). The Bible says that the Holy Spirit will “prevent this evil which is surrounding us, until he is taken out of the way” (2 Thessalonians 2:7); I assume that God will at that time rapture the faithful ones, then all hell will break loose.

Do we realise from my film, ‘The Rape of Europe’, that a militant section of Islam is already sweeping across Europe and will ‘rape the continent’, as in Greek mythology and biblical prophecy?

Our best form of defence is attack, not passive acceptance in the belief that we are a minority and must adapt ourselves and our Bible to accommodate ‘changing society’. We fight with a strong and positive Gospel, “the sword of the Spirit” (Ephesians 6:17) and with “effectual fervent” prayer (James 5:16).

As in the days of the Battle of Britain, we shall be saved by the ‘few’.

David Hathaway has been in ministry for 70 years, leading evangelism campaigns throughout Europe and Russia and initiated a national prayer day in Ukraine, which included its government.