WASHINGTON CATHEDRAL HAS ALLOWED A PRAYER MEETING for Muslims – provoking a protest response from Franklin Graham, the son of evangelist Billy Graham. 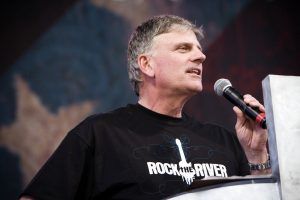 Franklin Graham berated the Episcopalian leadership of the national cathedral for allowing Muslims to hold their first prayer service inside the iconic building on November 14.

It was reported that Muslims separated into groups of men and women, took off their shoes, spread prayer rugs towards Mecca and prayed with their backs turned against the crucifix at the front of the chapel.

Franklin said: “Jesus was clear when he said, ‘I am the way the truth and the life. No one comes to the Father except through me.’ It’s sad to see a church open its doors to the worship of anything other than the one true God of the Bible who sent his Son, the Lord Jesus Christ, to Earth to save us from our sins.”

Just before the prayers started, a protester jumped out in front of the bank of TV cameras and shouted “Jesus died on that cross!” She was escorted away. The carpets were arrayed diagonally in the transept, to the side of the sanctuary, so that worshipers can face in the direction of Mecca without seeing crosses or Christian icons. Muslims are not supposed to pray in view of sacred symbols alien to their faith.