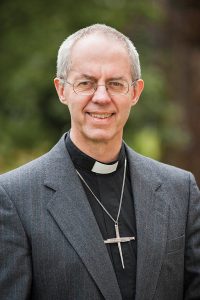 The Archbishop of Canterbury has said that he will pray for Donald Trump, but his congratulations on becoming US President-Elect were conspicuous by their absence.

Justin Welby previously said it would be “very challenging” if Trump won, and had told MPs that Trump’s statement about halting Muslim immigration was “certainly not a Christian thing to do, nor is it a rational thing to do.”

Archbishop Justin said he was praying that the USA would find reconciliation after a “bitter campaign” and that “Mr Trump may be given wisdom, insight and grace as he faces the tasks before him. Together we pray for all the people of the United States.”

Meanwhile, the Catholic Church issued a statement by Vatican Secretary of State, Cardinal Pietro Parolin, in which he said: “We give our best wishes to the new president, so that his government can be really fruitful and also we assure him of our prayers, so that the Lord may enlighten him and support him in service of his country, and of course, also in serving the well-being and peace in the world.”

“Now the decision has been made, and it’s time for both sides to come together and pray for their new president, and all those who have woken up feeling disappointed with this result. Wouldn’t it be great if the Church led the way in demonstrating reconciliation between those who have been at war in the last few weeks?”

The Catholic Herald pointed to the 50/50 split in Republican/Democrat voting and Ed Condon put a more positive spin on the outcome: “It is clear that neither political party speaks for the majority of Americans… The failure of both political parties presents Catholic and other civic leaders with a unique opportunity to speak to and for the concerns of a majority of Americans, and help shape the public debate, without the risk of appearing partisan.”

In the Baptist Times, Roy Searle forecast doom and gloom and asked: “How could the nation… elect a man accused of a series of sexual assaults who has demonised Blacks, Mexicans and Muslims and employed venomous language in his campaign, to the White House?”

Anglican evangelist Canon J John commented on the similarity with the EU referendum result: “They were both fundamentally protest votes; an assertive anti-establishment protest by those who feel hard done by against those in power who they hold responsible for their plight.”

The Methodist Church issued a letter which said: “Many of the statements made by President-Elect Trump during the campaign will prompt grave concern. Much of what was said was profoundly at odds with the beliefs and values of our Church.” The Church went on to offer prayer for Mr Trump and the USA.

“Trump’s victory is an opportunity to re-emphasise basic biblical values, moral and spiritual,
that have been neglected since the 1960s” – Clifford Hill p7