THE CROSS IN THE CROSSFIRE: A warning from the Third Reich

Published by the Evangelical Sisterhood of Mary

As we draw near to the time of Jesus’ second coming, it is his cross that will unite or divide us. How we perceive the cross will determine our future, and none of us will be able to dodge the issue indefinitely. For each of us personally, there will be a “falling” or a “rising.” 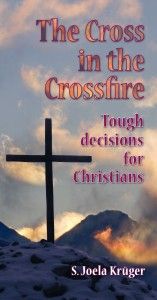 So writes Sister Joela in her introduction to a slim booklet which contains powerful truths.  This extract is used with permission and will continue in the next issue.

The Evangelical Sisterhood of Mary arose out of the ashes of World War Two in Darmstadt, Germany, when a young woman called Basilea Schlink experienced a revival of Christianity at meetings in her home.

With other young women she began to build “Kanaan”, a beautiful home base for the sisters in the rubble of her town, through opposition but always with humility and faith that God would provide.  One of the hallmarks of the Order is repentance and the Sisterhood has played an active role in addressing their nation’s role in the Holocaust, including arranging for German mayors to visit Israel.

It is therefore particularly appropriate to publish this extract now, after Holocaust Memorial Day, as the author begins by highlighting how a whole Church can be deceived.

Few people dared to swim against the tide in Hitler’s Germany.
Most were simply swept along.

Several million church members were deceived, blinded and led astray. Is this alarm bell from recent history shrill enough to rouse us from our indifference?

Paradoxically, the sheer horrors of the Third Reich serve to dull its sound. Yet latent in each of us lies such potential for blindness and deception that neither education, strength of character, nor even living in a Christian culture can guarantee us immunity. In all likelihood we will soon face a time of even greater testing. Will we heed the warning?

Jesus recognises the true extent of the danger. He sees how easily we are led astray. When the disciples asked him what signs would precede the coming of his kingdom, he did not give them a time frame or a checklist of coming events. He challenged them: “Watch out that no-one deceives you!” (Matthew 24:4).

Jesus knows our weakness. He also knows the strategies of the one he referred to as the prince of this world, a murderer and a liar from the beginning. Typically, this murderer clothes his lies in impressive language, camouflaging his strategies with a show of good intention. Christian vocabulary and the Christian concept of loving one’s neighbour suit his purposes perfectly.

As believers, we do not generally consider ourselves susceptible to deception – and that is what makes us so vulnerable. Living the lie of self-deception, we are easy prey for deception from other sources.

We have all the right answers, mentally distinguishing between Bible passages to be taken literally and those we consider outdated or figurative in the light of contemporary scholarship. We take particular care to avoid anything that could smack of fundamentalism.

What would Jesus’ perspective be? In John 9:41 he says, “If you were blind, you would not be guilty of sin; but now that you claim you can see, your guilt remains.” Do we want to face our blindness and be healed of it? The choice is ours.

The only effective safeguard is love for the truth, as we see in 2 Thessalonians 2:10. Our natural bent towards self-deception will be corrected as we dare to face reality. Each new painful revelation drives us to the cross, whether it concerns ourself or our family, our church or our fellowship, our home town or our country. Only at the cross can the truth be transformed into grace. An increased sensitivity to the truth enables us to see through the thickening fog of deception around us, as we come into closer unity with the King of Truth.

Jesus said, “Everyone on the side of truth listens to me” (John 18:37). Our ability to hear his voice depends on our love of the truth.

With his education, Paul could have taught on a number of themes, yet he “resolved to know nothing … except Jesus Christ and him crucified” (1 Corinthians 2:2). Although he wrote a stirring chapter on the significance of the resurrection, his real passion and the focus of his teaching was the cross.

Considering the high intellectual standards of his readers in the church at Corinth, this was expecting a lot, even then. Things haven’t changed. 1 Corinthians 1:18-19 could have been written today: “The message of the cross is foolishness to those who are perishing, but to us who are being saved it is the power of God. For it is written [Isaiah 29:14]: ‘I will destroy the wisdom of the wise; the intelligence of the intelligent I will frustrate.’ ”

Whether it fits our mindset or not, the fact remains that God in his wisdom took the stone that the master builders had rejected and set it in place as the cornerstone (Psalm 118:22).

The past two centuries have seen many able minds, in theological faculties and elsewhere, wrestling with this “foolishness”. Even in mainstream denominations there is a growing trend to question whether the crucifixion can be seen as an atoning sacrifice, or at least to minimise the offence of such a concept.

From a human point of view, all this is understandable. Surely we should welcome any attempt, after 2000 years, to do something about “the greatest misconception in the history of Christianity”? Yet in other parts of the world, 200 million Christians are willing to suffer for this “misconception”. Each year between 90,000 and 175,000 Christians go to their deaths because Jesus and his sacrifice on the cross mean more to them than their own lives, whereas we Western Christians are counted among the blind for whom Jesus is often worth little more than “thirty pieces of silver”.

Why don’t we pray in earnest for a renewal of our first love for Jesus so that we can share the spirit of the martyrs from our own churches? One of these was Pastor Ludwig Steil, who died in Dachau on 17 January 1945. Beginning theological studies as a young man of 20, he wrote, “It is my daily prayer that I will not only speak of God and act ‘by virtue of my office as an ordained servant of the Church’, but also preach by the Spirit of God and serve in the strength of his authority.” Later he wrote, “Christianity has inoculated so many Christians against Christ. Hiding behind traditions, outward forms and rites, they shield themselves from his demands.”

As early as 1938, Steil was implicated in criminal proceedings on five separate counts arising from his comments concerning the anti-Christian dictatorship. When things were getting really tough his wife expressed her support with the remark, “If they do come for you, at least we know that the Church’s main sin has been keeping quiet when it ought to be speaking out.”

If we are not prepared to accept that Jesus is the Son of God who died in our place as a sacrifice for sin, the crucifixion simply becomes a brutal act of violence and oppression.  Many Muslims see it this way. The belief that God has a son and that his son was crucified is blasphemous and abhorrent to them.

In the light of this it doesn’t take much theological training to work out that Allah cannot be the father of Jesus Christ.

Is the cross becoming an undesirable symbol even in Christian circles? Certainly the image of the crucified Lord seems to be more than our present generation can stomach – once again he is “one from whom people hide their faces” (Isaiah 53:3). Yet for all who have come to know Jesus personally and experienced his transforming power, the cross becomes the focal point of their lives. As we turn our eyes on our crucified Lord and consider the price he paid to redeem us, the cross becomes our source of strength in this life and comfort at the approach of death.

The cross is the symbol of our salvation but also of the uniqueness of Jesus Christ. It is this claim to uniqueness that is the stumbling block on the path to a unified world religion: a stumbling block that can never be removed. The interfaith movement will ultimately see Jesus Christ crucified as a hindrance to unity and world peace: the offence of the cross will somehow have to be side-stepped. Legitimate efforts to work together towards global peace can involve dialogue between religions. But when interfaith prayer is included, our natural desire for peace and harmony with all people of goodwill becomes the focus. Peace with God takes second place. A compromised interpretation of the cross of Jesus is the price paid for a broader basis of mutual understanding. It is here that today’s open-mindedness and tolerance turn narrow and intolerant. The tipping point comes when Christians put their faith first and refuse to deviate from the truth of the Gospel.

If there is to be genuine unity among Christians, our crucified Lord must remain the centre of our faith and our lives. This is how the old barriers of mistrust and suspicion will be broken down. The one flock of the one Shepherd will gather at the foot of the cross, joining together in an all-out effort to save others from the darkness of this world. They will work for his kingdom to come and his will to be done.

Among those aiming for unity, the two strands are still difficult to tell apart. But sooner or later it will become evident that they are headed in opposite directions. The unity of true believers will lead to the completion of the Great Commission, and will prepare the world for Jesus’ second coming. In contrast, the unity of a global human family is a requirement for the emergence of a World Religion in conjunction with World Government, and will prepare the way for the appearance of the Antichrist. We are entering a crucial phase.

Copies of this booklet are available from:

General information about the Evangelical Sisters of Mary is available on their website: www.kanaan.org (click on the British flag)