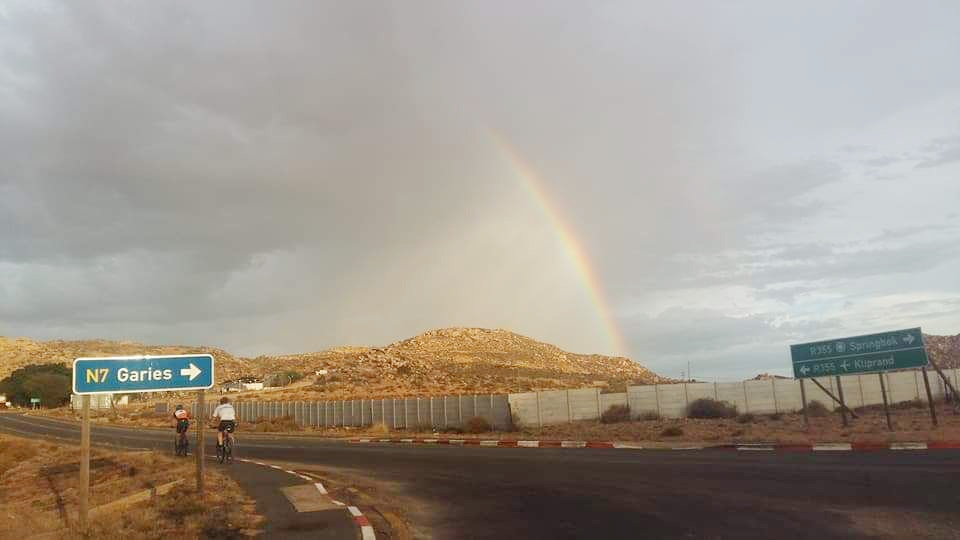 CAPE TOWN, SOUTH AFRICA (ANS – February 19, 2018) – News of the resignation of Jacob Zuma as South Africa’s president comes as a great relief following allegations of corruption that have hung over the country like a dark shadow for far too long.

And it coincided with a literal downpour of heaven’s blessings as the drought-stricken land was drenched by an all-night cloudburst in the Northern Cape – I will explain more about that later.

Zuma’s longstanding refusal to budge from his position has further threatened the stability of an embattled nation already facing serious economic and social problems.

Cyril Ramaphosa, declaring himself “a servant of South Africa”, has been sworn in as his replacement, and I am hopeful of a brighter future for the ‘Rainbow nation’ that showed such promise following the success of its first-ever multi-racial elections in 1994. But the legacy of peace, prosperity and reconciliation left by Nelson Mandela was thrown to the winds of tribalism and strife that mirrored much of what has been going on in the rest of Africa.

The dawn of the New South Africa, you may recall, was preceded by a very worrying time when civil war looked a real possibility – and was widely predicted by the media – as the Zulu-led Inkhata Party threatened not to cooperate with the transition talks.

Thankfully, South Africa’s many Christians flooded sports stadiums to pray for a resolution, and Christian leaders like Michael Cassidy were used by God to broker peace. The nation was pulled back from the brink as a result, relatively little blood was spilt, and a wonderful new era dawned.

Tragically, in recent years, lack of leadership with integrity, along with non-cooperation with all parties of goodwill, has left a trail of destruction in its wake – violence, especially in rural areas, is rampant, along with corruption, unemployment and disease. And with the ruling African National Congress party strongly influenced by Marxism, South Africa has inevitably climbed onto the bandwagon of political correctness where anything goes except good, honest living according to God’s standards. Part of the government’s PC dogma is a thoroughly nonsensical accusation that Israel is now practising the ‘apartheid’ that so blighted South Africa, and they are using this as an excuse to downgrade diplomatic relations with the Jewish state.

The irony of the earlier threat to peace posed by Inkhata is that Zuma is a Zulu. But I don’t wish to taint the rest of his people – the country’s largest ethnic group – with his alleged corruption. They are a wonderful tribe; I was virtually brought up by a lovely Zulu woman, Agnes Nzimande. Indeed, they were once great warriors, who even defeated the British at the Battle of Isandhlwana in 1879, and their present King, Goodwill Zwelithini, is reputedly a believing Christian who has bravely challenged the government over their anti-Semitic stance against Israel, urging them against loosening ties.

Wrong relationships have caused all these problems; politicians have allowed themselves to be influenced by the wrong people, leading to division and corruption. But we worship a God who is, above all, a God of relationships. He himself is not alone, but acts in harmony with the Son and the Holy Spirit, and he calls us into a relationship with him. And when this happens, we also come into a right relationship with others. The greatest commandment, according to Jesus, is to love the Lord with all our heart, soul and mind; and to love our neighbour as ourselves. (Matthew 22.37-40)

But there is now another rainbow of hope on the horizon. Before I had even heard the news of Zuma’s fall, my wife and I were still in bed having a WhatsApp conversation with friends in South Africa who were touring the Northern Cape encouraging farmers to keep trusting God through these difficult times, especially the long-running drought that has blighted the country for so long. Not surprisingly, there has been much prayer for rain.

Our friends – Julian and Trish Southey (Julian was my best friend from boarding school days over 50 years ago) – were escorting another couple on a ministry tour of the region, and were travelling to a distant farm to hold a Bible Study on the eve of Valentine’s Day. On arrival, they could see a black cloud heading their way, and during the evening there was an almighty downpour. The heavens opened and the farmers were ecstatic. They rushed outside to measure it, and reported that they hadn’t seen that much rain in ten years.

But much more was to come! Our friends left the farmhouse at 10.45pm, but due to the downpour, and their planned route being rendered impassable, they had to make a 100-mile detour over very rough roads to return to base.

It took them all night. Their truck got stuck in deep mud, and it must have been a frightening experience watching a river of floodwater rushing past as they prayed for help, which eventually came complete with a tow-bar to extricate them from the mire.

Their ordeal was matched with much joy, of course, because these God-fearing farmers have been faithfully praying for an end to the drought for a long time. The picture above was taken next morning – a rainbow (promise of God’s faithfulness) of hope now hangs over the land, no longer parched but drenched by the goodness of God. And it stands as a reminder that South Africa’s only long-term hope is to put their trust in the only One who can supply the rain, while at the same time putting their relationships right – first with God, and also with one another.