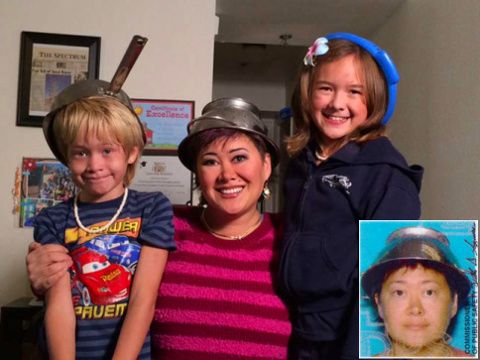 Photo: Asia Lemmon, seen here with her children, was given ‘religious’ exemption to wear a colander on her head for her driving licence photo (inset)

Asia Lemmon recently had her Utah driver’s licence photo taken while wearing a colander on her head.  Why is this news?  Because she successfully claimed a religious exemption to Utah’s requirement that all such photos be taken without headgear.
Lemmon is a member of the Flying Spaghetti Monster movement also known as Pastafarianism.  The group was started in 2005 as a protest against teaching intelligent design in Kansas schools.  Lemmon is an unusual spokesperson for them: her legal name is Jessica Steinhauser, but she performed as a porn star under the name Asia Carrera.  When she appeared for her driver’s licence photo, her protest was already old hat, so to speak.  About a dozen Pastafarians have done the same thing in recent years.