Meriam escapes and ‘trusts in God’ 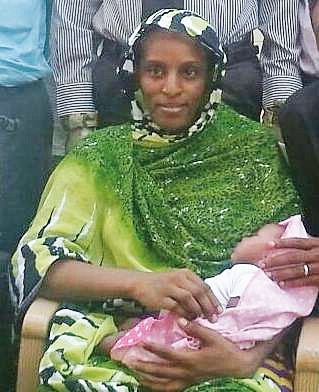 MOTHER OF TWO MERIAM IBRAHIM has now met Pope Francis after the Italian government arranged her flight out of Sudan.

Meriam hit the international headlines after she escaped a Sudanese court’s sentence of flogging and hanging – a sentence handed down when she pregnant – for alleged apostasy.

The outcry, especially after she gave birth to a daughter while in chains, led to her sentence being quashed and an appeal court released Meriam and her toddler son Martin from prison.

But their first attempt at a new life in theUSended when security officials rearrested her and husband Daniel atKhartoumAirportin June on trumped-up charges of forging travel documents.

However, after the Italians’ intervention, a Sudanese passport was suddenly given to Meriam, who had been sheltering in theUSembassy inKhartoumwith her family.

Lapo Pistelli, Italian Vice-Minister for Foreign Affairs, guided them on board the plane toRomeon July  24 and posted a Facebook photo of the family with the words, ‘mission accomplished’.

Pope Francis then saw 27-year-old Meriam for half an hour at hisSanta Martaresidence inside theVaticanand thanked the brave woman for her witness to her faith.

Meriam, a doctor by training, said: “I will put my trust in God as I always have done. We will start a new life. My husband is a chemist but he lost his job because of my story. Now we will go and live in New Hampshire (USA). We will all be together like a real family.”

Meriam later met up again with Italian journalist and human rights campaigner Antonella Napoli, who had originally visited the family at theUSembassy inKhartoum. Both Daniel and toddler Martin are joint US and South Sudanese citizens.

Ms Napoli said: “Meriam knows that she and her family will be safe only when they are very far from Sudan.”

Meriam was brought up as a Christian by her Egyptian Orthodox mother after her Muslim father left when she was six. She was also found guilty of adultery for marrying a non-Muslim man, even though she has always been a Christian, and converted to her husband’s Catholicism in December 2011.

A man called Al Samani Al Hadi Mohamed Abdullah also claimed to be her brother and tried to prove she was a Muslim, but Father Mussa Timothy Kacho, Episcopal vicar for Khartoum, signed a statement saying Meriam has ‘never been a Muslim in her life’.

The Bishop of Tambura-Yambio in South Sudan, Eduardo Hiiboro Kussala, said Meriam’s case is not isolated – and called the legal situation of Christians inSudan‘worrying’.

Faiza Abdalla, another Sudanese woman, is currently in jail facing a death sentence for similar reasons as the Meriam case – alleged apostasy. She had gone to a registry office to get an identity document when she was arrested.