“Humanity, you have been warned” 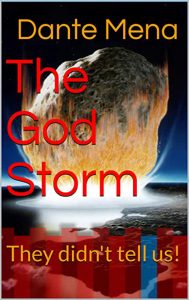 Here’s a Christian book that thinks outside the box and is probably not bedtime reading!

It is the result of a lifetime of research on matters not openly discussed in academic or even Christian circles.

Matters not openly discussed in academic or even Christian circles

Dante Mena, a 72-year-old Hungarian who spent most of his life in New York, says he has written his books (‘The God Storm’ is one of five) because “Modern man, even in many religions, has taken notice of meteors and astronomical events, accepting evolutionary theories while totally forgetting that it is God who is in control. Thus biblical events … foreseen by prophets, came true through astronomical events (meteorites, comets, etc).

“Modern evolutionary science has discovered the truth but has turned away…deceiving and influencing many. Thus, the greatest discovery of the modern era is buried… that God is real…proven in biblical events that are real, in which God has used the “heavens” to sign his will onto human experience… it proves that Jesus Christ will return amidst a worldwide conjunction of astronomical and earth events which non-believers will not understand, but true believers will not be afraid!”

The author believes his books may be suitable for “post” and “pre-trib” believers, and as a “tool to convert non-believers.”

The book opens with many illustrations of meteoric impact on the planets, including earth. So the reader is immediately aware of dangers from outer space! Mena then reviews dramatic biblical accounts like Noah’s Flood, the tower of Babel, Sodom and Gomorrah, the Exodus and Joshua’s victory over Jericho, and asks “What do they have in common?” In a word, “catastrophe”.

Dante Mena consults over 200 historical and scientific references in an attempt to explain the various catastrophes behind these biblical accounts.

For example, scientific and historical records suggest that Sodom and Gomorrah were destroyed by at least one meteorite and the resulting firestorm. And the extent of the destruction seemed much wider than just these two cities.

Then there’s Babel. The Bible doesn’t explain how God scattered rebellious men, but many ancient references from across the world refer to a monstrous hurricane (which, we are assured, can be expected in a meteoric impact). The author even suggests that Noah’s flood and the Exodus were linked to such cosmic impact.

While parts of the book may look like scientific speculation, to his credit Mena also uses his analysis of these events to repeatedly reject Darwinian evolution.

Shouldn’t the Church be reminding the world that one day soon God will again demonstrate his awesome power?

After examining each catastrophe, Mena makes the same valid point: surely these historical demonstrations of God’s awesome power are a warning to today’s rebellious nations? He argues that there are limits to how far God will tolerate our rebellion. To quote one reference, “the threat of cosmic-scale catastrophes remains very immediate”.

The author agrees, with a brief reference to Revelation. He has a point here. Shouldn’t the Church be reminding the world that one day soon God will again demonstrate his awesome power, as in the trumpets and bowls of Revelation? Doesn’t Revelation 8 refer to a catastrophic asteroid impact?

‘The God Storm’ has grammatical shortfalls and sometimes makes conclusions without concrete evidence. Mena tends to associate most past catastrophes with meteor impact, which may be stretching it.

On the other hand, he has consulted over 200 mainly secular or non-biblical references and makes some interesting points. An unusual presentation and refreshingly non-PC. His overall message could be stated as: “Humanity, you have been warned. Look at past catastrophes, take note and look to Jesus!”

He closes with a plea to the reader: “We are rushing toward a day of reckoning. Your only hope is in the love of Jesus Christ”.