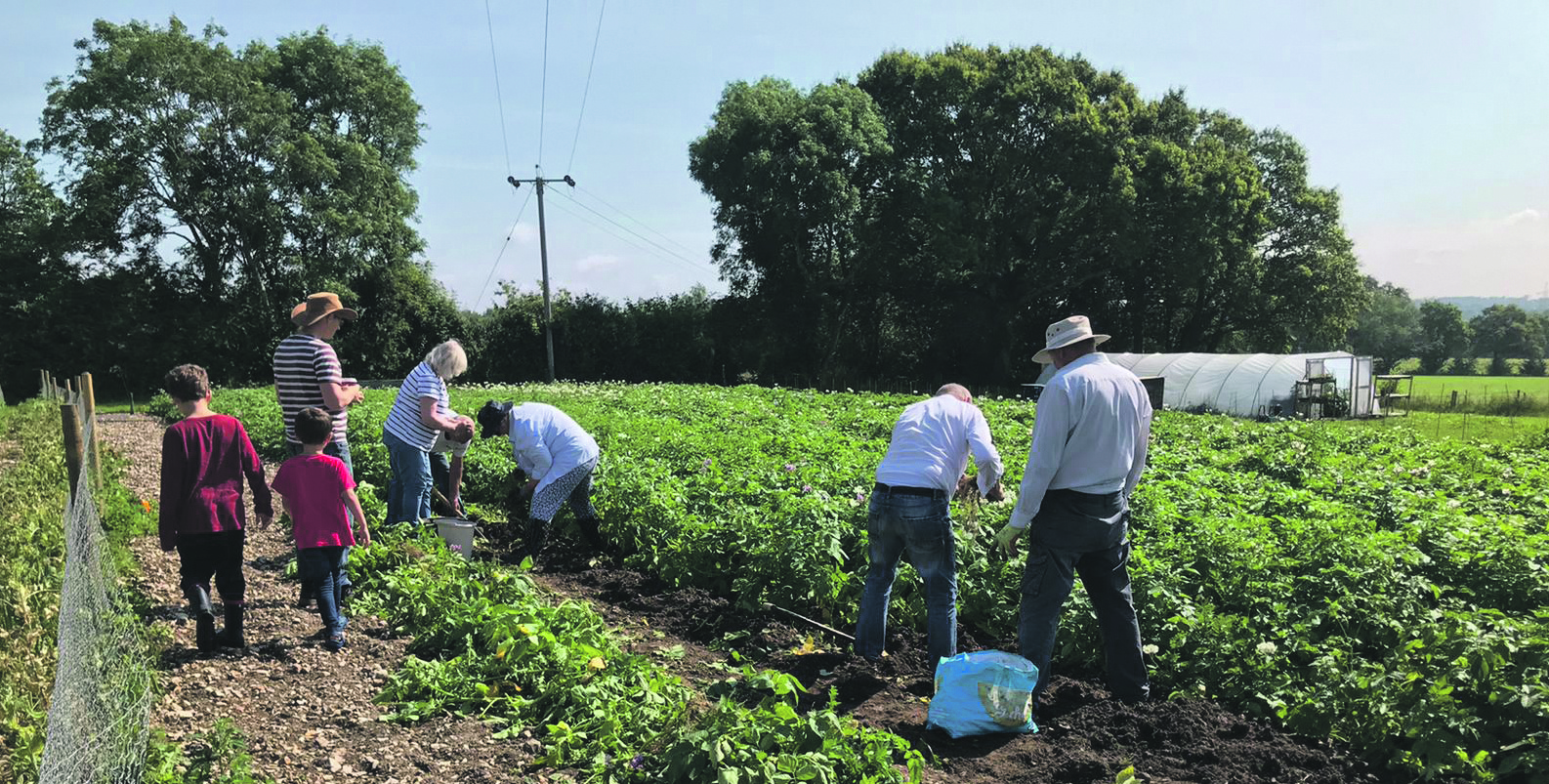 When Chris Wickland, pastor of Living Word Church Network, received God’s instruction to “Feed my sheep”, he responded both spiritually and literally – which resulted in a church allotment and bumper harvest

For 20 years I have been receiving dreams and visions about financial collapse.In one, I saw a bank on Canary Wharf collapse, followed by the others.So both I and my wife, Tracey, who also receives prophetic dreams, believed that we were to prepare for very challenging times.

We have 200 church members across four Hampshire churches, as well as five children of our own, three of whom are still at home with us, but knew we had to find the time to prepare.Moreover, God was giving us principles to thrive (not just survive) in economic famine, which I shared at a recent conference called ‘A crash course to thrive in economic collapse’ and hope to share these in more depth in future issues of HEART.

We have to trust God and keep sowing (giving) spiritual seed.

One of the hindrances to receiving supernatural supply in a time of financial famine is that many Christians limit their personal giving according to their current financial or practical situation. This is walking by sight and not by faith. We cannot trust in reason or logic but must trust the Word of God and live by the leading of the Holy Spirit.

James 1:7 is very specific; if we ask from God and doubt, then we shall receive nothing from God. I have found that an important key to remedying double-mindedness is biblical meditation.

Meditating on the Scriptures enables the Spirit of God to get the Word into your mind and your heart/spirit in one hit. This is invaluable in helping the Christian guard against the problems posed by an intellect that’s fully convinced – but where the heart is not – and vice versa.

To know the signs of the times and not act is to be a “hearer of the word and not a doer”.

An excellent example of faith borne out in works is found in Acts 11:27-30 where Agabus stood up and warned the church of a coming famine. The people responded by collecting and storing supplies from various churches to help those churches affected by the famine.

Firstly, we encouraged all our church members to store a minimum of one to three months’ supply of food.

This will not just be to help the individual, but also family and neighbours, in response to God’s call throughout Scripture and in Isaiah 58 to share our bread with the poor and needy.

The only way we’ll get through this is as a community. We’re stronger together and have more buying power.

When the world’s props go and there’s economic collapse, people will seek answers, so Christians shouldn’t be running around in fear like headless chickens. When I received the prophecy about a time that will be known as ‘the golden age of the Church’ (published in HEART’s February/March issue), it was clear that this revival will be born out of adversity.

Secondly, we believed that God told us specifically to “Feed my sheep”, which we understood to be both spiritually and practically.

On the spiritual side, I started podcasting and YouTubing under the name of ‘Storehouse 7 Ministries.’ I have made a 60 episode series on the book of Revelation, (currently working through chapter 14) and a lot of sessions on faith, provision and prophetic words. Our Sunday sermons are specifically geared to engender faith and an intimate knowledge of God.

On the practical side, we met with our leaders and trustees to confirm the instruction and work out how much it would cost to feed our particular flock.

As a team, we agreed to budget to feed people for three months, including the costs of storing food.

At that time, we were already hiring a field from a Christian farmer where we held our weekly church services during the Covid-19 lockdowns. When we discussed our plans with the farmer and his wife, Eric and Jean, they agreed to plough an acre of their land for the church to use as an allotment. It turned out that they had already had a vision from God that the field was to be used in this manner and were excited to see things coming to fruition!

The food storage cost around £20,000 for 2,000 people (allowing for friends and neighbours and another £5,000 to set up the allotment with a poly tunnel and the other kit we needed. Including stuff for this year we are looking at around £28,000, which is not bad.

We began our big allotment project in early 2021. It was a daunting task! An acre doesn’t sound very much until you stand in it and realise that you have got to work this ground to make it grow vegetables from literally thousands of small seeds.

Hardly any of us had any experience in growing veg and I have always failed miserably at making things grow in my own garden. But in obedience to God’s word, faith producing works, we set to sowing our seeds.

We had a church work party to build a 60 foot poly tunnel in a day to get the growing session underway. As much of the work is done during the week, we found that only around 30 could commit to helping, but 30 was plenty to work one acre.

I couldn’t see how anything was possibly going to grow on our big, stony patch from these tiny, lonely seeds

We then divided our land into five sections: onions, legumes,roots, potatoes and brassicas, with one family or couple responsible for each section.

We sowed our seeds joyfully and with some trepidation. I must admit that my faith was just like the size of the mustard seeds! I couldn’t see how anything was possibly going to grow on our big, stony patch from these tiny, lonely seeds!

But we were obedient to the prophetic word and sowed seed and prayed over the land as we planted.

We worked together, met together, prayed together, day in and day out, and God blessed our efforts with his abundant increase

Then came harvest time, and oh boy, what a harvest! We had vegetables with yields and sizes I had never seen before.

Most of our parsnips were monsters – a foot long and around 8 to 10 centimetres wide! Butternut squash, courgettes and marrows of sizes not seen in a supermarket were growing in extravagant plenty.

In fact, pretty much everything we sowed grew beautifully. We did lose a few crops to blight, but overall the field was a roaring success.

We had a little stall where people could take free vegetables or give an offering. Then 50 per cent of the money raised was given away and the other 50 per cent went back into buying more seed.

On top of that, we grew as a community. We worked together, met together, prayed together, day in and day out, and God blessed our efforts with his abundant increase.

We do believe God gave us a year of grace and a trial run as we now move into more trying financial times where those huge squashes will be a lifeline for our people.