Celebrating 30 years since the fall of Communism, which opened the way for ‘imprisoned’ Jews to return to Israel

DONCASTER, October 18, 2019 – The immigration to Israel of a million people from Russia since the fall of Communism is a miraculous and moving story. 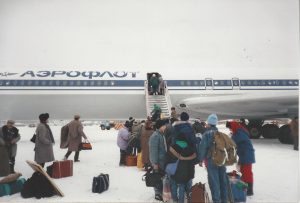 But it couldn’t have happened without the support of Christians like Fred Wright who left the world of academia three decades ago to help Jews fulfil their destiny by returning to the Promised Land.

A 72-year-old former head-teacher, lecturer and pastor from Colchester in Essex, Dr Wright has been risking his life, enduring many hardships and privations, while carrying out the task he believes all Gentile Christians should support.

And in a second look at extracts from his new book, A Banner to the Nations1 – launched to mark 30 years’ involvement in Christian Sponsored Aliyah – we share more inspiring adventures of this phenomenal movement.

Among the most moving was that of a very disturbed lady who walked the streets of a Ukraine village shouting and screaming until one of Fred’s colleagues – named Inga – asked her what was wrong.

It turned out she had been an abortionist with the Red Army Medical Corps, and could not sleep or live with herself because all she could see were the countless faces of the lives she had ended.

When Inga quietly comforted her and rebuked the evil spirit, the distraught lady calmed down and was told there was forgiveness through Messiah.

Following prayer, she was immediately restored to her right mind. Onlookers were so astounded they fell to the ground to seek their own redemption.

She went on to live a happy, normal life, and became an enthusiastic member of a Bible study group as she awaited the Aliyah (Jewish immigration) process. Sadly, she died before it was completed but did so in peace, with the love of Jesus in her heart.

On another occasion in the former East Germany when Fred and colleagues were away on a dangerous assignment, his wife Maria was called upon to lead a house meeting for members of four local churches.

Problem was, she didn’t speak German and nobody there spoke English! Maria recalls: “We started with a prayer and Bible reading and, to my utter amazement, the Holy Spirit enabled me to take the meeting in German!”

Fred was in East Germany at the time the Berlin Wall came down, and recalls the thrill of witnessing the sudden emergence into spiritual light and freedom of a people who had been walking in thick darkness and oppression.

He notes that it was the East German Christians who, through prayer, perseverance and peaceful protest, sparked the collapse of the regime. (Is there a lesson here for Christians in Britain coming under increasing pressure to conform to atheistic secularism?)

In a 1989 speech prepared for the 40th anniversary of communism there, dictator Erich Honecker proudly proclaimed that the Berlin Wall would stand for another 100 years and repeated the Marxist position that communism would ultimately triumph and rule the world.2

But the speech was to be his swansong as the regime came to an abrupt and unexpected end within months. An estimated 300,000 people joined a protest march past the Stasi headquarters, and Honecker resigned on October 18th.

“It was a great privilege to be associated with the movement,” Fred wrote. And it was all part of the package of being involved in the end-time re-gathering of Jews to their ancient land.

A conference celebrating 30 years of Christian Sponsored Aliyah will be held in Sheffield on Saturday, November 16th – at the Bushfire Church, 427 Halifax Road, Grenoside S35 8PB, starting 10.30am – featuring Fred, myself and the Sh’ma Kingdom Dancers.

Along with Chesed-IM (Messianic Chesed in the former Soviet Union), Fred works alongside and is advisor to an organisation called Ezra UK, whose ministry is focused mainly on facilitating the required documentation needed – usually the biggest headache for those who have little actual proof of their Jewish heritage. He is married to Maria who has accompanied him on many of his adventures along with his youngest son Daniel.

1From KDF Chesed Publishing, the book is available via Amazon, Ezra UK and www.lulu.com

2Two years earlier, in a direct challenge to the Soviets, US President Ronald Reagan predicted its fall, saying that it could not withstand faith, truth and freedom.