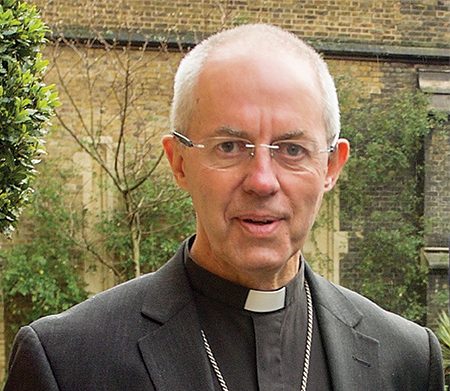 The Archbishop of Canterbury has revealed that he receives prophetic letters every day and that he speaks in tongues during early morning private prayer.

This was reported in a slightly mockingly toned article in The Times, titled ‘The Archbishop of Canterbury says God speaks to him through the post.’

Religious Affairs Correspondent Kaya Burgess claimed that the head of the Church of England “searches for divine revelations in letters from believers… who feel that they have received a communiqué from God.”

What actually happens is that Welby receives a lot of letters from the public that claim to be prophecies from God for him, and he has to discern those that he believes are correct. He also spends time every day praying in tongues – the spiritual gift of an unlearned language that the Bible teaches comes through the Holy Spirit and is available to all believers.

The admission was made when the Archbishop of Canterbury was speaking to Premier at the launch of Thy Kingdom Come, now in its fourth year, which has united over a million Christians from more than 65 different denominations and traditions, in more than 114 countries, to pray for evangelisation. It takes place between Ascension to Pentecost which this year is 30 May to 9 June.

“What has surprised me is the number of people who have got involved. Methodists, Catholics, Orthodox and Pentecostals are all piling in. This is not a Church of England thing, this is a Church thing.”

Welby continued: “It’s very unusual for something like Thy Kingdom Come to gather churches together on such a global basis. I don’t think it’s unique, I think it’s biblical. It started by looking at what the disciples did between the Ascension and Pentecost.

“During that time, they prayed and the Spirit came. This movement has no deeper rationale than the command of Jesus. He said ‘go back into the city and pray for the Spirit of God.’”

The practice of ‘speaking in tongues’ is a phenomenon in which Christians speak in languages unknown to the speaker, or in a ‘divine language’ when praying to God or as an act of worship. ‘Words of knowledge’ and ‘prophecy’ are messages people believe to be revelations given to them by God about people or future events. Both are common practices in pentecostal and charismatic churches such as Holy Trinity Brompton, London, where Justin Welby was a member before becoming a priest in the Church of England.

Acknowledging that he prays ‘extremely early in the morning’, the Archbishop said: “In my own prayer life, and as part of my daily discipline I pray in tongues every day – not as an occasional thing, but as part of daily prayer.”

He went on to say how he has also been encouraged by those words of knowledge and prophecy. “I expect to hear from God through other people with words of knowledge or prophecies – some of which I am unsure about, others I can sense there being something of the Spirit of God.”