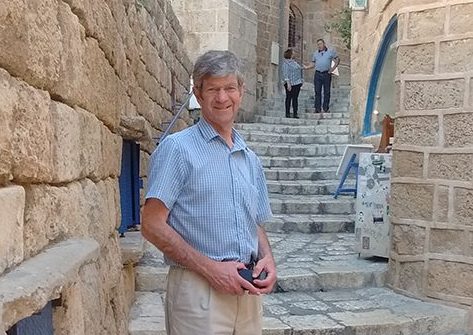 The appointment of Israel’s first ever Christian Arab ambassador is partly thanks to a Jewish musician who, alone among his family, survived the Holocaust.

In a recorded speech following his installation as the Jewish state’s top envoy to Muslim-majority Azerbaijan, George Deek paid tribute to the man he named only as Avraham who became his music teacher.1

It was because he played the harmonica so beautifully that his life was spared; a Nazi officer took him home to entertain his guests.

When he finally found refuge in Israel, he chose to use the means of his rescue – his music – to bring hope to others including Arab children like George, who duly learnt both flute and clarinet.

George’s moving story contradicts much of the narrative spewed out by the mainstream media about the Arab-Israeli conflict, especially the refugee crisis.

His family, who have lived in Jaffa (or Yafo) for 400 years, fled the city in 1948 in response to the warning from Arab leaders that Jews would turn on them when the new-born nation was attacked by the surrounding states, but that they would be free to return when Israel was defeated.

His grandfather, also George, had married in haste before fleeing to Lebanon, but when he realised that Israel had not been defeated and Arabs were not being persecuted, he managed to return and even got his electrician’s job back from Jews he had befriended before independence.

While acknowledging that it was indeed disastrous for the 700,000+ Palestinians who subsequently became unwanted refugees, he noted that 800,000 Jews had been more or less forced out of Arab nations at the same time – a fact that is now conveniently forgotten.

The Jews were absorbed into Israel, but the Arabs were not accommodated in the same way by the very states whose leaders had persuaded them to leave, thus creating an ongoing UN-backed stalemate in which the refugees are being used as political pawns.

“The Palestinians are held captive by chains of resentment,” he said.

By contrast, the Jews had responded to the tragedy of the Holocaust by securing their future. With respect to his music teacher, “he chose life, not death; hope rather than despair” and began teaching the very thing that saved his life to bring hope to others – especially amidst the tension that existed in Jaffa between Arabs and Jews.

Referring to the way in which Avraham spoke little and reluctantly of his tragic past, which he suggested was reflected by the general response of Jews to the Shoah, he said: “Only when they had secured their future did they allow themselves to look back at the past.”

Under the shadow of that great tragedy, Jews were able to build a country that leads the world in many areas. At the same time Israeli Arabs are the most educated Arabs in the world, occupying highly influential positions as judges, doctors and MPs, enjoying the right to criticise the government and diplomats like him.

George is not Israel’s first Arab ambassador – that distinction went to Ali Yahya, who was appointed Ambassador to Finland in 1995. And I have personally met Ishmael Khaldi – Israel’s first Bedouin diplomat.

Towards the end of his speech, George quoted the words of the Jewish patriarch Joseph, who reacted to the betrayal of his brothers in selling him to slavery by forgiving them and saying: “You intended to harm me, but God intended it for good to accomplish what is now being done, the saving of many lives.”(Gen 50.20)

Joseph emerged as saviour of his people, rescuing them from famine after becoming Prime Minister of Egypt, and was a picture of the Messiah to come who would be nailed to a cross by his brothers but who would also one day reveal himself to them as “the one they have pierced” (Zech 12.10), forgiving and cleansing them of their past sins.

Like so many of his cousins, George might well have become a Palestinian refugee without rights or citizenship, but – through God’s grace – he is an Israeli diplomat representing one of the most thriving economies on the planet.

I particularly like this story because of the crucial part played by the harmonica, an instrument I love to play myself and which can wonderfully enhance worship of God. And I also like it because of its setting in Jaffa, known in Bible times as Joppa.

It was on our last trip to Israel that my wife Linda and I got to know the city, which lies at the southern end of the Tel Aviv metropolis. And it was an awesome experience to discover afresh the vital role it had played in the biblical era.

It is where the prophet Jonah caught a ship for Tarshish in his vain attempt to run away from God’s call to preach to the cruel Ninevites – there is a life-size sculpture of a whale (complete with fountain) near the seafront.

Jonah too was a picture of the Messiah to come. For Jesus declared to his opponents that his credentials would be proven through the ‘Sign of Jonah’ (Matthew 12.38-40) who was buried for three days and three nights in the belly of the great fish before being resurrected on the beach.
Joppa was also a key location for the early church, and of another resurrection – Tabitha (or Dorcas) was raised from the dead there through the prayers of Peter (Acts 9.36-43). It was also the town of Simon the Tanner, in whose home Peter had the heavenly vision that was to open the way for the gospel to the Gentile world with his visit to the Roman centurion Cornelius some 40 miles up the coast in Caesarea (Acts 10).

It could hardly have been a more strategic place, leading to reconciliation at the cross for both Jew and Gentile. And now, 2,000 years later, an Arab Christian there finds hope – and status – in a Jewish world.

Who would have thought a Jewish state would appoint a Christian envoy to a Muslim country! Pray for George. God is surely at work.

Judgement on the nations