Religious racism has predictably reappeared in a time of plague

Mankind is in the middle of a crisis. 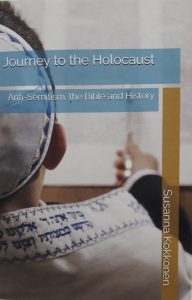 The perceived threat of a modern plague has intensified expressions of hatred in our society, so it is no surprise that Covid-19 anti-Semitism has emerged.

Indeed, there is a popular meme: “It is not a plague until it is blamed on the Jews.”

During history’s worst plague, the Black Death (1347-1351), over 75 million people perished. Although we know that it came to Europe on ships and was spread by rats, Jews were blamed for poisoning the wells, leading to many being murdered.

During the 19th century’s typhoid and cholera epidemics, Jews were again accused of spreading the virus. It happened again during the Spanish Flu of 1918.

Virus as an image

Anti-Semitism has always been very adaptable. Unsurprisingly, in this age of social media, awash with photos and short video clips, it is now very visual.

Most of us know that Jews were shown as lice and rats by the Nazis. Nearly a century later, pictures of viruses with “Jewish faces” are now all the rage on social media.

Anti-Semitism has always been adaptable

Another recurring idea is Israeli airplanes spreading the virus.

There is a tired trope that Jews “control” global events

“One of the most prevalent stereotypes about Jews is that they are greedy and value profit above all. From the first days of the coronavirus, anti-Semites have accused Jews of making money out of the virus: from the vaccine, by exploiting market volatility, or through loans.”

Most people would never admit to being anti-Semitic, yet they post questionable images.  Perhaps they are just being careless., but there are others who post these things with malicious intent.

Even well-meaning Christians have been sharing anti-Semitic memes

Even well-meaning Christians have been sharing anti-Semitic conspiracy memes.

The challenge to us is clear. We are not called to prejudice, hate and scapegoating. We need to stand with those who are being unfairly blamed. Moreover, we are called to offer hope. So, maybe that is what we need to spread on Facebook and Twitter.

We may not have an explanation for Covid-19, but we do have hope.

Dr Susanna Kokkonen, originally from Finland, has her doctorate in Holocaust Studies from the Hebrew University of Jerusalem. She is the author of ‘Journey to the Holocaust: Anti-Semitism, the Bible and History’, available from www.heartpublications.co.uk or call 01903 209383 if you don’t have internet access