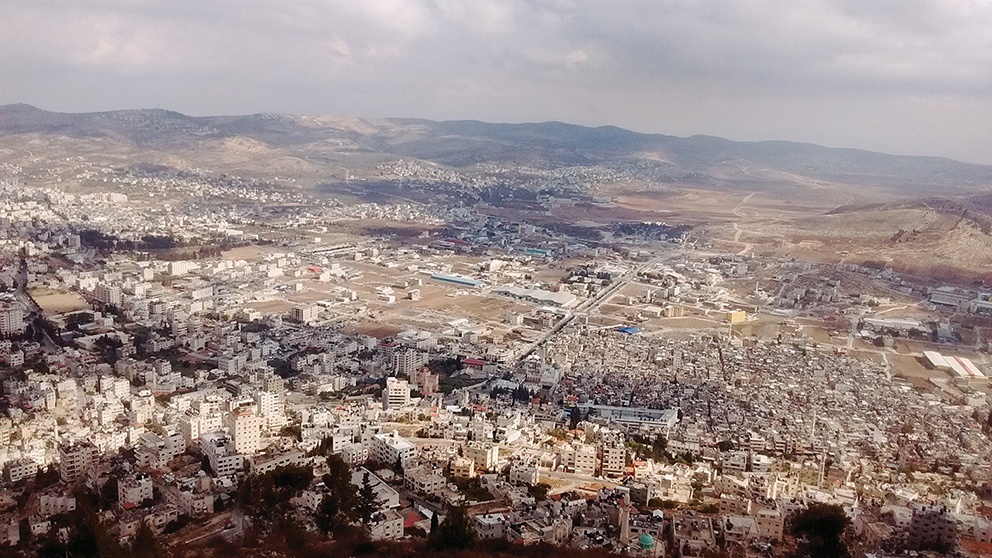 The mountains of Samaria represent the heart of Israel. Here is a view of ancient Shechem (now known as Nablus), home of Jacob’s Well and Joseph’s Tomb

Just as news was coming through of failed talks between Jewish leaders and Britain’s Labour Party chief Jeremy Corbyn, I was watching a TV presenter telling the harrowing story of anti-Semitic butchery in the land of his great-grandparents.

Following yet another debate on the subject in Parliament, during which Jewish Labour MPs received standing ovations after giving testimony to the flak they have had to endure, Mr Corbyn met with representatives of the Board of Deputies of British Jews and the Jewish Leadership Council.

But they were not happy with the result. In a joint statement, they said he had refused to agree to any of their demands, which included banning MPs from appearing with members under investigation by the party on the issue.

Mr Corbyn consistently acts and speaks as though he is the innocent party in all this, committing himself to strong statements of support for the Jewish community without being able to back it up with action.

That is surely because his hard-left agenda has attracted a swathe of followers who are, by definition, natural allies of those who hate Israel which, ironically, also includes far-right extremists and terror groups committed to the Jewish state’s destruction – an unholy alliance, if ever there was one.

Quite a tricky corner from which to extricate himself, really, barring an epiphany of sorts. And we can certainly pray for that.

Television presenter Simon Schama, meanwhile, used some grisly historical facts to illustrate the depravity of anti-Semites who, in the Russian pogrom of 1905, mercilessly decapitated Jewish people and tore their children apart limb from limb.

In the penultimate episode of The Story of the Jews on the BBC4 channel, he traced the history of his people in that part of the world; how they were forced to live in rural communities so that they were unable to compete with Gentile city businessmen. But they made the most of life and worked for the benefit of each other while always living in fear of assault – just for being Jewish.

Fortunately, many were able to escape to America which, with Zion not yet an option, became their New World paradise. Some two-and-a-half million Jews from Eastern Europe sailed to New York from the 1880s to 1920s and, in a substantial way, helped to build modern America – even shaping the emerging film industry in Hollywood and writing ‘the Great American Songbook’. In the latter case, the lyrics often reflected their own longing for peace and safety. In the hit Broadway musical West Side Story, Leonard Bernstein (the son of Jewish immigrants from Russia) and fellow Jew Stephen Sondheim would compose: “There’s a place for us, somewhere a place for us, peace and quiet and open air, wait for us somewhere…”

Yet just as Yip Harburg collected his Oscar for the song in 1940, the Nazi reign of terror was about to be unleashed in Europe with demonic fury.

If we claim to be a civilized society, then words from Mr Corbyn are not enough. Action is required. I’m sure he doesn’t want to find himself backing the wrong side in a Middle East conflict that might erupt at any moment.

For just as Jerusalem reverberates to the sound of singing and dancing in celebration of 70 years as a nation, threats to Israel’s existence are as belligerent as ever. They are surrounded by implacable enemies – specifically Hezbollah to the north and Hamas to the south – with sponsors Iran vowing to wipe the Jewish state off the map.

More worryingly, the Ayatollahs are infuriated by Israeli attacks on military targets in Syria designed to deter any further incursion of Iranian influence in the region.

Adding to the toxic mix is the involvement of Russia. So it could all blow up in our faces. Therefore, cool heads are called for – but not appeasers backing down at every threat of a dictator. That is why President Trump is such a breath of fresh air, insisting that the nuclear deal agreed by his predecessor must not be extended as it will only further encourage Iran to commit genocide against Israel.

He has also torn up the ‘rule book’ of Middle East diplomacy by ceasing to refer to Judea and Samaria as ‘occupied’ territories, infuriating the Palestinians in the process. As with the reality of recognising Jerusalem as Israel’s capital, the President is simply going a step further by bringing down the curtain on the fantasy world of Palestinian claims to the land.

They flatly refused the offer (of these territories) as part of the UN’s Partition Plan in 1947, Jordan then illegally annexed it during the 1948 War of Independence, and Israel took it back in 1967.

The mountains of Judea and Samaria represent the heart of Israel. Far from inflaming the situation, President Trump’s recognition of this disputed territory as belonging to Israel paves the way for practical thinking in the real world. Here is a President who will not buckle under pressure, but does want to see real peace. No amount of compromise over these past 70 years has ultimately done the trick.

Let’s pray for the peace of Jerusalem – and that Israelis will be able to celebrate their 70th birthday year in the perfect safety and unbridled joy that has so long eluded them.